Both Devanti Nayak and Fulmani Ekka often worked beyond the call of duty till late hours, says official at the civil surgeon’s office 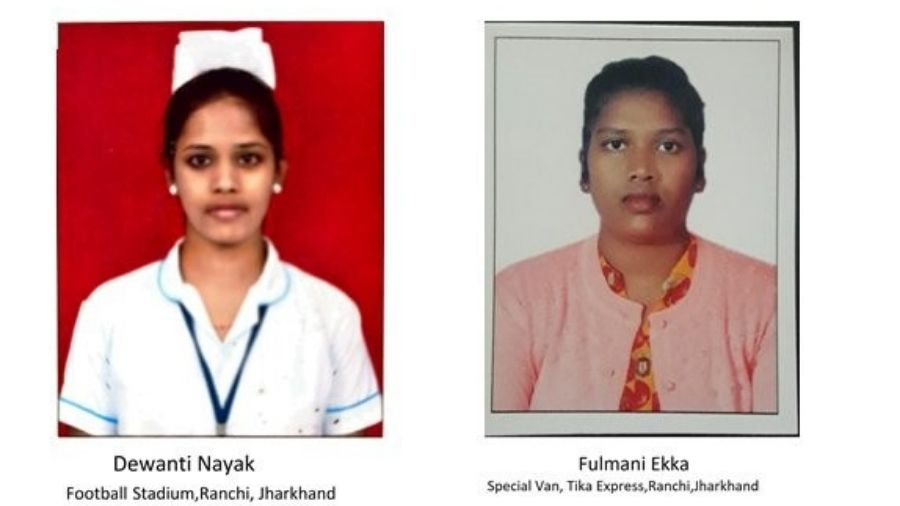 Two young auxiliary nurse midwives (ANMs) from Jharkhand, who are currently posted on Covid vaccination duty in Ranchi for over a year, will be awarded by the union health ministry for conducting the highest vaccinations. Both the awardees — ANM Devanti Nayak and Fulmani Ekka were nominated by the health ministry and will receive the award on Tuesday (tomorrow) on the occasion of International Women’s Day. Both are the outsourced staff and working as contractual employees with the district health department.

Ranchi civil surgeon Dr. Vinod Kumar said that both the ANMs had left for Delhi today to take part in the award ceremony.

“It’s a prestigious moment for the entire health department of Jharkhand and especially for Ranchi as two of our ANMs were chosen by the health ministry for the national award given by them for doing good works on the vaccination front,” he said.

Officials at the civil surgeon’s office said that both the frontline workers often worked beyond the call of duty since the start of the vaccination campaign in Jharkhand in early last year. “Devanti and Fulmani rarely took offs and dedicatedly served at their camping sites for hours from morning to evening daily to inoculate as many people as they could per day,” said an official.

While Devanti was posted at the football stadium in the Morabadi vaccine campsite, Fulmani was part of a mobile vaccine van (Tika express).

While Devanti’s phone remained switched off, 28-year-old Fulmani from Delhi said that she was excited to get the award. “Vaccination or fight against Covid-19 is actually teamwork and singularly one couldn’t do anything. So, I will dedicate the award to me to my entire team who worked with me at the Morabadi vaccine campsite,” she said, adding that so far she undertook close to 90,000 inoculations. Devanti too clocked similar figures serving on the mobile vaccine vans.

Recalling the initial days of vaccine rollout Fulmani said that they had to face tough times to convince people against vaccine hesitancy.

“There were times when we had toured door to door in different parts of the city to appeal people to take the vaccine. At times, we even faced heavy resistance requiring local cops to be called for assistance. The situation however has improved for good as hesitancy is over among the public,” she said, hoping that Jharkhand will soon achieve 100 percent vaccination of all its eligible population.