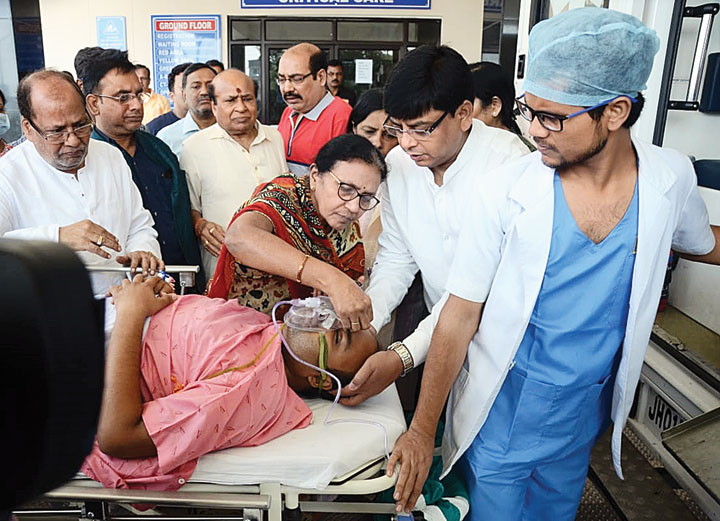 Rahul Kheriwal’s mother applies a tika on her son’s forehead at RIMS in Ranchi on Wednesday before his flight to Delhi for better treatment
Manob Chowdhary
Raj Kumar   |   Ranchi   |   Published 16.10.19, 08:08 PM

Jewellers here downed shutters for three hours on Wednesday to protest Monday’s gun attack near Lalpur Chowk on two members of their fraternity, asking pointedly why the police had not yet nabbed the assailants.

Under the banner of Sona Chandi Vyavsayi Samiti, over 500 jewellers shut shop from 11am to 2pm in solidarity with injured brothers Rahul and Rohit Kheriwal and demanded speedy arrest of five gunmen who had entered their jewellery store at a posh market complex posing as customers. Samiti president Ravi Kumar Tinku told the media that they would call for a Ranchi bandh if the criminals were not arrested within 48 hours.

“It is a question of security of those in our profession, all businessmen as well as the people of Ranchi,” Tinku said. “The criminals left the city within 25 minutes after shooting at the brothers in the heart of the city, despite being under electronic surveillance. Not only this, they also reached Bihar safely within five hours after they committed the crime. This has exposed poor policing in the state. In case the gunmen are not arrested within 48 hours, we will give a call for Ranchi bandh.”

Contacted, a senior police officer said they were working on several leads to nab the criminals. “Several teams have been constituted. One team has been sent to Gaya and another to Aurangabad, both in Bihar. Several teams are conducting raids based on intelligence inputs. We are waiting for a breakthrough,” he said, but requested not to be named as he is not authorised to brief the media.

Both the Kheriwal brothers, aged 35 and 40, who had been operated upon for bullet wounds at RIMS, Ranchi, were airlifted in ambulances on Wednesday to Delhi for “better post-operative care”, their father Banwari Kheriwal said.

Thanking the RIMS doctors for “saving the lives of my sons”, he added: “Based on consultations with family members, we decided to send Rahul and Rohit to Apollo in New Delhi (Indraprastha Apollo Hospital) by air ambulance on Wednesday for post-operative care. We understand post-operative care is vital to quick recovery. Otherwise treatment here (at RIMS) has been done properly,” Kheriwal said.

Rahul was seen speaking to his parents anxiously while being wheeled out of the RIMS trauma centre for Delhi in the morning. “He was worried about medical expenses, but I asked him not to worry about money and said I was getting support from my brothers. I said ‘we just want you two to recover completely’,” the father said.