Later, a delegation met governor Droupadi Murmu at Raj Bhavan and handed her over a letter expressing their grievances that was addressed to the President 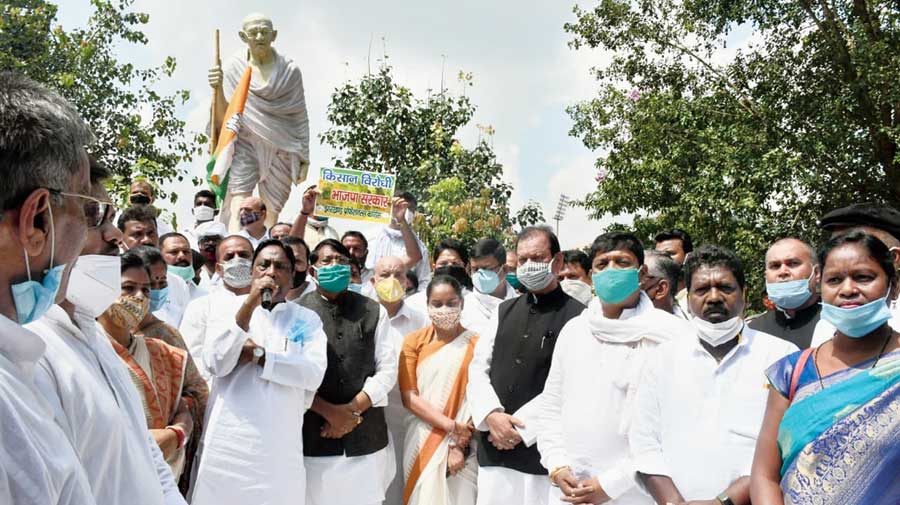 Congress leaders and members near Gandhi statue in Ranchi before their protest march on Monday.
Telegraph picture
Achintya Ganguly   |   Ranchi   |   Published 29.09.20, 12:18 AM

Jharkhand Congress ministers and MLAs, along with about 500 members and supporters of the party, marched to Ranchi’s Raj Bhavan on Monday to lodge their protest against the recently passed three farm bills.

Later, a delegation met governor Droupadi Murmu at Raj Bhavan and handed her over a letter expressing their grievances that was addressed to the President.

They assembled near the Gandhi statue at Bapu Batika at Morabadi grounds where they garlanded the statue of Mahatma Gandhi and held a meeting before beginning their march towards Raj Bhavan, about 2km away.

“The Congress will continue to protest till the bills that were passed in the Parliament are withdrawn,” former Union minister and in-charge of the party’s state unit R. P. N. Singh told the gathering, adding those involved about 62 crore farmers of the country and contract farming would affect their interests as well as those of the consumers.

“The Congress always supported the cause of the farmers,” said state’s food minister and party’s state unit president Rameshwar Oraon, reminding that Gandhiji had launch Champaran Satyagraha in support of the farmers in 1917.

“The farmers are the country’s annadata (food providers) but the Union government has surrendered their interests in hands of capitalists,” health minister Banna Gupta told reporters before the march began, adding that it was an attack against the spirit of the country.