Congress hits BJP where it hurts 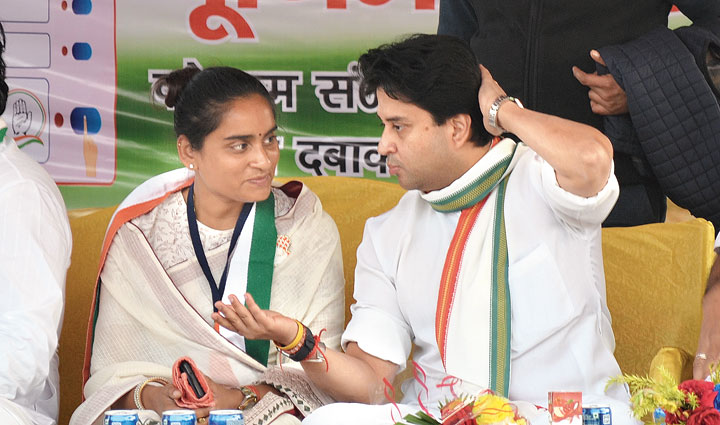 Former Union minister Jyotiraditya Scindia during a Congress rally in Jharia on Tuesday asked the BJP how GDP growth fall and development can go hand in hand.

The former Union minister of state for communications and information technology and also the general secretary of All India Congress Committee (AICC) for Uttar Pradesh (West) was in Jharia to address a public rally in support of local Congress candidate Purnima Singh, wife of former deputy mayor Niraj Singh, who was killed by a hail of bullets on March 21, 2017.

Addressing a gathering of around 8,000 people at Jealgora ground of Jharia in Dhanbad in the presence of AICC Jharkhand in-charge RPN Singh, district Congress president Brajendra Prasad Singh, and Purnima, Scindia in his 18-minute speech used Hindi proverbs and metaphors to ridicule the BJP government.

“Ek purani kahawat hai, marj badhta gaya, marj badhta gaya, jyon jyon dawa ki (the ailment started worsening as medicines were introduced),” he said, taking a dig at the failure of the government to control the falling rate of GDP.

Shifting the focus on the state government and lack of job opportunities in Jharkhand, Scindia said: “They have misled people in the name of achche din (good days) but the Jharkhand Public Service Commission (JPSC) and Jharkhand Staff Selection Commission (JSSC) have failed to provide jobs to a single person in the last five years. In fact the poor have become poorer.”

He said: “The Jharia town is endowed with huge coal reserves where people from outside came and left after minting money but the natives are compelled to live the life of penury because of wrong policies of the government which promotes looters.”

Trying to garner support from the gathering on the condition of the poor, he asked: “They (the BJP) are claiming they have provided more than Rs 33,000 crore to the people but has a penny of this fund reached the labourers working tirelessly? While the BJP government is concerned with the interest of selected capitalists, the Congress government used to frame policies for farmers and the downtrodden section of society. The support price of foodgrains used to increase during our (the Congress) times by 19 percent, while the support price is increasing by 3.5 percent during the present BJP rule.”