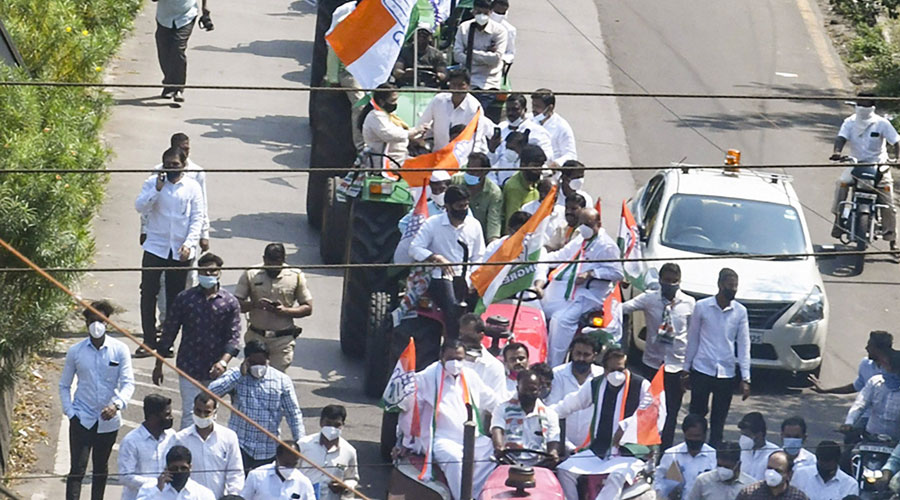 Farmer groups staged protests in different parts of Jharkhand on Thursday as part of the nationwide agitation called by All India Kisan Sangharsh Coordination Committee to protest against the three farm laws passed in September.

“Protests were held along state highways and national highways in the morning till 10.30am in different parts of the state as part of the call given by the national body. At some places there was chakka jam (road block), while at other places it was human chain protest,” said Rajendra Singh Munda, general secretary of the Jharkhand Rajya Kisan Sabha.

Sources said road blockades were staged by the farmers near Daltonganj, Lohardagga, Bundu-Silli state highway near Ranchi, Baharagora (in East Singhbhum), Khunti, Gumla, Chaibasa and in Tamar (near Ranchi).

There were reports of vehicular movement affected in some stretches for a few hours in the morning. “It was a symbolic chakka jam today. However, on November 26 we will organise a statewide agitation. We will also march to the Raj Bhavan and submit a memorandum to the governor (Draupadi Murmu) on November 27 demanding repeal of the three farm laws,” Munda said.

Farmer groups backed by the Opposition parties have been protesting against the three laws — Farmers’ Produce Trade and Commerce (Promotion and Facilitation) Act, the Farmers (Empowerment and Protection) Agreement of Price Assurance and Farm Services Act and the Essential Commodities (Amendment) Act — alleging that the laws will harm the farmers’  interest and benefit corporates, a claim denied by the Centre.

Farmers have expressed apprehension that the new laws would pave the way for dismantling of the minimum support price (MSP) system, leaving them at the mercy of big corporates.