‘The coronavirus threat is likely to continue, but businesses can't be stopped for an indefinite period’ 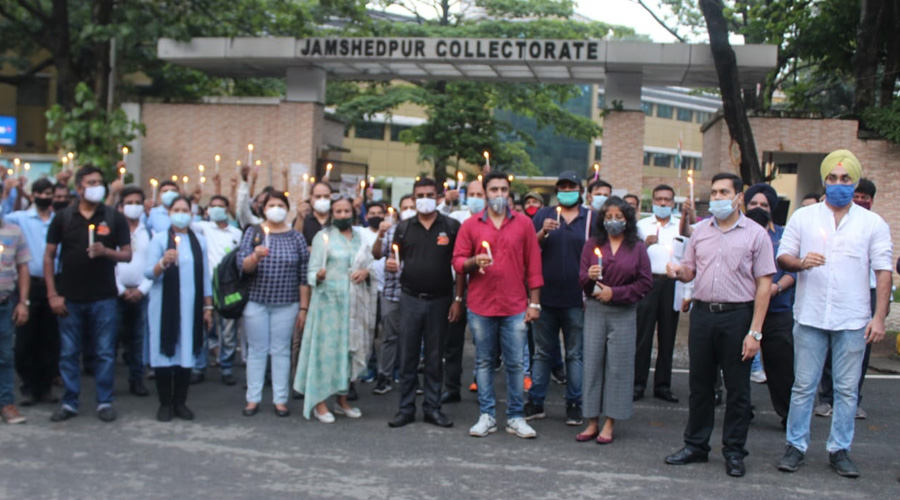 Owners of hotels and restaurants at a candle-light vigil near the deputy commissioner’s office in Bistupur, Jamshedpur, on Tuesday.
Animesh Sengupta
Our Bureau   |   Ranchi   |   Published 30.06.20, 09:38 PM

Owners of hotels and restaurants held candle-light marches on Tuesday to push the state government to allow them to resume their business that has already suffered unprecedent losses because of the three-month-long lockdown imposed as a result of the coronavirus epidemic.

Over 100 people, including a large number of hotel owners under the banners of Jamshedpur Hotel Owners' Association (JHOA), took out a march with candles and then congregated at the East Singhbhum deputy commissioner's office in Bistupur, demanding that they be  granted permission to reopen their establishments.

In Ranchi, as many as 40 hotel owners brought out a protest march from Station Road under the aegis of Federation of Jharkhand Chamber of Commerce and Industries (FJCCI), the apex trade body of the state.

“We are with the state government in its fight against the coronavirus but had to resort to such action since hotels have been allowed to function in some other states according to the guidelines issued by the ministry of home affairs but not in Jharkhand," said FJCCI general secretary Dheeraj Taneja.

He urged the state government to allow hotels to function in the state.  “The coronavirus threat is likely to continue, but businesses can't be stopped for an indefinite period,” he said, adding that hotel owners had supported their employees so far but could not do so any further.

Hotel owners in Jamshedpur were equally restive. After their candle-light procession, association secretary Randeep Bhatia, who led the march, said over four dozen hoteliers had been hit hard as their establishments were closed for the past three months.

"Though the Centre and state government are going to implement Unlock-2 from July 1 there is no word on reopening hotels and restaurant," Bhatia told The Telegraph Online.

He pointed out while the train and flight services had been resumed, because of which businessmen and professionals had started travelling, there was little reason to keep hotels shut.

“We are getting hundreds of queries and calls from professionals, including medical representatives of pharmaceutical companies, for bookings. But we have tell them that we aren’t open. And then they are left with no other option but to cancel their visit to the steel city,” he said.

On Sunday, a delegation of the association had met Jamshedpur East MLA Sarayu Roy, seeking his help in getting permission for reopening hotels and restaurants in the city. Earlier, the delegation had also approached East Singhbhum deputy commissioner Ravi Shankar Shukla and handed over a memorandum addressed to chief minister Hemant Soren.