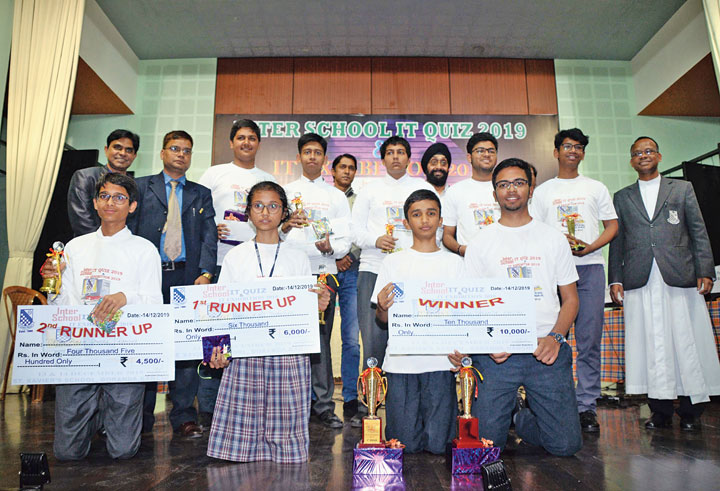 Do you know which eastern Indian city has a restaurant with two ingeniously developed robots, Champa and Chameli, as workers? Can you name the world’s first search engine? When was Microsoft founded?

If you are a tech buff, the answers are easy: Bhubaneswar, Archie and 1975.

Organised by St Xavier’s School at its hall, the IT quiz saw 55 three-member teams from 24 schools taking part, mostly from Ranchi.

After a preliminary written test, six teams qualified for the finals that had seven rounds conducted by quizmaster Santosh Kumar.

Of the seven schools, four were from Ranchi — DPS, Bishop Westcott Girls, Surendranath Centenary and St Xavier’s — as well as one each from Dhanbad and Bokaro, De Nobili and St Xavier’s, respectively.

Apart from questions, participants had to identify animated films, eminent IT personalities such as Steve Jobs and Sundar Pichai and others from pictures and voice clips.

The team from De Nobili, Dhanbad, with Latasha Nayak, Mudit Raj and Anirban Roy, were a distant second with 130 points and won Rs 6,000. Ishan Ranjan, Vaibhav Garodia and Pratyush of DPS, Ranchi, with 115 points, stood third and won Rs 4,500. All the three teams got trophies, too.

Asked how it felt to come second, Anirban of De Nobili said: “Good experience. We didn’t get much time to prepare, so were pleasantly surprised to get the second prize.”