She warned that the joint agitation by rights activists, social organisation and trade unions would intensify if Centre did not accede to their demand for a judicial probe 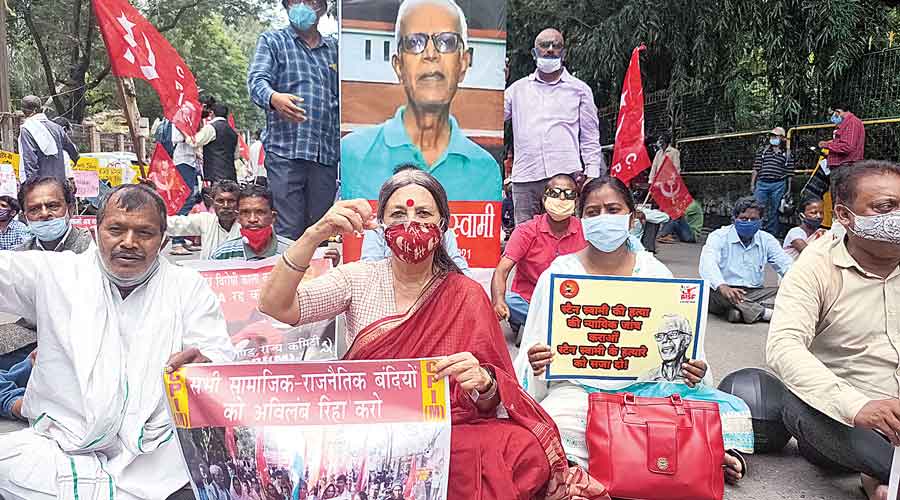 Brinda Karat and activists protest outside the Raj Bhavan in Ranchi on Thursday.
Manob Chowdhary
Animesh Bisoee   |   Jamshedpur   |   Published 16.07.21, 04:14 AM

“It is not NIA — National Investigation Agency — but NCA — national criminal agency — as it is responsible for the killing of Fr Stan Swamy. All of us know that not a single officer in the NIA moves without orders from (Union home minister) Amit Shah and it is clear who is behind the death of Fr Stan Swamy,” Brinda said during a march to the Raj Bhavan in Ranchi in the afternoon to protest the death of the octogenarian and ailing Jesuit priest and tribal rights activist while awaiting bail in judicial custody in Mumbai on July 5.

“We demand a judicial probe into the custodial killing of Fr Stan Swamy and the lodging of an FIR against those responsible,” the CPM leader added.

A former Rajya Sabha member from Bengal, Brinda accused the NIA of fabricating and implicating rights activists in false cases.

“The NIA is used to target rights activists, academics and writers who have raised voices of dissent against the Centre, and despite their fragile health they are lodged behind bars on fabricated charges and the NIA is constantly opposing their bail despite some of them being in jail for several months,” she said.

“The same thing happened with Fr Stan Swamy, too, and he was denied basic medical facilities despite repeated pleas in a NIA special court,” Brinda added.

She warned that the joint agitation by rights activists, social organisation and trade unions would intensify if the Centre did not accede to their demand for a judicial probe into the death of Fr Stan, an accused in the Elgaar Parishad-Maoist links case.

The Hemant Soren government should review the cases of poor tribals who are languishing in jails in Jharkhand for petty crimes and release them, Brinda said.

Fr Stan had fought to get such prisoners, accused of collecting fuel and fodder from forests, released. Brinda said many of these cases had not been heard for years.

“Releasing such undertrial prisoners will be like paying a genuine tribute to Fr Stan Swamy,” she said.

Fr Stan, who had been suffering from Parkinson’s disease, had been in Taloja Central Jail since October 9, 2020, after his arrest from his Bagaicha residence in Namkum near Ranchi on October 8 by the NIA. He was booked under the stringent Unlawful Activities (Prevention) Act (UAPA), which he had later challenged in court.

The memorandum calls for a judicial probe into the death of Fr Stan, punishment for those found responsible, grant of “martyr” status for him, recommending his name for the Bharat Ratna, immediate release of all rights activists, social workers and academics imprisoned on false charges under the UAPA and repeal of the “draconian” law.