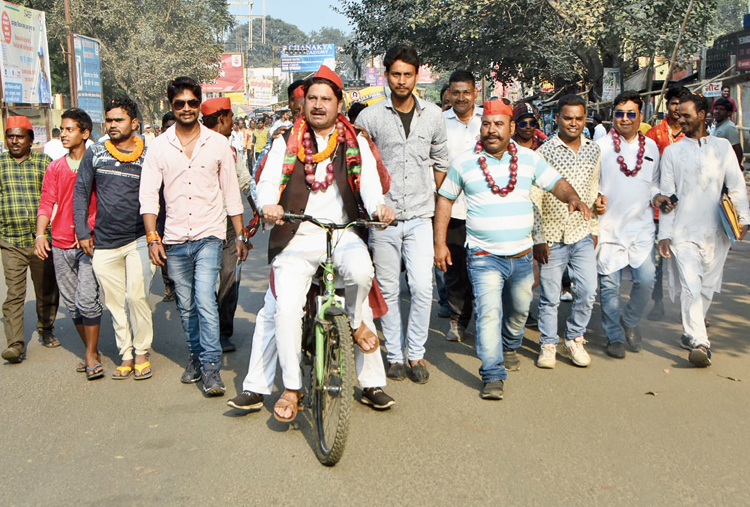 Samajwadi party candidate from Dhanbad, Meraz Khan, rides on a cycle (his party symbol) to file his nomination in Dhanbad on Friday, wearing party’s scarf, turban and a garland of onions
(Gautam Dey)
Our Correspondent   |   Daltonganj   |   Published 30.11.19, 07:19 AM

As many as 71 booths in Latehar and Palamau districts have been relocated to thwart any disruptive plan by Maoists during the first phase of polling on Saturday.

A press release issued by the Latehar district public relation office quotes Latehar district election officer-cum-deputy commissioner Zishan Qamar as saying that a total of 62 booths had been relocated in the two Assembly constituencies of Manika and Latehar.

Sources said the relocation of booths had been prompted by the lurking danger of IEDs (improvised explosive devices) planted by Maoists.

“The personnel of Central Armed Police Forces who have come here on poll duty have been made to understand the gravity of this IED threat and to follow in the standard operational protocols,” state nodal police officer-cum-additional director general of police Murari Lal Meena said.

Meena said the rebels used the topography and rough terrain of Latehar district to their advantage.

“The five Assembly seats in Palamau share their borders with Bihar from where the Maoists are desperate to sneak in,” Meena added.

Meena said besides Gumla, Bishunpura and Chatra, the security forces face a major challenge in Lohardaga that touches Latehar, which is surrounded by rebels.