Happiness of a nation depends on farmers’ peace and prosperity, says Ikeda in his award acceptance speech 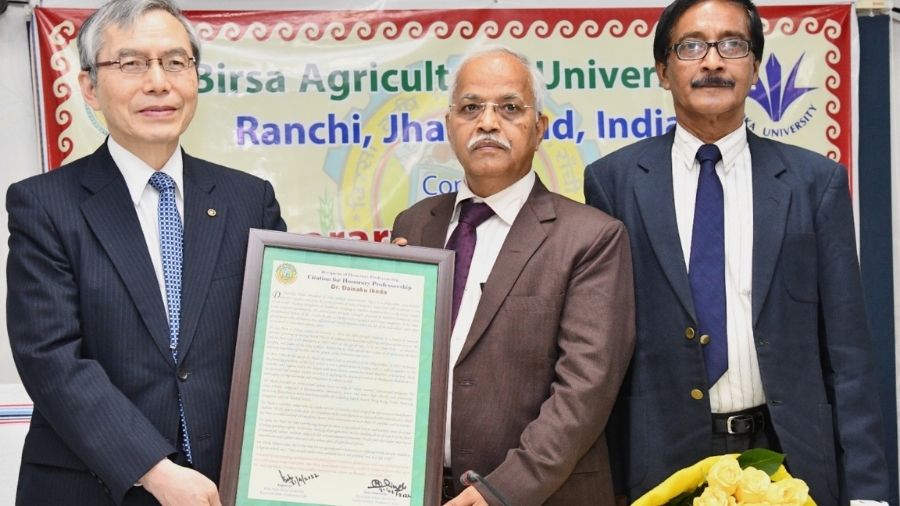 BAU VC hands over honorary professorship certificate to Japanese delegation in the absence of Ikeda, in Ranchi on Thursday.
Telegraph picture
Our Correspondent   |   Ranchi   |   Published 21.04.22, 07:43 PM

Birsa Agricultural University (BAU) on Thursday conferred honorary professorship on Daisaku Ikeda, one of the world’s leading interpreters of Buddhism, President of Soka Gakkai International (SGI) and founder of Soka University, Japan in recognition to his outstanding contribution in the field of green revolution, global peace and new global humanism.

Ikeda could not come personally to receive the honorary professorship due to his advanced age (94) and the citation was received jointly by Yoshihisa Baba, former president of Soka University, Akash Ouchi, SGI Director and Vinesh Gupta, Bharat Soka Gakkai (BSK) chairperson.

IKeda, in his award acceptance speech presented by Yoshihisa Baba, said, “Happiness of a nation depends on farmers’ peace and prosperity and it was very satisfying to note that challenges faced by farming community were well taken care of by BAU.”

BAU VC said, “Ikeda has repeatedly warned about the dangers of taking agriculture lightly and has advocated for taking it very seriously taking into consideration all aspects of future of the humankind, culture, tradition, respect for life and environment protection.”

BAU and Soka University had signed a MoU about a month ago for mutual cooperation in the field of teaching, research, publication and other academic activities. As per the MoU inked for next five years, both the universities can exchange faculty, staff, will jointly conduct research and consultancy, share information and publications and participate in other activities aimed at development of booth the institutions of higher learning. “The agreement will not create additional financial burden on the institutions,” said a BAU official.