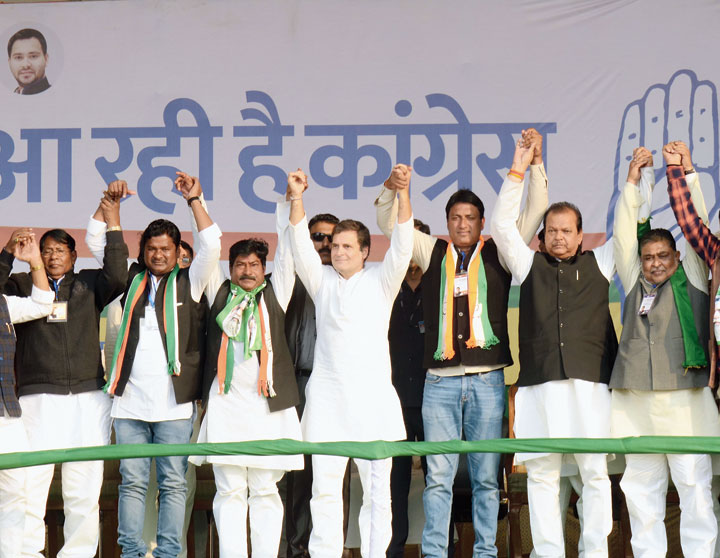 “Incidents of rapes are being reported every day… from Unnao… from different parts of the country while the BJP is giving the slogan of Beti Bachao Beti Padhao (save the daughter, educate her). I want to urge you to change the slogan and say beti ko BJP ke MLA se bachao (save the daughter from BJP MLA),” Rahul said, addressing an election rally of an estimated 8,000 people at the Mesra ground, around 20km from here.

Four-time BJP MLA from Bangarmau in Unnao, Kuldeep Singh Sengar, and his brother are accused in a gang-rape case.

Earlier in the day, addressing a rally of an estimated 50,000 people in Barkagaon, Rahul pointed out that Modi had not “uttered a single word” on the Unnao rape case in which “one of his MLAs” is an accused.

Rahul also accused the BJP of looting land from farmers and tribals to give it away to industrialists, and said the Indian economy was in a shambles and that the country was now known as the rape capital (See Page 9).

Rahul’s highlighting women’s safety has resonance in Ranchi; on November 26, a law student was gang-raped in Kanke, one of the five Assembly seats in Ranchi district that will vote on Thursday.

“Wherever he goes, he makes people fight in the name of caste, creed and religion and provokes one state against another; but he calls himself a desh bhakt (patriot),” Rahul said at Mesra.

His visit to Mesra came 35 years after the visit of his grandmother, Prime Minister Indira Gandhi, who had come to Mesra to participate in the Indian Science Congress at the Birla Institute of Technology there.

“The finance minister says she does not eat onion and garlic during discussion on onion price hike but she should know that people want a reply from her in the capacity of a finance minister. They want to know why the onion price is high and why unemployment is at its highest level in the last 45 years,” he said.

He said Prime Minister Modi pitches for votes for the BJP by talking about rooting out corruption, but does the opposite.

“The PM says ‘I am against corruption’ and when he comes asking for votes he puts the most corrupt Raghubar Das in front,” Rahul said.

Rahul, who was at the venue from 2.30pm to 3.20pm, promised Jharkhand what his party’s government in Chhatisgharh is giving people there.

“If our alliance wins the elections we will give all those facilities that our party’s government is giving in Chhattisgarh,” Rahul said in his 30-minute speech.

He said farmers would get Rs 2,500 per quintal for paddy and their loans will be waived.

He promised “proper protection” for the land of tribals, and 27 per cent reservation to Other Backward Classes (OBC), up from 14 per cent.