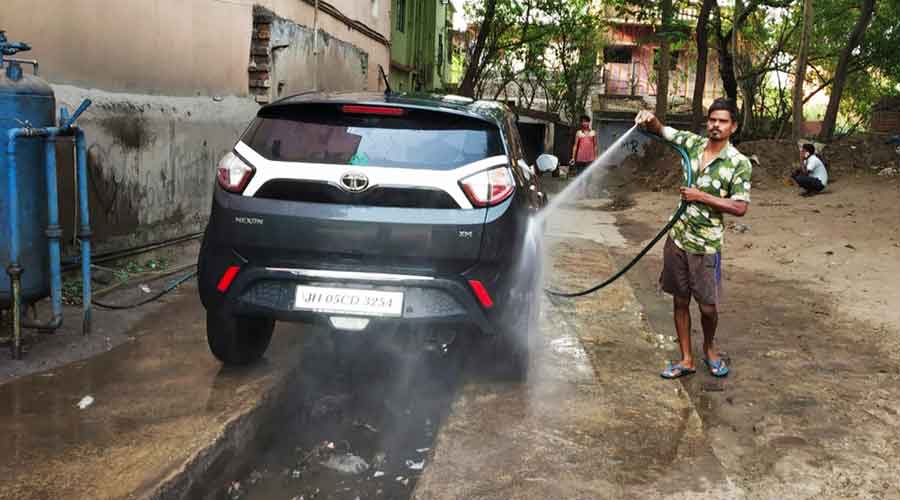 A local NGO of Adityapur in Seraikela-Kharsawan district has demanded the closure of car-wash centres amid acute drinking water crisis in the township.

According to Jan Kalyan Morcha’s recently conducted survey, while the majority of about three lakh residents were facing acute shortage of drinking water, the owners of car wash facilities are running their units by using drinking water.

"Be the water being raised from the deep-boring or supplied from the Drinking Water and & Sanitation Department (DW&SD), over a dozen car-washing units operating in Adityapur are being run with drinking water. Such units must be stopped with immediate effect," said Om Prakash, president of the JKM in a petition submitted to the Seraikela-Kharsawan deputy commissioner.

The JKM president told The Telegraph Online that those who wish to keep four-wheelers neat and clean may drive over to Sitarampur reservoir for getting their vehicles washed.

With the underground water table depleted considerably, most of the tube-wells have become defunct. As a result, the residents have started asking the AMC authority to supply drinking water through tankers. But due to absence of adequate number of water tankers the AMC is not being able to provide the residents with drinking water through tankers.

"We only have seven tankers which are not adequate to meet the demand of all the residents. We are planning to procure 15 more tankers on an emergency basis to cope up with the drinking water crisis," said Vinod Shrivastav, mayor, AMC to The Telegraph Online.

A mega drinking water project worth Rs 400 crore is being set up at Adityapur by the state government but due absence of forest clearance at a number of points, the ambitious project is making progress at a snail's pace and is not likely to be completed before March 2022.