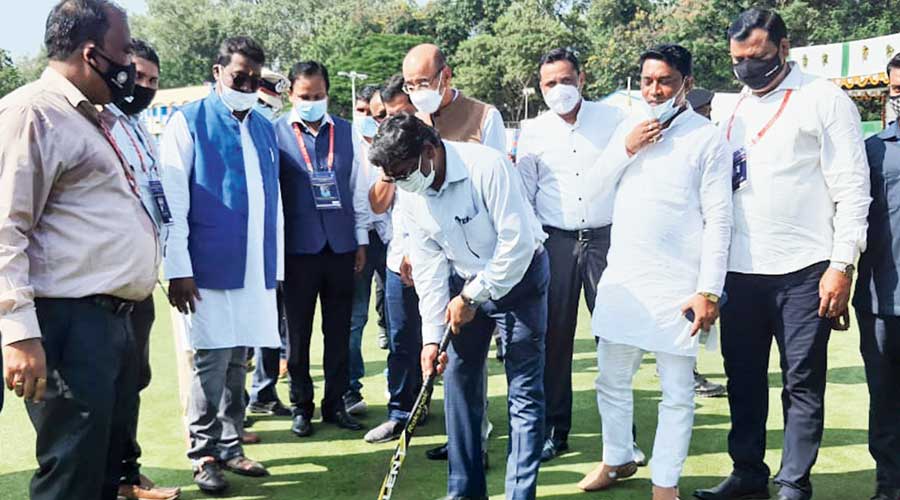 “It’s really a pleasure to be present at the opening of two national hockey championships at the same venue in less than a year, that too during the pandemic,” said chief minister Hemant Soren, referring to the sub-junior national tourney that was held at the same venue earlier this year.

“We sincerely want that Jharkhand is identified with sports the same way it is done with its minerals and natural beauty,” he further said after declaring the meet open.

For promoting hockey in Simdega that is known as the nursery for the sport, “foundation was laid for another stadium of international standard here today”, said the chief minister who did the honours a while ago.

Simdega is called the cradle of hockey as its children, despite facing poverty, pursued hockey sincerely and went on to play at national and international levels, including Olympics.

The girl players also impressed equally. Salima Tete of the district represented the country in the Tokyo Olympics recently while three other girls are attending a national camp in Bangalore at present.

“Over 500 players and officials from 26 states have assembled here for 10-day tourney that will conclude on October 29,” Hockey Jharkhand president Bholanath Singh informed when contacted in Simdega, adding “the matches were being telecast in 196 countries, courtesy World Hockey Federation”.

The teams from 26 participating states have been placed in 8 different pools. The best teams of each of those pools, to be decided after 6 days of pool matches, will then vie for the title in the knockout stage, beginning October 26.

“The national junior women’s team will also be selected during this championship,” informed Hockey Simdega president Manoj Konbegi, adding the tourney became more important for the players due to this reason.

Salima was first chosen for the national team when an edition of the same championship was organised in Ranchi in 2015 and she continued to represent the country even at the senior level and finally in the Olympics.

The opening day of the tourney witnessed four matches where goals were showered by winning teams.

The first match was played between the teams from Karnataka and Bengal when the latter conceded a defeat by 16-0. In the second, the Punjab team trounced the Puducherry team by 18-0 while Assam defeated Rajasthan by 5-0 in the third match.

In the fourth and the last match of the day, the team from Tamil Nadu lost to the hosts Jharkhand by 1- 8.

Tamil Nadu was, however, the only defeated team of the day that scored a solitary goal.