Advertisement
Home / India / You can put your head in sand like an ostrich, we will not, Delhi HC blasts Centre
'700MT oxygen has to be supplied to the national capital'

You can put your head in sand like an ostrich, we will not, Delhi HC blasts Centre 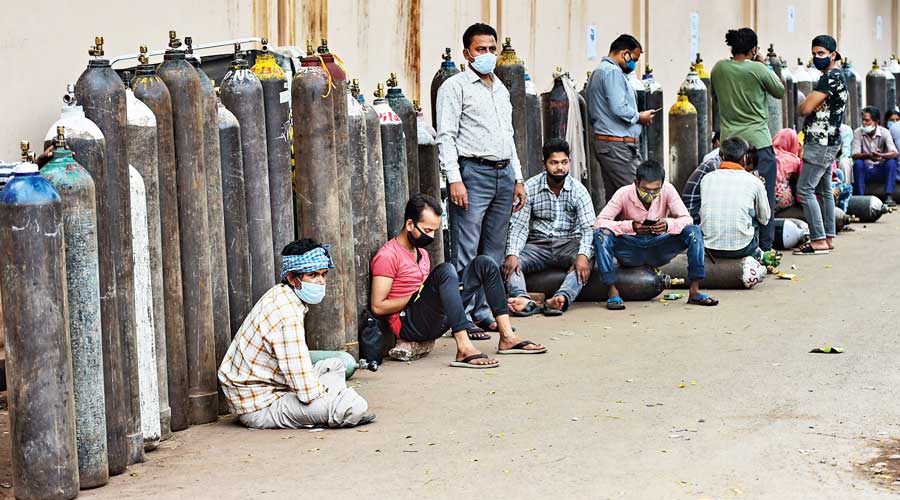 The Delhi HC rejected the Centre's submission that Delhi was not entitled to 700 metric tonnes of medical oxygen in light of existing medical infrastructure.
File picture
Our Bureau, Agencies   |   New Delhi   |   Published 04.05.21, 07:48 PM

The Centre's inability to supply adequate oxygen to Delhi came in for severe criticism on Tuesday with the Delhi High Court asking why contempt proceedings should not be initiated against it for failing to comply with its order on oxygen supply for the treatment of COVID-19 patients.

"You can put your head in the sand like an ostrich, we will not," the high court told the central government, adding that the Supreme Court had already directed _ and now the high court was also saying _  that the Centre would have to supply 700 MT oxygen daily to Delhi right away by whatever means.

"You are part of the city and seeing the situation yourself. No, you don't know. Are you living in ivory towers?" the bench said.

A bench of Justices Vipin Sanghi and Rekha Palli also rejected the Centre's submission that Delhi was not entitled to 700 metric tonnes of medical oxygen in light of existing medical infrastructure.

It said the Supreme Court's April 30 detailed order directed the central government to provide 700 MT of oxygen per day to Delhi and not just 490 MT.

"We had told you contempt is the last thing on our mind but it is certainly in our mind and don't drive us to that last point. We mean business now. Enough is enough. Be clear on this. We are not going to take no for an answer. There is no way you won't supply 700 MT.

"There is a Supreme Court order and now we are also saying that you will have to supply 700 MT oxygen daily to Delhi right away by whatever means. We would not hear anything except compliance," the bench observed.

The bench, which heard the matter related to the oxygen crisis and other COVID-19 related issues that Delhi was grappling with for five hours, said, "We see grim reality everyday of people not able to secure oxygen or ICU beds in hospitals which have reduced beds due to the gas shortage.

"We, therefore, direct the central government to show cause why contempt be not initiated for not only non-compliance of our earlier order as also of the order of the Supreme Court dated April 30. To answer the said notice, we direct the presence of Piyush Goyal and Sumita Dawra (senior Central government officers) tomorrow," it said.

On the submission of ASG Chetan Sharma that the compliance affidavit of April 30 order would be filed in the Supreme Court by tomorrow morning, the bench said, "We fail to understand what good a compliance affidavit will be done when as a matter of fact 700 MT of oxygen is not delivered to Delhi. Even the earlier allocated 490 MT and revised 590 MT is not being delivered even for a single day."

"It pains us that the aspect of supply of oxygen for treatment of COVID-19 patients in Delhi should be viewed in the way it has been done by the Centre," it said.

It added that on one hand there was a need to augment capacities to meet the rising numbers, while on the other hand, the existing infrastructure was crumbling and available beds could not be put to use.

After the court dictated its order, ASG Sharma said that he had taken down the order and it may be uploaded tomorrow morning only.
To this, the bench said, "No, we will upload it today itself."