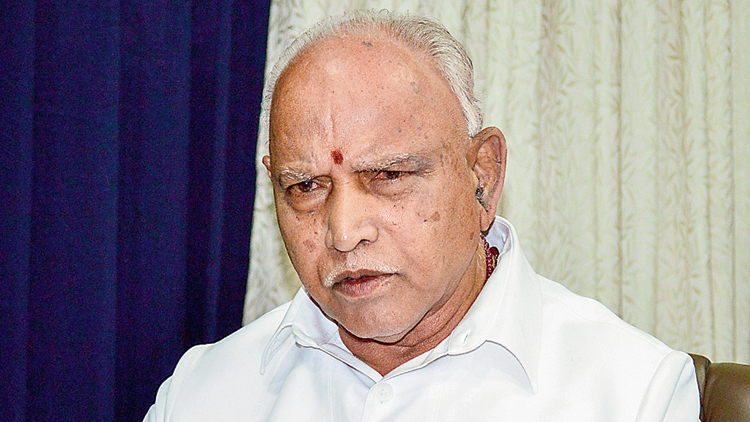 The BJP appears to be disowning the Congress and Janata Dal Secular rebels who had helped it return to power in July, indicating it might renege on its promise to field them in the December 5 by-elections to 15 Assembly seats.

Karnataka chief minister B.S. Yediyurappa dropped the hint in Hubli on Sunday, telling reporters: “The MLAs resigned on their own. We have nothing to do with the resignations.”

His remark came amid a controversy over a video in which the chief minister purportedly admits engineering the defections with the endorsement of party president Amit Shah, contradicting the BJP’s official stand that it had nothing to do with the rebellion.

In the video, Yediyurappa also purportedly predicts a favourable Supreme Court verdict on the 17 rebels’ plea against their disqualification from the Assembly and debarment from the by-elections, which the Congress has construed as interference and contempt.

The Congress on Monday applied to the apex court to take the video into account before passing the verdict on the former MLAs’ petition, which is expected this week.

On Saturday, the party had handed a letter on the same subject to the Karnataka governor to be forwarded to the President, and demanded the resignations of Yediyurappa and Shah, the Union home minister.

While Yediyurappa on Sunday did not explicitly say the Congress-JDS rebels would not get the by-election tickets, his comment had come in answer to a question about their possible poll candidature, which has sown discord within the party.

Hours later, his cabinet colleague Jagadish Shettar was more direct, telling reporters: “Of course, their (the rebels’) resignations, which owed to personal reasons, helped us return to power. But that does not mean we are responsible for their political future.”

After the 17 rebels — 14 from the Congress and 3 from the JDS — resigned, the then Assembly Speaker had disqualified them all, banning them from contesting any election during the existing Assembly’s term. This meant they could not contest the by-elections necessitated by their disqualification. The disqualified MLAs have challenged this in the apex court.

Yediyurappa had at several party meetings insisted that Shah wanted to field the rebels in all the 15 by-elections if the apex court ruled in their favour (the remaining two seats have been entangled in court cases since last year).

In the controversial video, he was purportedly reprimanding party leaders opposed to the defectors being nominated, stressing that the BJP had encouraged their rebellion and therefore owed them the poll tickets.

“When Yediyurappa says something, it’s part of a strategy. The leaked video clip has put us in a spot, but he knows how to come out of such situations,” he said.

He suggested the chief minister’s somersault may have been forced by “a lot of pressure inside and outside” --- an allusion to the Opposition calls for his exit and some party leaders’ disgruntlement at the favour shown to the defectors.

Yediyurappa’s comments, however, seem to have shocked the disqualified members who were eagerly waiting for the apex court verdict.

JDS rebel K. Gopaliah met the chief minister --- what they spoke about remains unknown --- while about 10 of the defectors met at the home of their leader, former Congress MLA Ramesh Jarkiholi.

A source close to Jarkiholi said they discussed Yediyurappa’s U-turn and planned to meet the chief minister.

Congress rebel K. Sudhakar, who did not attend the meeting, claimed he didn’t care what Yediyurappa said.

“I resigned as MLA in protest at the lack of funds and development projects for my constituency (Chikkaballapur), not to join the BJP,” he told this newspaper.

“I’m still a Congress worker,” he added, although the party has expelled him. Sudhakar has been publicly hobnobbing with BJP leaders since his resignation from the Assembly.

State Congress spokesperson V.S. Ugrappa said: “Yediyurappa is changing his stance since it’s been exposed how he and his national president adopted illegal means to lure the (rebel) MLAs. He can say what he wants; the people know (the truth).”