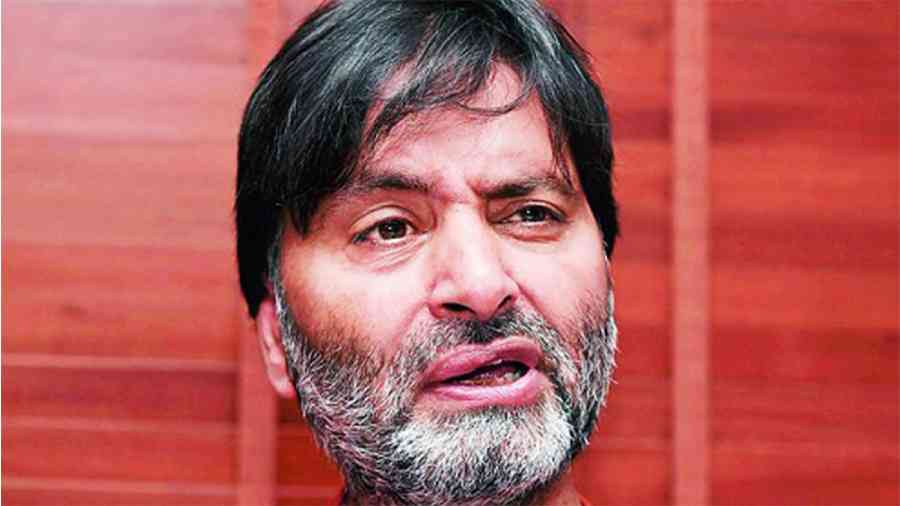 Yasin Malik, chairman of the banned Jammu and Kashmir Liberation Front (JKLF), was admitted to Delhi’s Ram Manohar Lohia hospital on Tuesday after his health deteriorated in Tihar jail where he is on a hunger strike, family sources said.

Malik has been on an indefinite hunger strike since Friday to protest the alleged denial of a fair trial to him.

“He was put on IV fluids three days back. His health, already fragile, has deteriorated,” a family member said.

Reports from Delhi said Malik was shifted to the hospital following a fluctuation in his blood pressure. Earlier, he was shifted to Tihar jail’s medical investigation room.

The JKLF chief is serving a life sentence in a terror-funding case. On May 25, an NIA court sentenced him to life for a case lodged in 2017 that was related to an agitation that broke out following the death of militant commander Burhan Wani.

Malik went on a hunger strike after the Centre refused to agree to his request to allow him to physically appear in the case in Jammu.

Malik, 56, faces trial in several other cases including the 1989 abduction of Rubayya Sayeed, daughter of then Union home minister Mufti Mohammad Sayeed.

The Delhi visit of Maharashtra chief minister Eknath Shinde, who was supposed to fly to the national capital on Wednesday night, has been cancelled, an official said.

The official didn’t attribute any reason for the sudden cancellation of Shinde’s visit.

The announcement of the CM’s visit to Delhi earlier in the day gave traction to speculation that the expansion of the new state cabinet, pending for almost a month, is imminent.

Earlier, the chief minister’s office had said Shinde will board a flight to Delhi at 7pm. He will reach Maharashtra Sadan at 9pm, it had said but didn’t disclose his engagements in the national capital nor the day when he is supposed to return to Maharashtra.