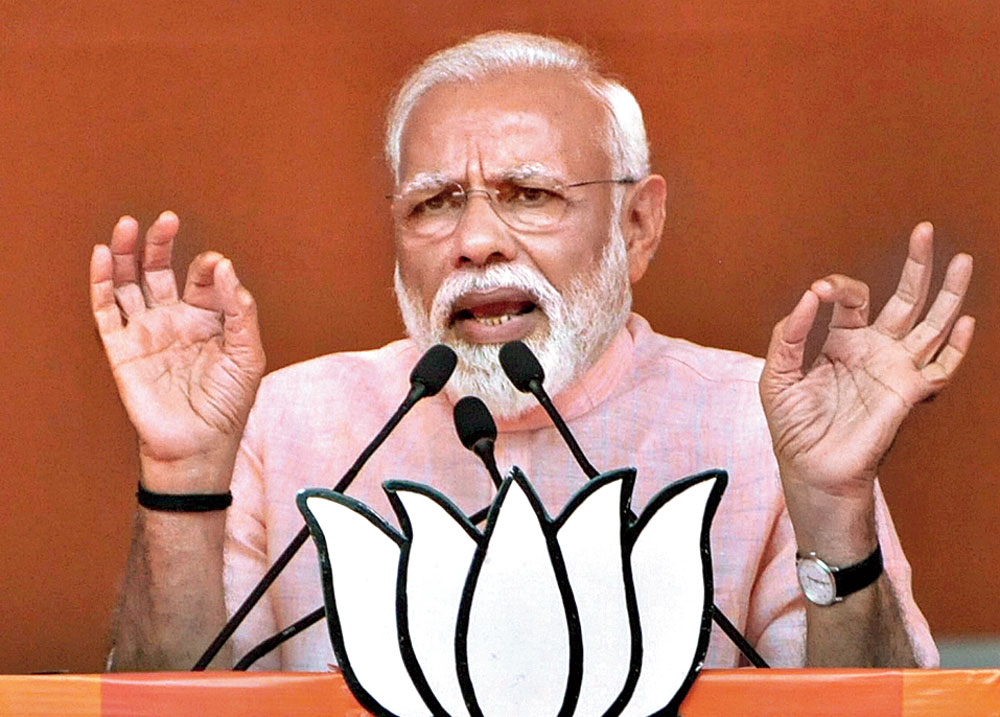 Prime Minister Narendra Modi on Friday claimed that the world was “cheering for India” and appeared to link it to the people’s decision to vote in a “stable government” in 2014.

Modi referred to the United Arab Emirates’ announcement on Thursday that it would confer its highest civilian decoration — the Order of Zayed — on him.

“Why do you think the UAE honoured me?” he asked the gathering. The crowd chanted: “Modi, Modi.”

Modi said he was bowing his head before the people who supported him over the past five years.

“You supported this chowkidar for five years and so I bow my head before you. I ensured that the country did not have to bow its head before anybody,” he added.

Modi told the gathering that the Congress “didn’t show respect” to Dalit leaders such as Babasaheb Bhimrao Ambedkar, Jogendra Nath Mandal and Jagjivan Ram, although it is widely believed that the BJP would not receive the support of the community in the general election in Uttar Pradesh.

“The Congress is trying to play Dalit politics. But they had defeated Babasaheb Bhimrao Ambedkar in an election (from Bombay North in 1952). The Congress also dumped Jogendra Nath Mandal when he returned from Pakistan. The Congress insulted Jagjivan Ram,” the Prime Minister said.

Mandal, a lawyer, had migrated to Pakistan after the Partition in 1947. He was the first law minister of Pakistan. He returned to India after a few years, but didn’t get any important position thereafter.

Jagjivan Ram, whose 111th birth anniversary was celebrated on Friday, was defence minister in the Congress government before quitting the party in 1977 and forming his own outfit and going on to become deputy Prime Minister.

Asked about Modi’s claim that the Congress was “anti-Dalit”, a senior BJP leader told The Telegraph that the BJP knew the Scheduled Castes wouldn’t support it in the polls.

“A section of non-Jatav Dalits had voted for us in the 2014 Lok Sabha and 2017 Assembly elections. But now they are unhappy with us because of the Saharanpur (caste) riots. Obviously, we cannot expect to get their votes in this election. It is a simple strategy in this situation to try to keep them from moving to the Congress. A division in Dalit votes will help us win,” the leader said, requesting anonymity.

Mayawati’s BSP, which is fighting the elections in alliance with the Samajwadi Party, have traditionally received the support of the Dalits.

Saharanpur had been rocked by clashes between Dalits and Rajputs in May 2017. Dalit leaders had blamed chief minister and BJP leader Yogi Adityanath, a Rajput, for the tensions.

Chandrashekhar Azad, a young Dalit leader in Saharanpur and chief of the Bhim Army, has declared that his community will defeat the BJP as well as the SP-BSP alliance. Priyanka Gandhi Vadra, the Congress general secretary in charge of eastern Uttar Pradesh, met Azad recently.

Addressing another rally in Saharanpur on Friday, Modi claimed that the BJP was the only party that was working for the welfare of Muslim women. He reminded the audience of his government’s efforts to outlaw instant triple talaq.

“My government tried to save Muslim women from triple talaq and make their lives safe, but the Congress and its allies do not want that. I want to tell Muslim daughters that the exploitation of Muslim women will continue in SP-BSP and Congress rule,” Modi said.