Advertisement
Home / India / Work is going on at fast pace to give new impetus to development of Jammu & Kashmir: PM

Work is going on at fast pace to give new impetus to development of Jammu & Kashmir: PM 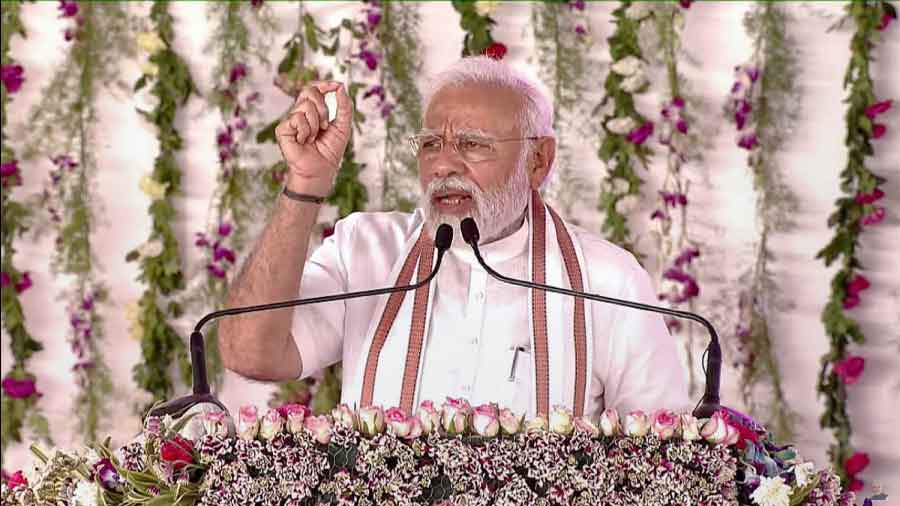 Prime Minister Narendra Modi on Sunday inaugurated and laid the foundation of multiple development projects worth over Rs 20,000 crore in Jammu and Kashmir, including the opening of the Banihal-Qazigund road tunnel to establish all-weather connectivity between the two regions of the union territory.

Modi, who celebrated the Panchayat Raj Diwas at Palli Gram Panchayat in Samba, said the youth of Jammu and Kashmir will get employment opportunities through overall development of the union territory. This is the prime minister's first visit to J-K after the abrogation of Article 370 on August 5, 2019. "The inauguration and laying of foundation of project of Rs 20,000 crores took place today. This will give new impetus to development of Jammu and Kashmir," Modi said in an address to the people here.

He said that it is a big day for speeding up the development of the region. "I congratulate the people of Jammu and Kashmir for this". "Rs 38,000 crores of private investment have been received in J&K in two years as compared to Rs 17,000 crores in last seven decades," the prime minister said.

The central laws, which would empower people here were not implemented over the years, have been implemented by the present government, he said. Prime Minister inaugurated the Banihal-Qazigund road tunnel to establish all-weather connectivity between the Jammu and Kashmir regions of the union territory.

The 8.45 Km long tunnel will reduce the road distance between Banihal and Qazigund by 16 Km and reduce the journey time by around one-and-a half-hours, officials said. The Prime Minister also laid the foundation stone of three road packages of the Delhi-Amritsar-Katra Expressway, being built at a cost of over Rs 7,500 crore, apart from launching 'Amrit Sarvor' initiative seeking to develop and rejuvenate 75 water bodies in every district of the country.

In order to further expand the network of 'Jan Aushadi Kendras' in Jammu and Kashmir, and to make good quality generic medicines available at affordable prices, 100 centres were inaugurated by the Prime Minister. These centres are located in remote corners of the union territory.

PM also handed over 'SVAMITVA' (survey of villages and mapping with improvised technology in village areas) cards to beneficiaries under the scheme. The cards will give villagers documentary proof of their ownership of properties so that they can use them for financial benefits if required.

He also digitally transferred prize money of Rs 44.70 crore to the bank accounts of 322 awardee Panchayats across 31 states/UTs in the country which are winners of awards given across different categories. The prize money ranged from Rs 5 lakh to Rs 50 lakh.

Palli: The nondescript hamlet of Palli in Jammu and Kashmir's border district of Samba on Sunday became the country's first 'carbon-neutral panchayat' with Prime Minister Narendra Modi dedicating to the nation a 500 kilowatt solar plant, installed in a record time of nearly three weeks.

The prime minister said that Palli has shown the way to the country by becoming carbon neutral. "With the inauguration of a 500 kW solar power plant at Palli, it is moving towards becoming the country's first panchayat to become carbon-neutral ...The people of Palli have demonstrated what 'Sabka prayas' can do," Modi said here. "People of Palli have helped in the project. They have also provided food to people engaged in the project," he said.

All 1,500 solar panels put up in a total area of 6,408 square metres will provide clean electricity to 340 houses in the model panchayat under the central government's Gram Urja Swaraj' programme, officials said.

"It is a red-letter day for us. With the blessings of Modi ji, the village has entered into the history of India as the first carbon-neutral solar village. We thank the prime minister for choosing this hamlet across the country," Palli villager Gurdeep Singh said.

From the macadamized roads to the recently launched electric bus service, the village located just 17 km from the winter capital Jammu is witnessing a major transformation with an upgraded Panchayat Ghar, renovated government high school building, a new pond and improved playfields and electric bus ride.

Palli's sarpanch Ravinder Sharma, who interacted with the prime minister, told him that village has Led bulbs, solar cookers and solar stoves.

Asked by the prime minister whether the village has solar pumps for irrigation of farmlands, Sharma said that 10 such pumps have been installed and 40 more will be installed in the next phase. Prime Minister asked the villagers to celebrate the birthday of their hamlet after fixing a date for it. "You should always celebrate the birthday of the village. All people who belong to this village and are living should be called back to participate in the celebrations," Modi said.

Sharma said that April 24 is the Palli village's formation day and they will celebrate its birthday. The prime minister suggested to villagers to go for organic farming which will be beneficial for them.

The solar project was completed at a cost of Rs 2.75 crore in a record time, officials said. The electricity generated will be distributed to the village, having a daily requirement of 2,000 units, through the local power grid station.

Jammu: Explosion ahead of PM's rally