When in Bengal, speak Bangla- Mamata Banerjee's remark on imposing Bengali in the state stirs debate

Twitterati from across spheres have laughed, cried, and become wary 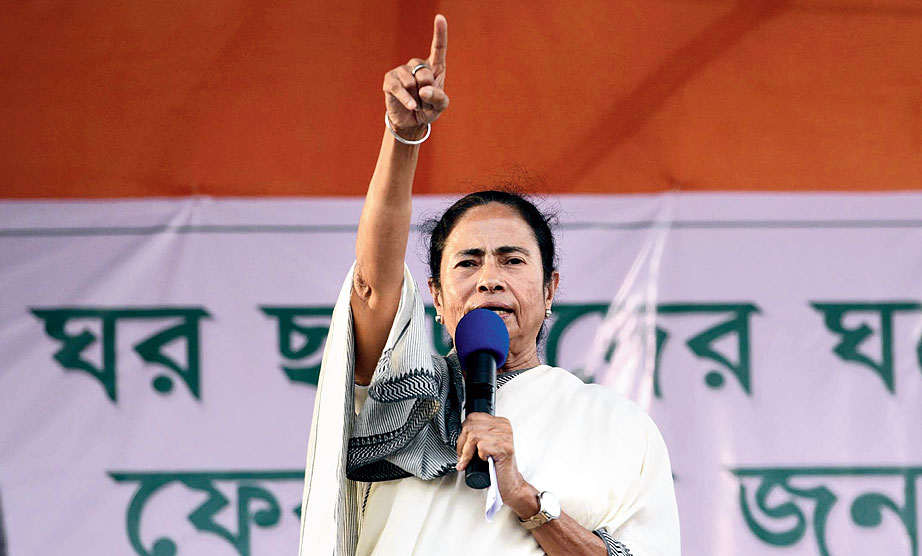 Netizens both within Bengal and across the country are worried about Banerjee's ultimatum to 'outsiders' when she said she would "never allow Bengalis to become homeless in Bengal".
(Gautam Bose)
Calcutta   |   Published 15.06.19, 01:33 PM

Chief Minster Mamata Banerjee said on Friday that those living in Bengal must learn to speak Bengali, intensifying her movement against the BJP which she accuses of trying to defame Bengal and its culture. The chief minister vowed not to allow the BJP to “corner” Bengalis and the minorities by importing its “Gujarat model”.

The topic is now trending on social media, an Twitterati from across spheres have laughed, cried, and become wary. Netizens both within Bengal and across the country are worried about Banerjee's ultimatum to 'outsiders' when she said she would 'never allow Bengalis to become homeless in Bengal'.

Bangalore-based author and historian Vikram Sampath reacted to Mamata Banerjee's ultimatum to 'outsiders', whom she asks to speak in Bengali if they wanted to stay in the state

Anshul Saxena, a Programmer known to have become a celebrity overnight after he launched a cyber attack on those who posted hate comments on the terrorist attacks in Pulwama, The ‘Hacker followed by PM Modi spoke about the chief minister’s Kachrapara speech on the imposition of Bengali.

Mamata called it Outsiders' hand; said speak only Bengali in Bengal. Though her 'insiders' Rohingyas in Bengal don't know Bengali

Others like actress Koena Mitra and author Shefali Vaidya condemned Banerjee's order, and expanded on the communal angle.

Koena Mitra took snippets from the speech and said that the chief minister’s ‘appeasement politics’ will ‘destroy’ her and her ‘Urdu speaking goons’.

"When I go to Bihar, UP, Pujnab, I speak in their language, if you are in Bengal you have to speak Bangla"~ Crazy Mamta Bano.
No one has to learn Urdu in WB, No one will !! Your appeasement politics will destroy you and your urdu speaking goons. #MamataBanerjee @MamataOfficial pic.twitter.com/58Rh17X3Jk

Yes, people, if you want to be in Bengal you must only talk in Bengali as fatwa-Ed by Begum @MamataOfficial, meanwhile SHE can use Urdu on her letterhead. pic.twitter.com/xnPK5Gkyfn

The Governor of Meghalaya, Tathagata Roy however took a jab at Banerjee and told her that his state has a large population of Bengali, Assamese, Hindi, and Nepali-speaking people who cannot speak the local languages Khasi and Garo, and that it was a matter of ‘great concern’ as governor.

A matter of great concern to me as Governor of Meghalaya: W Bengal CM Mamata Banerjee says those living in Bengal will have to learn to speak in Bengali. My state has a large Bengali,Assamese,Hindi and Nepali-speaking population who cannot speak Khasi or Garo. What about them?

Former UNESCO Chair of International Water Cooperation and professor of peace and conflict research at Uppsala University Ashok Swain said that the situation will be worrisome for the union government, as the Bengali language was rooted in the divide that made Bangladesh an independent country.

If a 'Bengali' movement takes momentum in West Bengal, Delhi will have a lot to worry about! That language had made Bangladesh an independent country in 1971. https://t.co/WE4LNo65YM via @timesofindia

Others like satirist Akash Banerjee, who is a host at the YouTube show TheDeshBhakt, a popular political and social satire platform, used his humour to lighten the mood.

Forget Hindi, Gurmukhi, Nepali, Urdu & Oriya that is spoken in Bengal - this move will come as big blow to Salt Lake Bongs - who speak Bengali with a heavy accent of English (if at all) 😛@MamataOfficial needs help - that is why #DoctorsStrike must end ASAP! https://t.co/nUd2LXwXYi