Ram temple will be an inspiration for humanity, says PM

Modi performs bhoomi pujan at Ayodhya, says wait for centuries is over 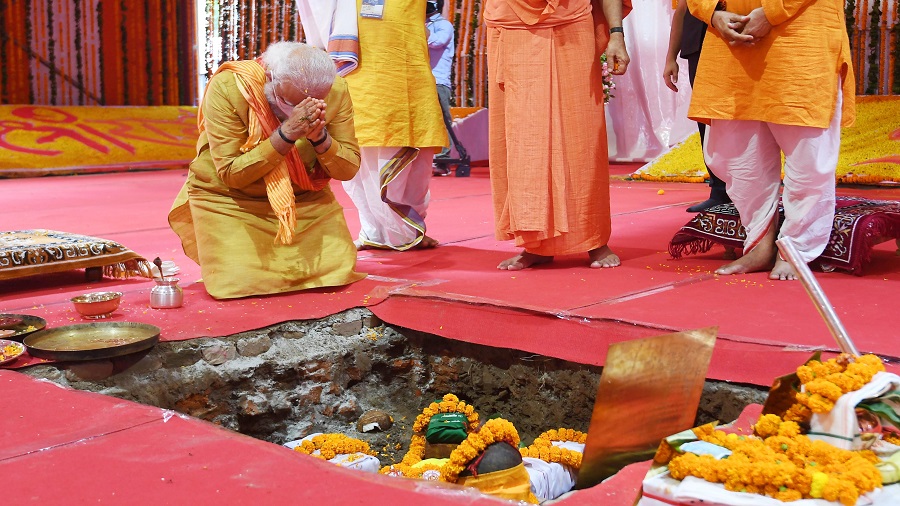 Prime Minister Narendra Modi launched the construction of the Ram temple in Ayodhya, 28 years after the demolition of Babri Masjid at the same spot, on Wednesday, saying that the wait of “centuries has ended”.

Beginning his speech with Jai Siya Ram, the Prime Minister told the gathering in Ayodhya that a grand temple would be built for Ram Lalla, the infant Ram, who had been living in a temporary tent for years.

“India is creating a golden chapter in Ayodhya,” he noted in his speech following the ground-breaking ceremony, the culmination of the BJP's mandir' movement that defined its politics for three decades.

“Many people made sacrifices for the Ram temple. I pay my respects to all of them,” the Prime Minister said after the ceremony at the spot where many devout Hindus believe Lord Ram was born.

Sending out the message that "Ram is everywhere, Ram belongs to all", Modi said the temple symbolises India's rich heritage and will be an inspiration for all of humanity.

Despite efforts to eradicate Lord Ram's existence, he “lives in our hearts and is the basis of our culture”, Modi said. "Social harmony was the core principle of Lord Ram's governance," the Prime Minister said.

Citing Lord Ram's message, Modi said the more powerful India gets, the more it will be loved and remain peaceful.

The PM said he believes the construction of the Ram temple is an instrument to unite the country, adding that it will lift the economy of the entire region.

"We have to join stones for construction of Ram temple with mutual love, brotherhood," he said, asserting that everyone's sentiments have to be taken care of.

Uttar Pradesh chief minister Yogi Adityanath praised the Prime Minister. He said Modi's foresight and wisdom paved the way for a peaceful resolution of the Ram temple issue and fulfilled the dream of Indians after 500 years of "long and hard" struggle.

Describing it as a very emotional and exciting day, Adityanath said this was not just the ground breaking ceremony of a temple, but an occasion to present before the world how Prime Minister Modi has taken India forward in six years to signify the idea of "Ram Rajya" where there is no discrimination on the basis of caste, region or language.

Earlier, the PM arrived in Ayodhya in a helicopter where Uttar Pradesh Chief Minister Yogi Adityanath, among others, received him. Before the main function to lay the foundation stone of the 'Shree Ram Janmabhoomi Mandir', the Prime Minister took part in prayers at the Hanumangarhi temple.

Ayodhya today: the latest pictures from Bhoomi puja of the Ram mandir