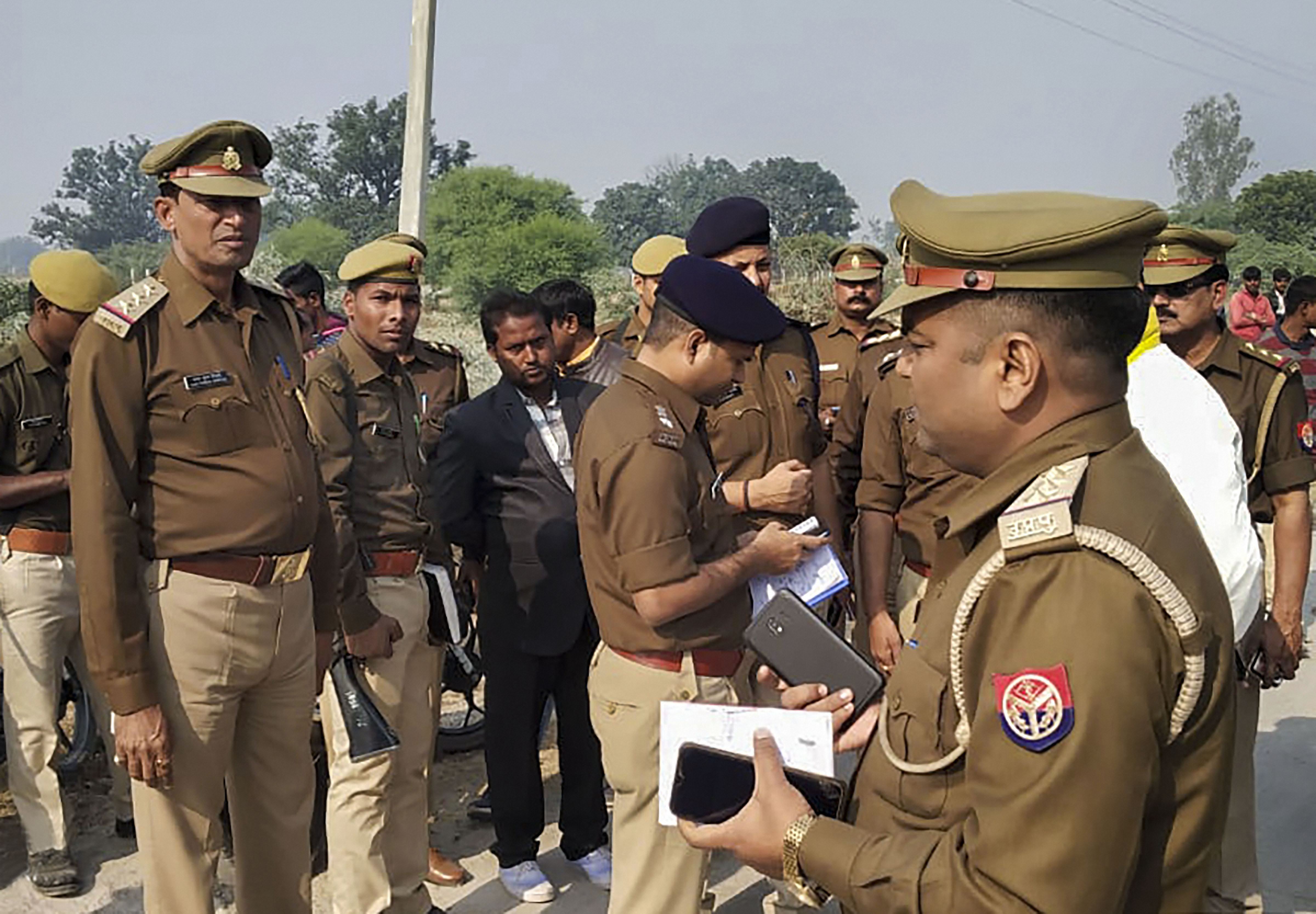 Police personnel investigate the site where the rape victim was allegedly set ablaze by five men at Sindupur village in Unnao district, Thursday, December 5, 2019.
PTI
The Telegraph And PTI   |   Lucknow   |   Published 07.12.19, 06:36 AM

A day after the Unnao rape victim, who was set ablaze by five men, succumbed to her injuries, Uttar Pradesh chief minister Yogi Adityanath on Saturday termed her death 'extremely sad' and announced that the case will tried in a fast track court.

'All the accused persons have been arrested. The case will be taken to a fast track court and punishment will be given,' he said in a statement issued in Lucknow.

The 23-year-old woman was airlifted to the Safdarjung Hospital in Delhi where she battled for her life for 40 hours before suffering a heart attack, sources at the hospital said.

Her body will be handed over to her family following an autopsy.

The woman's brother has demanded justice for her.

'She asked me that brother please save me. I am very sad that I could not save her,' he told reporters.

The victim's father said he wanted justice for her daughter in line with the Hyderabad case.

The four accused in the rape and murder of a Hyderabad veterinarian were killed in a encounter by the police, who claimed that the accused tried to flee.

Her father also said no MLAs had come forward to help them and that the police initially declined to lodge a complaint. After the case was lodged following a court's directive, one of the accused was granted bail. He was one of the five men now accused of setting the woman ablaze.

Mayawati said on Twitter that she is extremely saddened by the woman's demise and demanded that the UP government ensure 'proper justice'.

'UP government should take special initiative soon to provide proper justice to the victim's family. This is the demand of justice and people,' she tweeted.

'To prevent such traumatic incidents all over the country, including in UP, state governments should create fear of law among people and in view of the incidents, the Centre should also make a law to ensure strict punishment by hanging to death within a stipulated time-frame,' the BSP chief said in another tweet.

Priyanka Gandhi, who is en route to meet the family of the victim, blamed the Adityanath-led government for the woman's death and asked why was she not given security.

'Why the victim of Unnao gangrape case was not given security keeping in mind an earlier incident of Unnao? What action has been taken on the police official who refused to register an FIR? What steps are being taken by the government to stop crime against the women, which take place on a daily basis?' she wrote on Twitter.

Earlier, another victim from Unnao, who had accused former BJP MLA Kuldeep Sengar of rape, had met with an accident in July.

It is the failure of the society as a whole that the victim could not get justice, the Congress general secretary said, adding that the incident shows the hollow low and order mechanism of the state government.

'At the social level, we all are guilty, but at the same time, this also points out to the hollow law and order mechanism in UP,' she said in another tweet.

SP chief Akhilesh Yadav has begun a 'dharna' outside the Vidhan Bhavan in Lucknow over the death of the Unnao rape victim.

Accompanied by senior party leaders, Yadav squatted before the main entrance of the Vidhan Sabha to protest the Unnao incident.

'Sad. Cruelty has no limitations #Unnao,' the chief minister said in a tweet.

Delhi Commission for Women chief Swati Maliwal said that the accused be hanged within a month.

'I appeal to the UP government and the Centre to fast track this case and ensure that the perpetrators are hanged within a month,' said Maliwal.

She had recently begun an indefinite hunger strike on December 3 to demand that rapists are hanged within six months of their conviction.

Meanwhile, over the incident in Unnao, a woman poured inflammable liquid on her minor daughter outside Delhi's Safdarjung Hospital demanding justice for the victim, police said.

The woman was set afire by five men, including two of her alleged rapists, on Thursday morning when she was going to Rae Bareli to attend a court hearing in the rape case filed by her.

Her death comes on the same day when the four accused in the Hyderabad case will killed that had divided the nation over the encounter.

All the five men involved in the attack were arrested within hours of the crime.

In a tweet, the Uttar Pradesh police had said the victim lodged an FIR alleging that she had been raped between January 19 and December 12, 2018, by one of the accused on the pretext that he would marry her.

They had added that the probe into the incident is being conducted in a scientific manner and the circumstantial evidence being collected.

In a statement to sub divisional magistrate, the woman had said that she was attacked when she reached Gaura turn near her home.

She alleged that Shivam and Shubham Trivedi had abducted and raped her in December 2018. The FIR, however, was registered in March.

The sight of the woman running for help down an Unnao road sent shivers down the spines of local people. Ravindra, a local resident sitting by the roadside, said he called the police and the woman herself talked to them on phone.

Unnao has been in the spotlight after another young woman had accused former BJP MLA Kuldeep Sengar of raping her in 2017, when she was 17 years old.