Advertisement
Home / India / Unity of opposition parties will take shape on its own: Mamata

Unity of opposition parties will take shape on its own: Mamata

Banerjee, who is in the national capital for the first time after her party's victory in the assembly polls, met PM Modi and described it as part of protocol 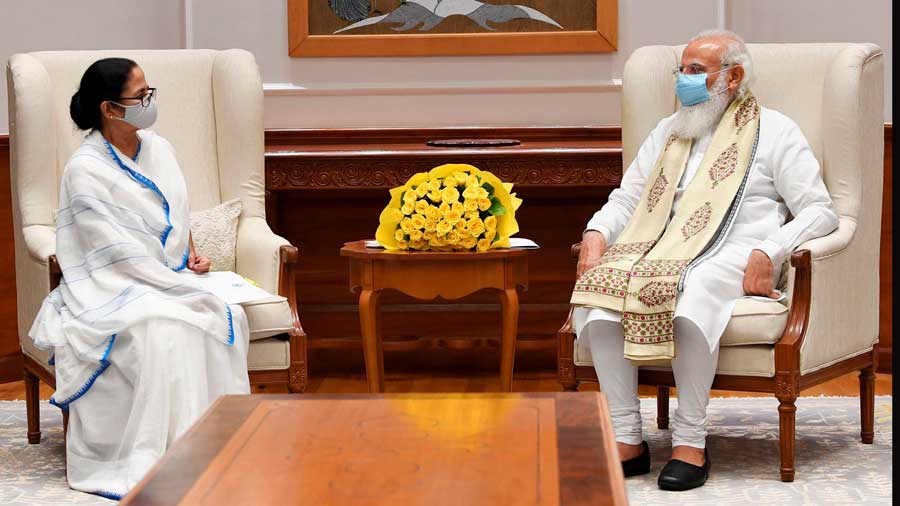 Trinamool Congress leader and West Bengal Chief Minister Mamata Banerjee on Tuesday said the unity of opposition parties will take shape on its own, sidestepping questions of her taking on the leadership role.

Banerjee, who is in the national capital for the first time after her party's resounding victory in the assembly polls, met Prime Minister Narendra Modi and described it as part of protocol.

"I had asked for an appointment from the PM... This was a courtesy visit. Post election, following the protocol we have to meet the PM once. But I also spoke about the Covid situation. I asked him to ensure that West Bengal gets enough vaccine doses. I am not against giving vaccines to other states, but considering the population of Bengal, we need more doses," she told reporters after the meeting.

She said during Prime Minister Narendra Modi's visit to Bengal in May, there was no scope for a one-to-one meeting.

Banerjee also said that she mentioned the issue of the change in West Bengal's name and told him that it was a long pending issue that should be resolved.

While Banerjee refused to say if she discussed the Pegasus project with Modi, said that the prime minister should convene an all-party meet on the snooping row and decide on a Supreme Court-led probe.

When asked if she has lined up a series of meetings with the Opposition parties with the 2024 Lok Sabha polls in mind, she said that the general elections are far away.

"However planning for it has to be done in advance. Like there is election in Uttar Pradesh, Punjab and Tripura. Like how happened in Tripura with our boys and the issue of Dainik Jagran," she said.

Asked about her efforts to unite the Opposition leaders, she said that it will happen "automatically".

She said that she will meet all Opposition members after the Parliament session is over and the coronavirus situation normalises, indicating that another visit soon was on the anvil.

This time around, however, she has her itinerary set with meetings with opposition party leaders who are seeking time from her and those like Congress Chairperson Sonia Gandhi who has invited her for tea.

"She has called me for a chai per charcha tomorrow. Many of these leaders are my old friends. We discuss about old and new times. I will meet Arvind Kejriwal day after tomorrow. Javed Akhtar and Shabana Azmi asked for time, I have given them time. I will meet my party MPs tomorrow. I met Congress leaders Kamal Nath, Anand Sharma and Abhishek Manu Singhvi today," she said.

A name missing from her list was that of NCP chief Sharad Pawar.

"I haven't spoken to Sharad Pawar. I will meet him after the monsoon session," she said.

She also said that she wants to meet the President but she has been informed that she needs to get a RT PCR test done, which, according to her, is difficult to do.