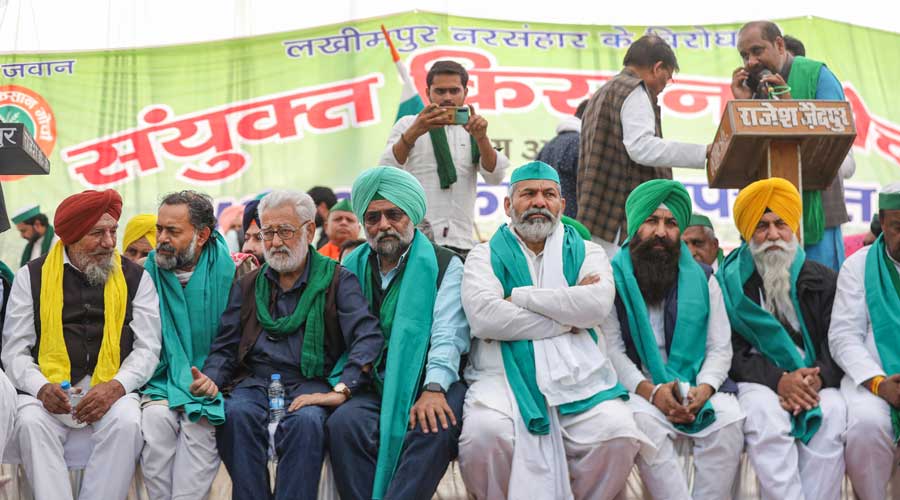 The Union home ministry on Tuesday sent a draft proposal in writing to the Samyukta Kisan Morcha (SKM), accepting most of the demands of the protesting farmers on compensation, MSP and police cases but subject to certain conditions.

Stating that this is the first time they have got a written assurance, the SKM, the collective leadership of the farmers’ movement, sought some clarifications and also made it clear that there was no question of calling off the agitation without the withdrawal of all the cases registered against protesting peasants and their supporters.

The SKM leadership will meet on Wednesday afternoon for further discussions. “The Morcha hopes for a positive response from the government,” it said in a statement.

On their key demand regarding a law guaranteeing minimum support prices for all farm produce, the government has pointed to Prime Minister Narendra Modi’s announcement of a committee. It is, however, still not clear whether the panel will discuss the enactment of a law.

The government has said the committee will include members of the Centre, state governments, representatives of farmers’ organisations and agriculture experts.

The SKM’s apprehension is that the government will try to pack the committee with farmers who support the now-repealed farm laws and are against MSP.

“It is the SKM that spearheaded this agitation across the country, so only our union leaders should be included in this committee. We should be allowed to decide the farmer representatives on this committee,” Dharmendra Malik of the Bharatiya Kisan Union (Tikait) told The Telegraph.

According to Ashok Dhawle, president of the All India Kisan Sabha that is another key constituent of the SKM, the rider on the withdrawal of cases is unacceptable as farmers have learnt the hard way that this will not be followed through once they end their agitation. The official proposal says that the governments of Uttar Pradesh and Haryana have said the cases will be withdrawn once the protest ends.

The two state governments have consented in principle to provide compensation to the farmers who died during the yearlong protest, but have not fixed any amount. The SKM, which says close to 700 farmers have died, wants an assurance from the government that the Punjab model will be followed.
Congress-ruled Punjab has fixed Rs 5 lakh as compensation for the next of kin of each deceased farmer and a job to a family member. “This has been working well in Punjab.

And the bulk of the cases are from Punjab. Uttar Pradesh and Haryana will have to shell out much less in (cumulative) comparison,’’ Dhawale said.

As for the Electricity Bill, the government has said consultations will be held with all stakeholders. “The government had actually assured us during negotiations that this will be withdrawn but still they brought it to Parliament. So, this is actually a step back,” Dhawale said.

Samajwadi Party MP Jaya Bachchan arrives to support the 12 suspended Rajya Sabha members who are squatting near Mahatma Gandhi’s statue in the Parliament complex to press for the revocation of their suspension.
PTI Picture

The Modi government continues to remain silent on the SKM’s demand for dismissal of junior home minister Ajay Mishra Teni. Asked about this, SKM leaders indicated that the government was unwilling to discuss the matter with them.

A car belonging to Teni had mowed down four farmers and a journalist in Lakhimpur Kheri on October 3 and his son, Ashis, is in jail in connection with the massacre.

The draft proposal on the demands was sent in writing after a conversation on Tuesday morning between senior SKM leader Balbir Singh Rajewal and Union home minister Amit Shah.

Tuesday’s conversation and proposal came shortly before a scheduled SKM leaders’ meeting at the Singhu border protest site.
The SKM had on Saturday set up a five-member committee to negotiate with the government and given the Centre time till Tuesday to respond.