No report of hostage situation related to Indian students in Kharkiv, clarifies govt 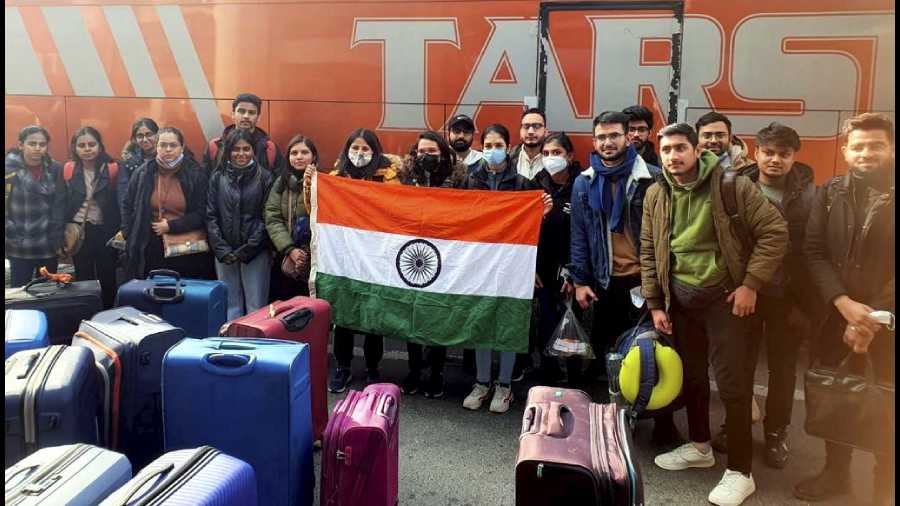 India had asked Russia to facilitate the safe passage of Indians from various conflict zones after the killing of an Indian student in shelling in Kharkiv on Tuesday.
File picture
Our Bureau, PTI   |   New Delhi   |   Published 03.03.22, 10:25 AM

India on Thursday said it has not received any report of a hostage situation involving Indian students in Kharkiv and that it has requested the support of Ukraine in arranging special trains for taking them out from the city and neighbouring areas.

India's comments came hours after Russia claimed that some Indian students were "actually taken hostage" by Ukrainian security forces, who use them as a "human shield" and in every possible way prevent them from leaving for Russian territory.

Separately, the Ukrainian foreign ministry "urgently called on the governments of India, Pakistan, China and other counties whose students have become hostages of the Russian armed aggression in Kharkiv and Sumy, to demand from Moscow that it allows the opening of a humanitarian corridor to other Ukrainian cities."

Some Indian students were stuck in the besieged eastern Ukrainian city of Kharkiv and several other conflict zones and India has asked both Russia and Ukraine to facilitate their safe passage to the border transit points for their exit to neighbouring countries.

"Our Embassy in Ukraine is in continuous touch with Indian nationals in Ukraine. We note that with the cooperation of the Ukrainian authorities, many students have left Kharkiv yesterday," External Affairs Ministry Spokesperson Arindam Bagchi said.

"We have not received any report of any hostage situation regarding any student. We have requested the support of the Ukrainian authorities in arranging special trains for taking out students from Kharkiv and neighbouring areas to the western part of the country," he said.

Prime Minister Narendra Modi on Wednesday spoke to Russian President Vladimir Putin and discussed the safe evacuation of the Indian nationals from the conflict areas in Ukraine including Kharkiv.

"The leaders reviewed the situation in Ukraine, especially in the city of Kharkiv where many Indian students are stuck.They discussed the safe evacuation of the Indian nationals from the conflict areas," the Indian statement of the conversation said.

The Russian readout said the Russian side is trying to organise an "urgent evacuation of a group of Indian students from Kharkov (Kharkiv) through the humanitarian corridor along the shortest route to Russia."

"At the same time, according to the latest information, these students are actually taken hostage by Ukrainian security forces, who use them as a human shield and in every possible way prevent them from leaving for Russian territory," it claimed.

It said the "responsibility, in this case, lies entirely with Kyiv authorities."

The Russian readout said Putin stressed that all the necessary instructions were given and that the Russian military was doing everything possible to ensure the "safe evacuation of Indian citizens from the war zone and their return to their homeland".

It also said the leaders agreed to continue close cooperation in order to ensure the safety of Indian citizens in Ukraine.

Responding to media queries on Indian students, Bagchi on Thursday said India has been coordinating effectively with the countries in the region including Russia, Romania, Poland, Hungary, Slovakia and Moldova for evacuation of Indians from Ukraine.

"A large number of Indian nationals have been evacuated from Ukraine in the last few days," he said.

"We appreciate the help extended by the Ukrainian authorities to make this possible. We thank Ukraine's western neighbours in receiving Indian nationals and for accommodating them while they waited for flights to take them back home," he added.