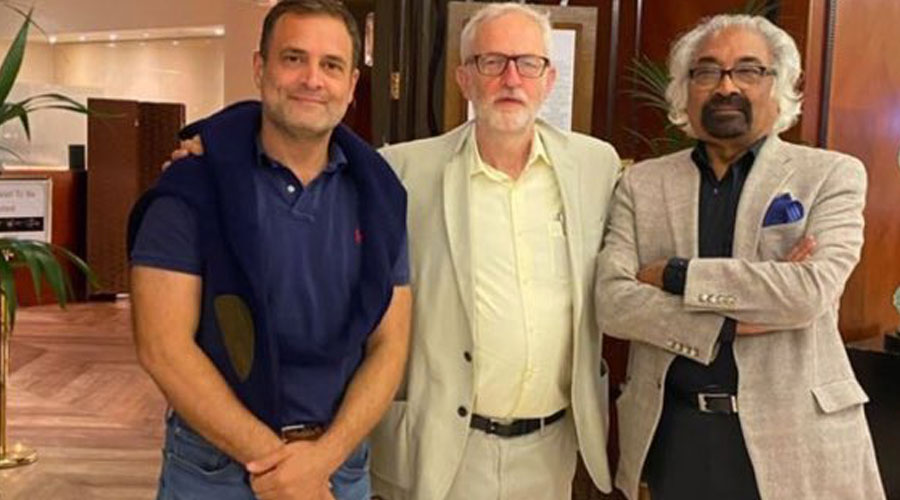 Former Congress president Rahul Gandhi's meeting with British Labour leader Jeremy Corbyn in London triggered a row back home with the BJP asking him whether he endorsed the UK opposition leader's "anti-India" views.

The Congress justified Gandhi's meeting and shared pictures of Corbyn with Prime Minister Narendra Modi to ask whether he too endorsed the "anti-India" views of the UK Labour leader and MP.

Gandhi, who is on a visit to London, met Corbyn on Monday and the Indian Overseas Congress shared the picture of the two along with Sam Pitroda.

Corbyn, who served as Leader of the Labour Party and Leader of the Opposition from 2015 to 2020, has often expressed his views against India.

BJP leader and Law Minister Kiren Rijiju shared a picture of Gandhi's meeting with the British leader on Twitter and attacked the former Congress chief, saying for how long can one go on against one's own country.

"Again.. Rahul Gandhi meets UK MP and Labour leader Jeremy Corbyn who is known for his hatred and dislike for India, advocates Kashmir's secession. Or how long and how much one can go on against one's own country," Rijiju asked in a tweet.

For how long and how much one can go on against one's own country? pic.twitter.com/74KgaeZKBB

What is Rahul Gandhi doing with Jeremy Corbyn (guy in the middle ) in London ?

Hitting back, Congress chief spokesperson Randeep Surjewala said, "Am amazed as to how dearest friends in TV Media have to bend over backwards to serve the idiotic agenda of Government and ilk of Kapil Mishra."

He said political leaders have met in the past and will meet in future other leaders having divergent and opposite views.

"Hope the media friends will ask the BJP as to what did PM discuss in this meeting and whether PM endorsed those views," he said.

Surjewala also shared a picture of Corbyn with PM Modi and asked, "Finally, May I also ask our Media Friends to identify the two men in picture below and ask the same questions? Does it mean PM has endorsed Jeremy Corbyn's views on India?"

He also cited examples of PM Modi's public interactions with economic fugitives Nirav Modi and Mehul Choksi and asked whether he endorsed them.

"Rahul Gandhi taking a picture with a person with whom we hold divergent views is neither a crime nor an act of terror as is being made out. If this is the criteria, our media friends should also debate - Why did PM take Nirav Modi to Davos and about their common photos? What about video of PM addressing Mehul Choksi as Hamare Mehul Bhai in a public function," he asked.

"Why does PM meet President Xi Jinping, when China has occupied our territory? Why did PM go to Pakistan to meet the then PM, Nawaz Sharif? Will the Government promise it'll never ever meet anyone having divergent views from us? Time to debate real issues, not BJP propaganda," the Congress leader said.