There is 'systematic attack' on institutions that allow India to speak, alleges Rahul Gandhi

During an event at Corpus Christi College, Cambridge University, Congress leader spoke on broad range of subjects from Hindu nationalism, Gandhi family's role and others 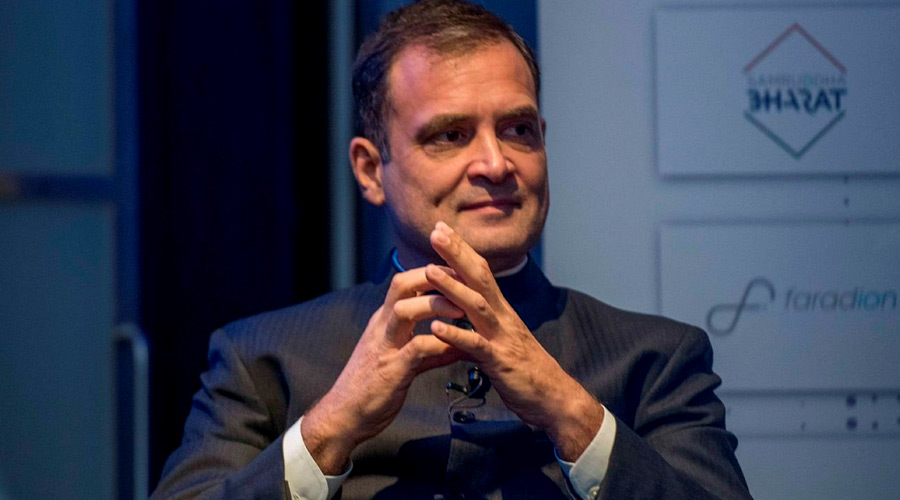 Congress leader Rahul Gandhi has alleged that there is a "systematic attack" on the institutions that allow India to speak and as the conversation is being stamped out, the "deep state" is entering those spaces and redefining the way that conversation is happening in the country.

During an event entitled India at 75' at Corpus Christi College at the prestigious Cambridge University on Monday evening, Gandhi spoke on a broad range of subjects from Hindu nationalism, the Gandhi family's role within the Congress party and efforts to mobilise the people of the country as he fielded questions from a largely Indian student base.

In conversation with Indian-origin academic from the university Dr Shruti Kapila, Gandhi reiterated some of the points he made during last week's conference, including the impact of the "deep state" on Indian politics.

"For us, India comes alive when India speaks and India dies when India goes silent. What I see as going on is a systematic attack on the institutions that allow India to speak Parliament, election system, the basic structure of democracy is being captured by one organisation. And, as the conversation is being stamped out, the deep state is entering those spaces and redefining the way that conversation is happening," he said.

Outside the lecture theatre, a small group of students had gathered with placards which read: "Rahul Gandhi keep your promise on mining" with reference to the adivasis in Chhattisgarh, an issue he said he was working on within the party.

He went head-to-head with students on several other topics, including his view of India as a union of states as opposed to a nation, which he insisted was a beautiful idea that gives the people of each and every state their rightful place.

"I think this goes to the heart of Indians," the former Congress party chief said.

During the interactive session, Gandhi also said that Prime Minister Narendra Modi is creating a vision of India that is not inclusive of all parts of the country's population, which is unfair and goes against the idea of India.

The Congress leader asserted that his party's fight was against a massive concentration of wealth and a capture of institutions within the country, including its media.

"You will not see this talk for more than 30 seconds anywhere in the Indian media. The reason is the Indian media is captured. It is controlled by a couple of large industrialists who support the government. So, we are not fighting a political party. We're fighting a capture of the Indian state and it's not easy it will take time, it is going to have a life, it is going to be difficult but we're doing it, said Gandhi.

Asked about how the Congress plans to fight against the forces of Hindu nationalism , Gandhi declared that he did not agree with the term itself.

"There is nothing Hindu about it and actually there's nothing nationalist about it. I think you'll have to think of a new name for them but they're certainly not Hindu. And, I have studied Hinduism in enough detail to tell you that there's absolutely nothing Hindu about wanting to murder people and beat people up, he said.

"My problem with the RSS and the Prime Minister is that they are fiddling with the foundational structure of India. When you play the politics of polarisation, when you isolate and demonise 200 million people, you're doing something extremely dangerous and you're doing something that is fundamentally against the idea of India, he said.

"I'm sure there are good things the Prime Minister has done, but for me attacking the idea of India is unacceptable, he added.

The BJP on Saturday had accused Gandhi of harming India in his comments against Prime Minister Modi and alleged his frequent critical remarks about the country from foreign soils amounted to betraying it.

In New Delhi, BJP spokesperson Gaurav Bhatia reacted sharply to Gandhi for his remarks at a conference in London organised by non-profit think-tank Bridge India on Friday.

Gandhi said his party is working on plans to go to the ground with padyatras, meet people and walk with people as a way to actively mobilise people from October-November after the Congress presidential elections in August.

"That's for the Congress party to decide. There's a presidential election, the party has to decide, he said, when asked if the party needs a leadership outside of the Gandhi family.

The event, organised by the School of the Humanities and Social Science at Corpus Christi College, Cambridge University, as part of a series of events celebrating the 75th year of Indian independence, marks the conclusion of Gandhi's UK tour which began last week.