The former CM says the NIA is being unleashed on farmer unions, the way it was done in the Valley 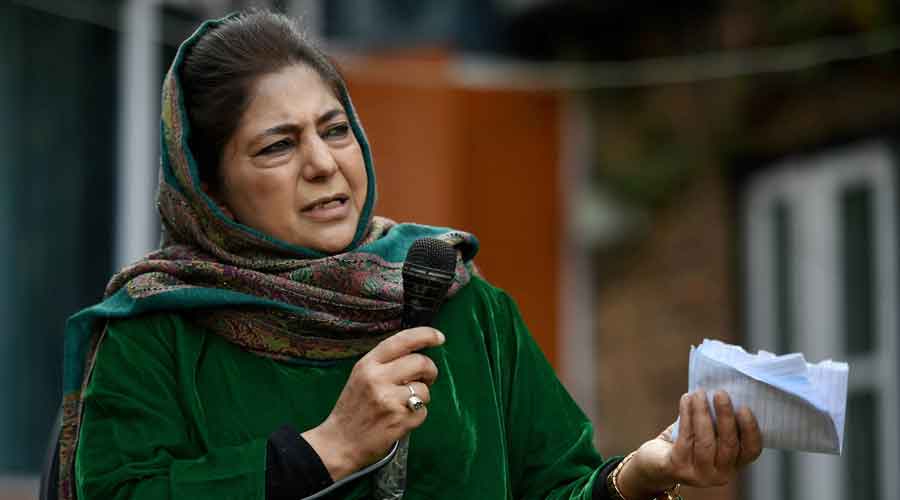 Former chief minister Mehbooba Mufti on Friday accused the Narendra Modi government of exporting the Kashmir-specific template of “terrorising” people into “silence” to other parts of the country, holding up as examples the steps taken to quell the farmers’ protest and the anti-Citizenship Amendment Act movement earlier.

Drawing attention to Delhi’s iron-fist policy while dealing with dissent in Kashmir, the People’s Democratic Party chief tweeted: “GOI’s template of terrorising Kashmiris into silence by using draconian laws & othering them is being extended to other parts of the country.”

“Be it CAA or farmer law protests, both were termed anti-national & anti-terror laws like UAPA (were) invoked to quell these peaceful movements,” she added.

Police have filed over two dozen cases against farmer leaders, journalists, politicians and activists for allegedly inciting violence on Republic Day. Several others are facing summons from the premier investigating agencies.

Successive governments have often been accused of using brute force to deal with separatists and pro-azadi protesters, but the Modi dispensation has gone one step further and attempted to crush the Valley’s pro-India camp too. Three former chief ministers — Mehbooba, Farooq Abdullah and Omar Abdullah — were among thousands who were jailed in 2019 to prevent protests against the abrogation of Jammu and Kashmir’s special status.

Delhi had unleashed the National Investigation Agency, the Enforcement Directorate and other agencies in the Valley to carry out daily raids to deny these leaders any breather. Similar tactics have also been used on those supporting the farmers’ movements, its leaders have alleged.

In November, the NIA arrested key Mehbooba aide Waheed-ur-Rahman Parra and booked him in a terror case. He was granted bail early this month only to be arrested again by Jammu and Kashmir’s counter-insurgency wing.

Mehbooba alleges that Waheed’s persecution by the Centre is emblematic of the situation that “Kashmiri politicians find themselves in today”.

“Disliked and mistrusted by the people in Jammu and Kashmir for their faith in the Indian Constitution on one hand and punished by the Centre for not toeing their line on the other,” Mehbooba recently said of these leaders.

The former chief minister has fiercely supported the farmers in their fight against the new farm laws and has sought their repeal. Mehbooba says the NIA is being unleashed on farmer unions, the way it was done in the Valley.

“The rot that has set into India’s premier terror investigative agency can be gauged from the manner in which they are fabricating charges on Kashmiris, farmers and those who dare to dissent,” she said recently.

Referring to the chaos in Delhi on Republic Day, Mehbooba alleged that it was orchestrated to defame the farmers. Without naming actor Deep Sidhu, accused by several farmer leaders of inciting violence, Mehbooba said he was a BJP aide.

“We saw on TV what happened on Republic Day. The man who did it is an aide of the BJP. He has been with the Prime Minister, the home minister and campaigned for the BJP during Sunny Deol’s election,” Mehbooba told reporters in Jammu.

She said the farm laws were against the fundamental rights and the bills were passed without consulting the farmers.