A two-year-old boy died allegedly after inhaling tear gas during a demolition drive at a Delhi slum inhabited by performing artistes. 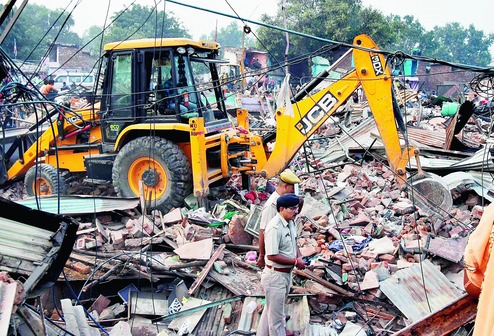 New Delhi: A two-year-old boy died allegedly after inhaling tear gas during a demolition drive at a Delhi slum inhabited by performing artistes.

Aryan, a resident of Kathputli Colony, whose demolition Delhi High Court stayed on Tuesday, had fallen ill after inhaling the gas, fired by police during Monday's eviction, which was opposed by residents backed by politicians and NGOs.

"Aryan, whose parents are street artistes in Haryana, had been hospitalised last week because of cough and cold. He was recovering after being discharged, according to his parents," said Amit Kumar of the NGO National Alliance of People's Movement.

In response to a public interest litigation by the NGO Centre for Holistic Development and residents, the high court on Tuesday directed the police to maintain "status quo" at Kathputli Colony, where 300 of 4,000-odd hutments have survived the eviction drive.

The court also ordered the Delhi Development Authority (DDA), which is carrying out the demolition, not to evict those whose houses have been demolished, even if they have been found ineligible for rehabilitation. Those allegedly ineligible for relocation have time till November 16, the next date of hearing, to appeal against the eviction along with proof.

Annie Raja and Philomina John of the CPI-backed National Federation of Indian Women are in hospital after they were allegedly dragged away by the police and DDA staff. John, 78, has suffered a leg fracture.

Kathputli Colony, a slum of performing artistes, puppeteers and magicians, is being demolished for a real estate project.

"Housing and urban affairs minister Hardeep Puri had assured us that no forcible demolition would take place. Till 4.15pm yesterday, he kept telling us over phone that he had given orders to stop the demolition," CPI national secretary Atul Anjan said.

At a news conference on Tuesday, Geeta Devi, whose house was demolished, said three of her nine children were missing.