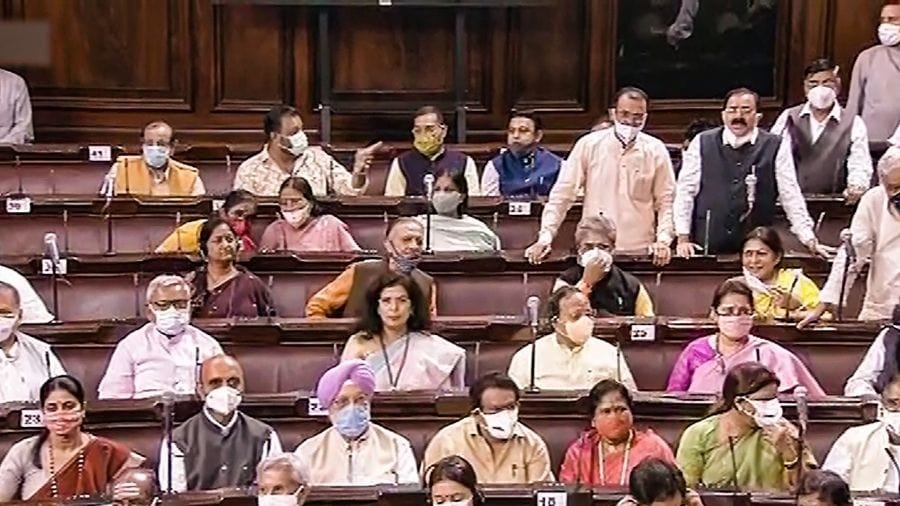 Opposition TMC MPs on Thursday tore papers and flung them into the air, throwing the Rajya Sabha into bedlam as IT Minister Ashwini Vaishnaw read a statement on the alleged snooping using an Israeli company spyware Pegasus.

TMC and other Opposition party members rushed into the Well of the House as Vaishnaw was called to make a statement over the issue.


We are approaching the Rajya Sabha chairman seeking action against them as their behaviour is a blow to parliamentary decorum.
- Union minister requesting anonymity

Advertisement

They shouted slogans and while TMC MP Shantanu Sen TMC tore papers that appeared to be copies of the statement that the minister was to make.

As papers were flung into the air, the minister could not complete his statement and instead laid a copy of it on the table of the House.

Deputy Chairman Harivansh asked members to desist from unparliamentary behaviour, before adjourning the proceedings of the House for the rest of the day.

Opposition MPs had stalled the proceedings in the earlier part of the day as well, forcing two adjournments with not even officially listed papers being allowed to be laid.

As soon as the House assembled for the day, Congress leader Digvijaya Singh tried to raise the issue of raids against the media group in multiple cities.

They shouted slogans over alleged snooping and other issues.

Government sources said Leader of the House in Rajya Sabha Piyush Goyal and his deputy Mukhtar Abbas Naqvi reached out to the Opposition members and assured them that the minister will reply to their queries after he makes his statement, but in vain.

With Vaishnaw not able to read out the complete statement, it was laid on the table and the House was adjourned.

However, the situation remained tense in the House as the two sides engaged in heated exchanges.

Sen alleged that Union minister Hardeep Puri verbally abused him in the Upper House of Parliament and was on the verge of physically assaulting him before he was rescued by his colleagues. Puri has so far not commented on the issue.

The ruling Bharatiya Janata Party (BJP) has described the opposition conduct as a "new low" in Parliament.