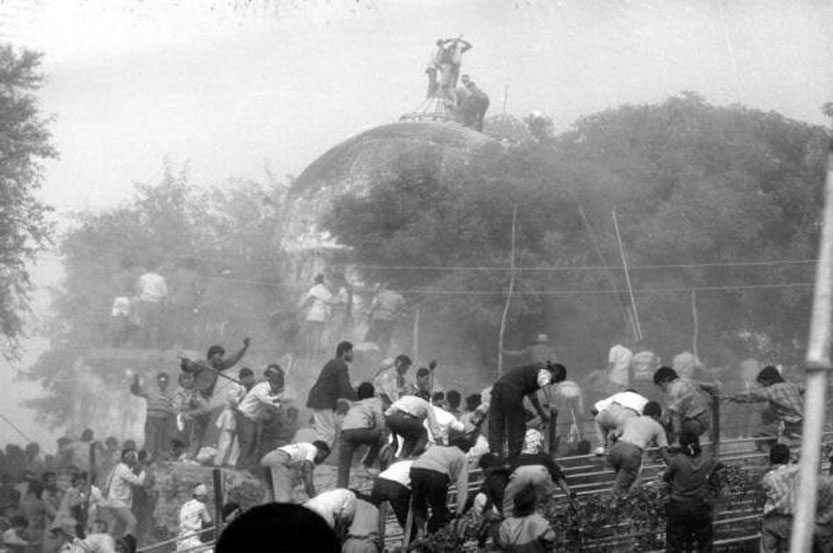 In 1992, a large crowd of kar sevaks demolished the Babri Masjid in Ayodhya. The land was taken over by the Centre in 1993 — through the Acquisition of Certain Area at Ayodhya Act — in the wake of the riots triggered by the demolition.
Telegraph picture
Furquan Ameen   |   New Delhi   |   Published 16.11.19, 10:27 AM

Zafaryab Jilani, who represented the Muslim parties in the Ayodhya title suit, has said three of the original five petitioners wanted a review of the unanimous judgment.

He added that the three petitioners wanted to turn down the offer of the five-acre alternative plot to build a mosque. But whether the petitioners are in a position to decide on this is itself a question.

On November 9, in a unanimous verdict, the Supreme Court gave Hindus the right to the entire 2.77-acre disputed plot on which the Babri Masjid once stood. The Uttar Pradesh Sunni Central Wakf Board was offered five acres in Ayodhya or nearby to build a mosque or whatever structure it wanted to.

In such a scenario, can the five petitioners accept or reject the land?

According to Jilani, the court had the wrong notion that the Sunni waqf board had any preferential claim to the land. He said the review petition would be a representative suit, filed on behalf of the entire Muslim community. “The law regarding this kind of suit is that it cannot be withdrawn by one party. It cannot be compromised by any one party,” Jilani said. “We do not consider any other land to be the decree. We oppose it. We say that no land can be accepted in exchange for the lost land.”

The All India Muslim Personal Law Board will take the final call on the review petition and the land on November 17, he said.

“Among the petitioners, two have agreed to reject the land and file a review petition. The third one will be on board soon. I’ve asked the fourth one to decide for himself. And the fifth one, Jamiat Ulema, has constituted a committee for this. They have also refused to accept the land,” he said.

Jilani's reply to this news website came shortly after the Uttar Pradesh Sunni Central Waqf Board chairman yesterday expressed worry that rejecting the land might amount to contempt of court.

It is now clear that wakf board chairman Zufar Farooqui and Jilani, who represented the board in the land title case, have decided to walk different paths since the verdict.

Jilani, who is the All India Muslim Personal Law Board secretary, had said soon after the verdict that the Muslim side would see if a review petition should be filed. But Farooqui subsequently ruled out a review.

“We are seeking advice because suggestions are coming from various sections of the community,' Farooqui said yesterday. 'Some of them have said we should reject this (land) offer, while some are in favour of building a library or something else. There are various suggestions,” he said.

Farooqui said the wakf board would also have to see if not accepting the land would amount to contempt of court.

Jilani, also convenor of the Babri Masjid Action Committee, rejected the contempt-of-court theory. “This is not a contempt of court. You read the judgment. The court has said that this (the land) will redress a grievance. We don’t want such redress,” he said.

In its 1,045-page judgment, the apex court said that “it is necessary to provide restitution to the Muslim community for the unlawful destruction of their place of worship.” The court directed the governments at the Centre and Uttar Pradesh to allot the five acres to the UP central Sunni waqf board.

Jilani said the parties would request the Supreme Court not to violate the law of the land, but added that all the original parties need not be on board, anyway. “This is a representative suit. The entire Muslim community is the plaintiff. So, anyone from the community, who has not been a party earlier, can approach the Supreme Court claiming to represent the community,” he said.

When asked about Jilani, Farooqui said: “He was the counsel in this case and he argued it very competently but the case is now closed. Now, I’m the representative of the board. He might be speaking on behalf of the personal law board.”

The waqf board is scheduled to meet on November 26 to decide on further action.