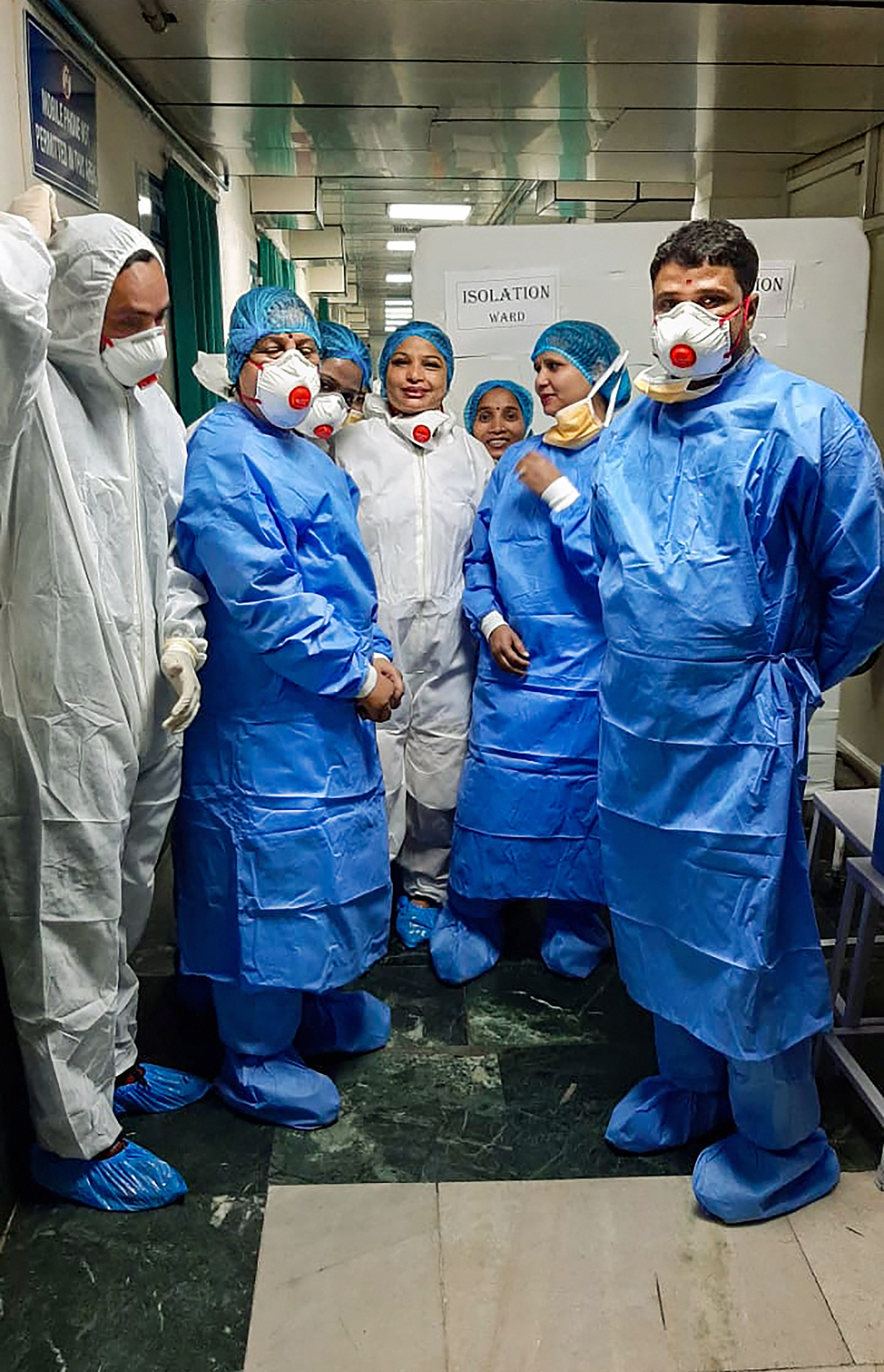 A team led by director of NCDC Dr Sujeet Singh visits the Ram Manohar Lohia Hospital to review the preparedness of the management for providing treatment to any suspected cases of the coronavirus (CoV), in New Delhi, Monday, Janaury 27, 2020.
PTI
PTI   |   New Delhi   |   Published 28.01.20, 06:26 AM

Three persons with a travel history to China have been kept under observation at an isolation ward of the RML Hospital in New Delhi for a possible exposure to novel coronavirus (nCoV), officials said on Tuesday.

The three -- all men aged between 24 and 48 -- were admitted on Monday and their samples have been sent for testing to ICMR-NIV Pune laboratory, Dr Minakshi Bhardwaj, medical superintendent of RML Hospital, said.

While two of the men are residents of Delhi, one hails from NCR.

All the three patients have respiratory problems like cold and cough along with fever and they self-reported at the designated health facility to deal with such cases.

According to Bhardwaj, two of the patients had returned from China about a week ago while the other about a month back.

Till Monday, a total of 33,552 passengers arriving in India from China in 155 flights have been screened

As per data received on Jan 14, total 17 samples have been received by the ICMR-NIV Pune Lab, out of which 14 have been already been tested and found negative.

Several people have been kept under observation in several states including Kerala, Kolkata and Maharashtra following screening for a possible exposure to respiratory virus, which has spread in China.

The Centre has stepped up vigil in areas bordering Nepal in view of a confirmed case of nCoV detected there.

The Prime Minister's Office on Saturday reviewed India's preparedness to deal with any situation amid mounting global concerns over rising cases in China.

A 24x7 NCDC Call Centre (+91-11-23978046) has been made operational to monitor the list of contacts furnished by the ministry of external affairs, provide details of district and state surveillance officers to those who seek them, and in case of any clinical query, direct the concerned to the relevant Integrated Disease Surveillance Programme (IDSP) officer.

Vardhan, who held a review meeting to analyse the preparedness for prevention and management of nCoV in India, also spoke to the chief Minister of Uttarakhand on Saturday and assured him of all support for screening at the border with Nepal.

The health ministry has urged passengers, who have a travel history to China since January 1, 2020, to come forward for self-reporting to the nearest health facility if they experience any symptoms such as fever, cough, respiratory distress, etc., and also inform the doctor treating them.

On Saturday, the Union health ministry also issued a fresh advisory asking passengers to follow certain dos and don'ts if they are in China or if they are travelling or returning from China.

The advisory stated that during their stay in China, if they feel sick and have fever and cough, then they should cover their mouth while coughing and sneezing, seek medical attention promptly and report to the Indian Embassy in China.

The advisory also said that if they feel sick on flight, while travelling back to India from China, they should inform the airline crew about their illness, seek mask and self-reporting format from the airline crew, avoid close contact with family members or fellow travellers and follow other directions of crew and airport health officer.