The connoisseur of the arts, who tutored acting greats such as Naseeruddin Shah and Om Puri, had been unwell for a few days 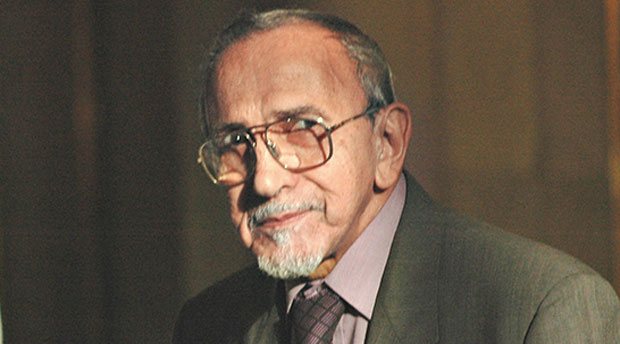 Ebrahim Alkazi, theatre doyen, legendary drama teacher and connoisseur of the arts, died on Tuesday after suffering a heart attack, his son said. He was 94.

Alkazi, who was the longest serving director of the National School of Drama and mentored generations of actors, produced plays such as Girish Karnad’s Tughlaq, Dharamvir Bharati’s Andha Yug and Mohan Rakesh’s Ashadh Ka Ek Din.

He is survived by his son Feisal Alkazi and his daughter Amal Allana, both well-known theatre directors.

“Dad died at 2.45pm after a massive heart attack. He had been admitted to the Escorts hospital the day before yesterday,” Feisal told PTI on Tuesday. The funeral will be held on Wednesday.

Alkazi, who tutored acting greats such as Naseeruddin Shah and Om Puri, had been unwell for a few days.

Tributes poured in for Alkazi, who was NSD director from 1962 to 1977. He was described variously as “father of modern Indian theatre” and “last of the Romans”.

Prime Minister Narendra Modi expressed sadness at Alkazi’s demise and said he would be remembered for his efforts to make theatre more popular and accessible across India.

Naseeruddin Shah told PTI: “Many like me owe our passion for theatre to this formidably knowledgeable man. His contribution to sophistication and polish in staging and imparting a sense of discipline to every aspect of theatre work is unequalled.”

“Alkazi Sahib was, I can say, the renaissance man in the true sense. He was the one who showed us new ways of looking at theatre. I can very well imagine because before he left for Delhi to start the National School of Drama, he was closely connected with the renaissance moment in visual arts, what is known as the Bombay group of M.F. Husain, S.H. Raza, Akbar Padamsee and others. So his connection, not only with theatre but also with visual arts, was something which gave a different perspective,” Palekar said.

Rohini Hattangadi said Alkazi had nurtured actors like her. “He was really a good teacher not just on the stage but beyond that, always present, commenting or showing something about work or life. He was a great director. I have lot of love and respect for him and I was also scared of him,” she said.

When Hattangadi bagged the role of Kasturba Gandhi in Richard Attenborough’s Gandhi, she wanted to share the news with only two people — her father and Alkazi.

For his contribution to theatre, Alkazi received numerous awards, including the Padma Shri in 1966, the Padma Bhushan in 1991, and India’s second highest civilian award, the Padma Vibhushan, in 2010.

Apart from revolutionising Indian theatre, Alkazi was also a photography enthusiast, painter and art curator. Alkazi founded the Art Heritage Gallery in Delhi with his wife Roshen Alkazi in 1977.