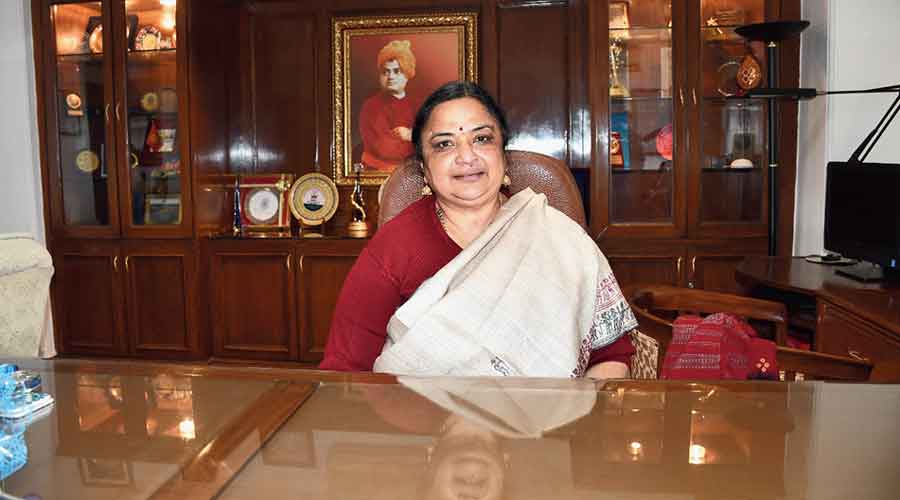 An academic who had professed equal agreement with Mahatma Gandhi and his assassin Nathuram Godse and slammed student protesters at Jawaharlal Nehru University as “Naxal groups” that should be banned has been appointed the first woman vice-chancellor of JNU.

Soon after Santishree Dhulipudi Pandit took charge on Monday, students and others flagged some of her old tweets that described the farmer agitators as “liars and losers”, anti-citizenship-act protesters as “jihadis”, and Trinamul as a party of “terrorists”.

Pandit, who taught politics and public administration at the Savitribai Phule Pune University, succeeds M. Jagadesh Kumar, who has been appointed University Grants Commission chairman. Kumar has been accused of crushing dissent at JNU, seen as a Left bastion.

N. Sai Balaji, a research scholar at JNU, said while Kumar was a “closet Sanghi”, Pandit’s tweets suggested she was “openly spreading bigotry and hatred against certain communities, parties and protesters”.

Pandit was born in the Russian city of St Petersburg in 1962 and earned her PhD from the School of International Relations at JNU, her curriculum vitae on the Pune university website says.

According to the CV, some of the chapters she has contributed to multi-author books bear the titles “Hindutva as a Political Ideology” and “The Rise of Hindu Nationalism in India”. The papers she has presented at seminars include one on “Hindutva: From Savarkar to the BJP”.

Pandit did not answer phone calls from this newspaper or reply to emails seeking the logic behind her tweets and her reaction to the criticism that she was biased.

Pandit’s old tweets, which drew much spotlight since morning, were accessible through the day but, late in the evening, her Twitter account seemed to suddenly have ceased to exist.

Earlier, farmer leader Yogendra Yadav had tweeted some of Pandit’s posts on the yearlong farmers’ agitation with the caption: “Introducing the new VC of JNU – clearly a role model of scholarship for its students and faculty.”

In May last year, Pandit had tweeted: “Farmers so called parasitic middlemen led by Yo Ya and Tikiat are liars and losers.”

The post, which appeared to refer to Yadav and fellow farmer leader Rakesh Tikait, came in response to a tweet by BJP worker Priti Gandhi that said: “Thanks to #FarmLaws, farmers in India are reaping Gold.”

In another tweet the same month, Pandit wrote: “Expected all riff raff, parasites and Dalals this so called farmers’ movement and AAP.”

During the anti-CAA protests in December 2020, Pandit had written: “If BJP is party of Godse then all parties that support Muslims like TMC is a party of all terrorists, invaders who raped and destroyed Hindu sacred spaces. They support the butchers of Bengal.”

On the subject of Godse, one of her tweets said: “I would agree both Gandhi and Godse, both read Gita and believed and took opposite lessons. Godse thought action was important and identified the solution for a united India in the assassination of one person Mahatma Gandhi. Sad.”

Another tweet, posted apparently in response to a critic of the CAA around the time Shaheen Bagh in Delhi had become the epicentre of the protests, said: “So what that is her opinion. You have Jihadis at Saheen Bagh talk worse things. The Owaisis are worse. You ignore them or even call them secular.”

In January 2020, after outsiders entered JNU and attacked students who were protesting a fee hike, Pandit had tweeted: “Losers from JNU who have lost control. Ban these extremist Naxal groups from campuses. Stop funding communal campuses like Jamia and St Stephens.”

JNU and the Jamia Millia Islamia university had witnessed student agitations against government policies, such as those on citizenship and the squeeze on grants for public universities. In December 2019, police were accused of entering Jamia and assaulting students for protesting against the CAA. St Stephens is a Church-run institution.

A.K. Mohapatra, dean of the School of International Studies at JNU, said Pandit was free to express her opinions.

“She is a good academic. She is entitled to her opinions. Whether she is biased or unbiased is a subjective interpretation,” Mohapatra said.

The JNU administration issued a media release to circulate a message from Pandit whose grammar and punctuation suggested a hurried drafting.

“As vice-chancellor, JNU, I thank both the Hon’ble Prime Minister and Minister of Higher Education for giving me this opportunity as the first woman and alumnus of this esteemed University from the State of Tamil Nadu,” it said.

“The immediate focus of this administration would be to provide clean administration, students friendly and gender sensitive environment for academic excellences. We would strive to implement NEP (National Education Policy) 2020 the vision of our Hon’ble Prime Minister especially in interdisciplinary and multi-disciplinary areas of studies, JNU rising to greater heights of academics and research. The focus would in constructing Indo-centric narratives. I look forward to working with students, faculty and staff to contribute in achieving these objectives.”