Can issuing work permits and settling people outside Assam resolve the problem temporarily? 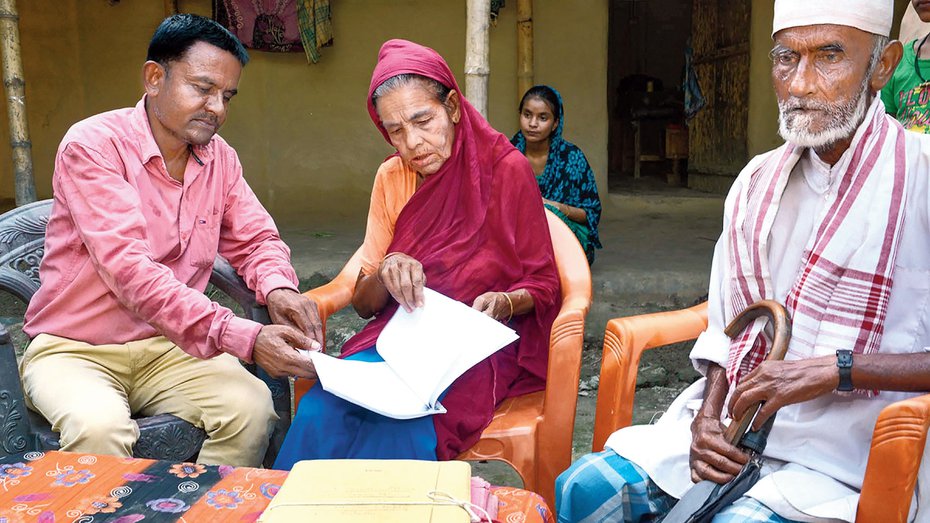 Another vital point here is, even though the liberal forces, mainly from mainstream India, are tangled in the politics of the day and reacting only to it, right-wing elements like the BJP are increasingly making an effort to convert it into a ‘national’ issue, but only to fit their agenda. Shah spoke of conducting an NRC across the country, called ‘illegal immigrants’ ‘termites’. The challenge for the AASU and the AGP, in coming times, would also be to guard against BJP kidnapping the issue to fulfil its religious agenda in Assam and firming up further its political hold over the state. In such a scenario, AGP and AASU’s primacy among the majority community will be at stake. The state would also not be too keen to see them flower. After all, they are being viewed by the BJP also as competing forces in this issue. Rather than promoting AASU, the BJP would like to see its student wing Akhil Bharatiya Vidyarthi Parishad (AVBP) occupy that space. Already, AASU and AGP are being projected as a spent force by some of the newer Jatiotabadi forces raising heads in the state.

In his Outlook article, (retired Union Cabinet secretary and a long-time North-east hand at the Centre) G.K. Pillai offered a temporary arrangement of granting ‘a five-year work permit’ to those not included in the final NRC, basically to maintain status quo, ‘to calm things down and allow a range of policy options to be developed carefully over the next couple of years’. He also wrote, ‘Around 75 per cent of these people could be moved out of Assam over the next decade and settled in other parts of the country.’

Both these proposals are not recent though. After the Supreme Court declined the Narendra Modi government’s plea on 30 November 2017, to further extend the date of readying the draft NRC and set 30 December 2017, as the final deadline (it later became the deadline for submitting a partial draft), I wrote a report for the Wire sieving policy suggestions made by researchers and activists thus far. What surfaced were broadly only these two suggestions—issuing work permits and settling some people outside the state. Besides, there could also be a solution by providing some amount of constitutional safeguards to the indigenous/khilonjia people as per a clause of the Assam Accord and thereby allay, once and for all, their festering fear of losing their political, economic and cultural hegemony in their homeland.

AASU, since the talks began with the Indira Gandhi regime, has been suggesting sharing Assam’s ‘burden’ with other states. Even after the signing of the Accord, it has continued with the stand on the ground that the state singularly took the ‘burden’ till 1971 and the remaining lot must be shared by rest of India. Its contention is, other Indian states must also ‘widen their home and heart’ for it is not just Assam’s problem but a ‘national problem’, something that Pillai too tried hinting at in that Outlook article. Some BJP central ministers too have spoken on that line already. But the question is: How practical is the suggestion? Which state would agree to share Assam’s ‘burden’? Political rhetoric aside, it is doubtful whether even West Bengal would do so despite linguistic affinity with people of East Bengal origin. Most of the migrants are poor, uneducated and industrially unskilled. Also, in a vote-driven parliamentary democracy, how would that demand of ‘caring and sharing’ be viewed by political players and existing voters in those states?

Importantly, is the issue being seen as a ‘national problem’ at all? I would say, not yet. A proof of it was the absence of liberal intellectual engagement with it at the national level in terms of finding a solution after the final draft NRC was published. It didn’t move beyond reacting to the politics of the day. It couldn’t rise to the level of addressing the pertinent issue of long-term migration causing a rift between the host community/communities and the migrant communities. That the central government had to formally bring in a special citizenship cut-off date in Assam through the Assam Accord only showed that migration from across the border had happened; that Assam’s is not a Hindu–Muslim but primarily a migration issue, which also involves the rights of several smaller communities and tribes. So it must be dealt that way. Over the years, various political forces have been misusing the issue for their benefit; new batches of politicians have catapulted themselves to positions of power through it but the mother issue has remained unresolved and therefore it needs wider intellectual participation to hit upon a solution, broadly agreeable to all stakeholders. Looking at how the NRC is being increasingly weaponized by the political forces to fit their agendas and electoral calculations, it is clear that the issue just can’t be left any more to only politicians to resolve.

Is it then a failure of the AASU, and like-minded organizations and influencers in the state to create a wider consensus in order to treat the issue as a ‘national problem’? Certainly, yes. As already mentioned, so far, the issue has been cleverly exploited by batches of politicians of all hues to win elections, and also by a section of people wielding their majoritarian chauvinism mainly on the poor of the minority communities, but precious little has been done to address the larger issue with the sincere intention of finding a lasting solution and thereby peace. The perpetuation of such a scenario may suit political players, but the Assamese/khilonjia communities and others must also introspect how detrimental is it to the delicate moral and social fabric of the state.

ASSAM: The Accord, The Discord by  Sangeeta Barooah Pisharoty. Excerpted with permission from Penguin Random House India

Human rights are clearly nowhere on the BJP’s agenda