The AIADMK hits back with 4-page ad with images of reports from a decade ago — when DMK was in power — about power cuts, alleged land-grabbing by the then govt 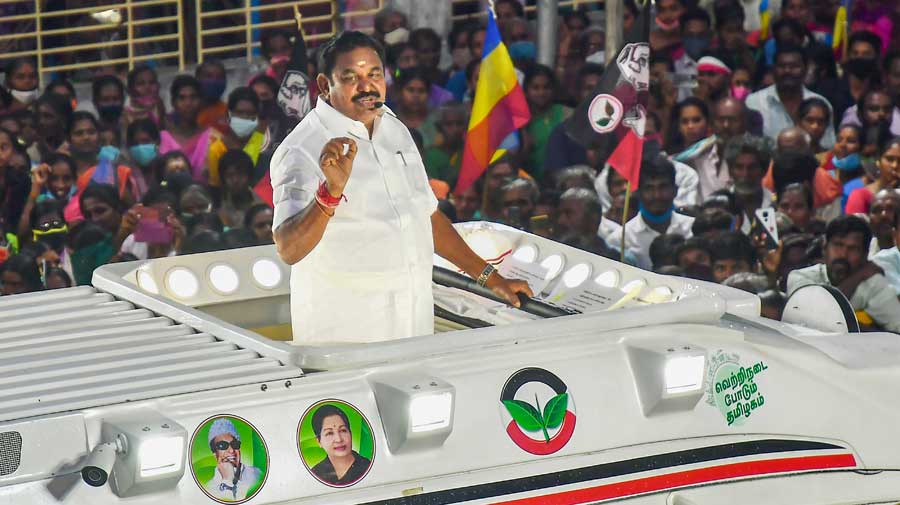 The campaign for the April 6 Tamil Nadu polls ended on Sunday evening, its last leg marked by a high-voltage ad blitz focused more on punch lines than bread-and-butter issues.

On Friday, the DMK-led alliance that includes the Congress, Left, MDMK, VCK, IUML and other small parties, took out a two-page ad in the major dailies urging the voters not to fall for the ruling coalition’s “bizarre fascist dreams”.

The ad contained cartoons attacking the Citizenship Amendment Act and the new farm laws, among other issues, and chided the ruling AIADMK for supporting ally BJP on these matters.

The AIADMK hit back on Sunday with a four-page ad strewn with images of news reports from a decade ago  — when the DMK was in power  — about power cuts and alleged land-grabbing by the then government.

In between, the BJP had come out with a full-page advertisement on Saturday charging the DMK with being anti-Hindu and corrupt. It also accused the DMK of doing nothing, as a partner in the then ruling UPA, to stop the killing of Tamils during the last phase of the Sri Lankan civil war in 2009.

Rarely has this kind of a media war been witnessed during elections in the state.

The BJP sought to send out a discreet eleventh hour signal to the voters by announcing the Dadasaheb Phalke Award for superstar actor Rajinikanth.

But it was DMK president Stalin who made merry with a famous one-liner from a Rajinikanth film, where he plays a man named Arunachalam: “Aandavan solran, Arunachalam seigiraan (Whatever God says, Arunachalam does).”

Stalin used it in the sense of “Whatever Stalin says, Palaniswami does”  — a sly allegation that chief minister E.K. Palaniswami’s campaign consists of parroting promises earlier made by the DMK leader.

While Congress leader Rahul Gandhi has portrayed the battle as a BJP-RSS bid to dominate the state by “controlling” the AIADMK, Stalin has concentrated his attacks largely on the AIADMK.

Stalin made a whirlwind tour of the 16 Chennai city constituencies on Sunday, winding up in Kolathur from where he is contesting.

He accused the AIADMK government of the last 10 years of ignoring issues related to people’s daily lives.

“Commission, corruption, collection” was the ruling party’s motto, he alleged, adding that even the government’s handling of the pandemic was not free of these “three Cs”.

AIADMK campaigners led by Palaniswami and deputy chief minister O. Panneerselvam dubbed the DMK the “originators” of corruption in the state, asking voters not to give the party of “land grabbers” another chance. They also raised the spectre of lawlessness if the DMK returned to power.

The AIADMK’s principal ally, the BJP, built on this negative narrative.

“Do you want development or Udayanidhi Stalin?” asked Union home minister Amit Shah, hitting out at Stalin’s son while campaigning for actor Khushbu Sundar, BJP candidate from the Thousand Lights constituency in Chennai.

Udayanidhi is contesting from the neighbouring Chepauk-Triplicane seat where 30 per cent of the electorate are minorities and view the new citizenship regime with concern.

Udayanidhi has directed a series of barbs at Prime Minister Narendra Modi in his campaign speeches, prompting the BJP to accuse him of defamation in a complaint to the poll panel on Saturday.

Palaniswami and Panneerselvam electioneered on their respective home turfs of Edappadi in Salem and Bodi in Theni on Sunday, consolidating their campaigns on the last day.

Actor Kamal Haasan’s MNM and the AMMK, led by Sasikala’s nephew T.T.V. Dhinakaran, leading the two other fronts battling for the 234-member Tamil Nadu Assembly, spiritedly ploughed their own furrows, unfazed by the glitter of the two Dravidian majors’ campaigns.

Campaigning ended on Sunday also for the 30-seat Puducherry House.

Tamil Nadu: Too many in fray