Chidambaram to stay in custody in spite of bail 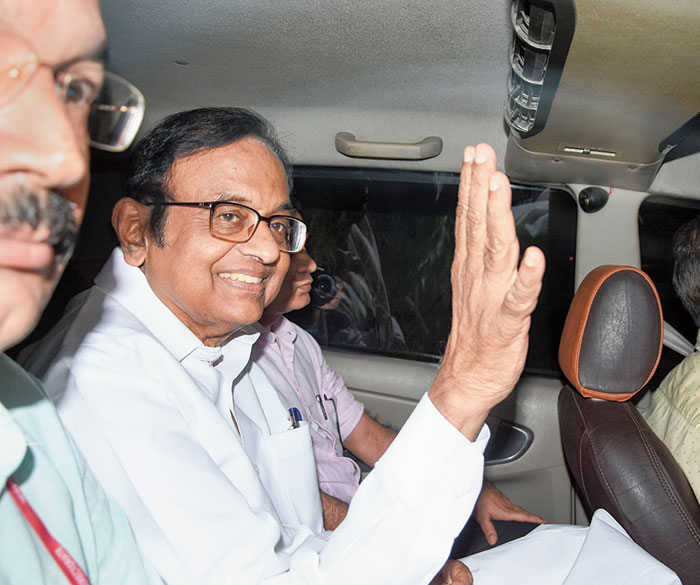 The Supreme Court on Tuesday granted bail to former finance minister P. Chidambaram in a CBI corruption case, saying there was no evidence of his having tried to influence witnesses and denying he was a “flight risk”.

But the Congress veteran, jailed since August 21, cannot walk free immediately since the Enforcement Directorate too had arrested him on October 16 in connection with a money-laundering angle in the same case, involving FDI clearance to INX Media.

While granting bail, the bench of Justices R. Banumathi, A.S. Bopanna and Hrishikesh Roy imposed conditions such as a bar on Chidambaram leaving the country without permission from the special CBI court trying him.

The apex court noted that Chidambaram had been in custody for over two months, that his co-accused had already been granted bail and that he was 74 and said to be in poor health.

“Till date, there has been no allegation regarding influencing of any witness by the appellant (Chidambaram) or his men directly or indirectly. In the number of remand applications, there was no whisper that any material witness has been approached not to disclose information about the appellant and his son,” the court, quashing the high court’s denial of bail, said.

“It appears that only at the time of opposing the bail and in the counter-affidavit filed by the CBI before the high court, the averments were made that ‘the appellant is trying to influence the witnesses and if enlarged on bail, would further pressurise the witnesses’.

“CBI has no direct evidence… of (the) appellant directly or indirectly influencing the witnesses. As rightly contended by (Chidambaram’s counsel Kapil Sibal), no material particulars were produced before the high court as to when and how those two material witnesses were approached.

“There are no details as to the form of approach of those two witnesses — either SMS, email, letter or telephonic calls — and the persons who have approached the material witnesses. Details are also not available as to when, where and how those witnesses were approached.”

The court rejected solicitor-general Tushar Mehta’s argument, on the CBI’s behalf, that Chidambaram would flee the country like the bank-fraud accused businessmen Vijay Mallya and Nirav Modi.

“Each case has to be considered on the facts and circumstances… and on its own merits…. We are unable to accept… that ‘flight risk’ of economic offenders should be looked at as a national phenomenon and be dealt with in that manner merely because certain other offenders have flown out of the country,” the bench ruled.

“(It) cannot… be put in a straitjacket formula so as to deny bail to the one who is before the court, due to the conduct of other offenders, if the person under consideration is otherwise entitled to bail on the merits of his own case.”

Chidambaram had challenged the high court’s denial of bail while the CBI had moved a cross-appeal against the portion of the high court order that said the politician was “not a flight risk”. The apex court dismissed the cross-appeal.

It, however, added that its observations in the matter of bail, and those of the high court, would have no bearing on the trial at the CBI court.It also stipulated a Rs 1 lakh bail bond with two sureties of an equal amount, and asked Chidambaram to deposit his passport with the trial court.

Chidambaram is being prosecuted over a Foreign Investment Promotion Board clearance to INX Media for FDI worth Rs 305 crore against an approved Rs 4.62 crore while he was finance minister in 2007. While the CBI is probing bribery and criminal conspiracy, the ED is investigating money-laundering.