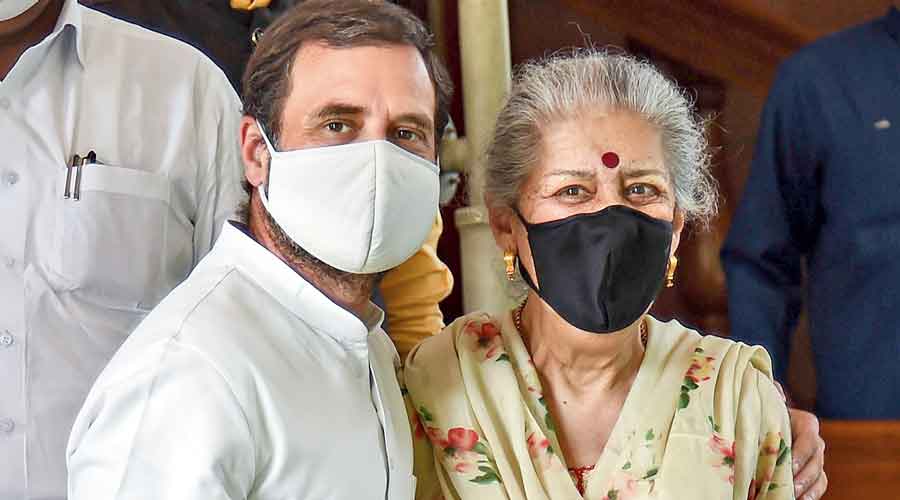 Punjab Congress veteran Sunil Jakhar has caused huge embarrassment to the party by describing former chief minister Charanjit Singh Channi as a “liability” whose “greed” pulled the party down.

Although Punjab Congress chief Navjot Singh Sidhu had been saying that Channi was an undeserving candidate, Jakhar’s statement puts Rahul Gandhi’s choice under a cloud of suspicion.

Rahul had presented Channi as a poor man from a humble background and tried to create a political narrative on the basis of his caste. Channi was the first Dalit chief minister of Punjab, a state where the Scheduled Castes form around 34 per cent of the population.

Jakhar was probably responding to newspaper reports suggesting that senior leader Ambika Soni had at Sunday’s Congress Working Committee meeting said the state leaders did not support Channi even as the high command had created a national asset by naming him the chief minister.

Jakhar tweeted: “An asset – Are you joking? Thank God he wasn’t declared a ‘National Treasure’ at the CWC by the ‘Punjabi’ lady who proposed him as CM in first place. May be an asset for her but for the party he has been only a liability. Not the top brass, but his own greed pulled him and the party down.”

May be an asset for her but for the party he has been only a liability. Not the top brass,but his own greed pulled him and the party down pic.twitter.com/Lnf6vJgRzF

By “greed”, Jakhar might have meant corruption in the light of the Enforcement Directorate raid on Channi’s nephew Bhupinder Singh Honey in a money-laundering case linked to illegal sand mining. The ED arrested Bhupinder in the run-up to the Assembly election and claimed to have recovered Rs 10 crore.

Prime Minister Narendra Modi and AAP chief Arvind Kejriwal had described Channi as “corrupt” after that incident. Even Sidhu had bitterly commented on this episode, arguing that Punjab could be salvaged only by men of integrity.

Jakhar later told a news agency that his tweet was “not to accuse anyone of anything”.

He said: “Disappointing to see the kind of sycophancy played out in CWC yesterday. Report suggests certain leaders who’ve been Rajya Sabha MPs for 30 years, claim to be Punjab’s voice in CWC, are hoodwinking party high command.”

He added: “This recommendation for the chief minister’s post was done by these very people. Instead of acknowledging it, they’re trying to put it on Rahul Gandhi. People of Punjab wanted change, but the person who was projected was caught with his hand in the till. Remedy was worse than the disease.”

Jakhar had initially objected to Channi’s choice as his name was almost final for the chief minister’s post after the removal of Amarinder Singh. But it was Ambika Soni who opposed Jakhar’s candidature, arguing that Punjab must have a Sikh as the chief minister. Jakhar was seething with rage even at that time, condemning the effort to divide Punjab on religious lines. But he changed his stance on Channi after a discussion with Rahul. He thanked Rahul for choosing a Dalit and a poor man.

Knives are now out against Channi after the debacle in the election.

Mohd Hustafa, former IPS officer and Sidhu’s adviser, tweeted: “If Congress leadership still considers Channi instead of getting out of Channi delusion, then even Gods can’t save the party. Rest in a couple of days on my handle.”