Besides confining her to Mumbai, her bail conditions include a gag on speaking about the court proceedings to the media 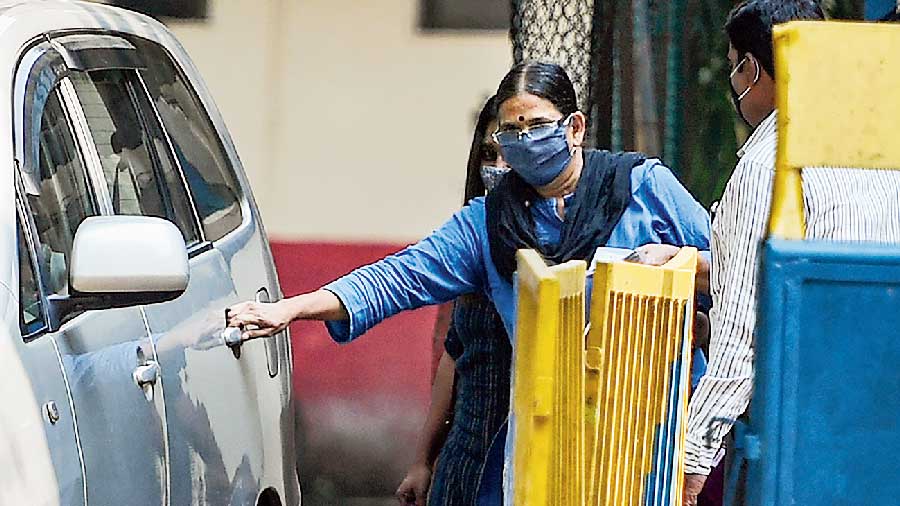 Lawyer and trade unionist Sudha Bharadwaj walked free on bail on Thursday after more than three years in prison in connection with the Elgaar Parishad case.

Bharadwaj, 60, emerged from the Byculla women’s prison after 12.30pm, wearing a blue kurta and black dupatta. She was greeted by her 24-year-old daughter Mayshaa Singh, lawyers including her colleagues from Chhattisgarh, and her activist friend Smita Gupta from Delhi who had come with daughter Ragini Jha.

Besides confining her to Mumbai, Bharadwaj’s bail conditions include a gag on speaking about the court proceedings to the media, contacting any of the co-accused or any “person involved directly or indirectly in similar activities”, and hosting any gatherings besides those involving near relations.

“She is someone who has an established (legal) practice in Bilaspur, and it would be good if she is allowed to work. Mumbai is very expensive to live in but we are happy that she is out,” Gupta told The Telegraph.

On Thursday, Bharadwaj met all her lawyers as friends tried to arrange accommodation for her in Mumbai, which will be verified by the National Investigation Agency (NIA) that is probing the case.

After her release, her reception team took her to the Theobroma outlet in Colaba. They bought pastries for the legal team. Bharadwaj only wanted curd rice.
Bharadwaj has severe diabetes, arthritis, ischaemia, osteoporosis and serious dental conditions.

Bharadwaj, who practised in Chhattisgarh High Court and is national secretary of the People’s Union for Civil Liberties, had been arrested from her home in Faridabad in August 2018. Like her co-accused, she has been charged under the anti-terrorism law Unlawful Activities (Prevention) Act (UAPA).

Bombay High Court granted her default bail last week on the ground of Maharashtra police delaying the investigation before it was handed over to the NIA.

Bharadwaj is accused of being an “active member” of the banned CPI (Maoist). The allegedly terror-linked acts attributed to her in the Maharashtra police’s chargesheet include meetings, discussions and participation in a seminar on the UAPA in Delhi.