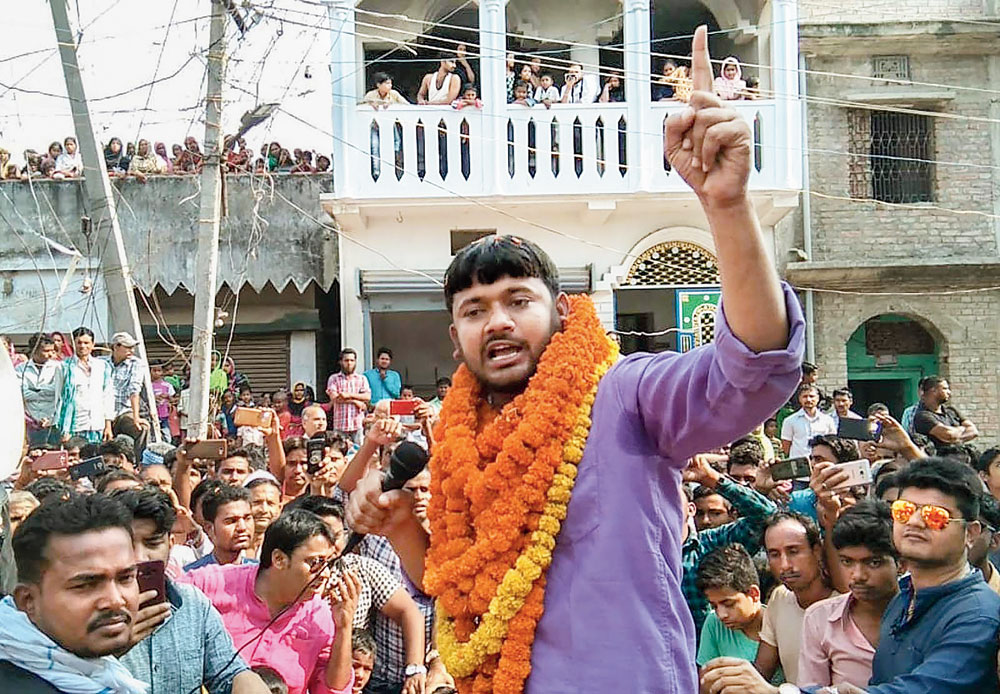 The contest in Begusarai has acquired significance in the 2019 Lok Sabha elections because it is defying the expected political binaries. The BJP candidate in the fray is the outgoing MSME (micro, small and medium enterprises) minister, Giriraj Singh, who got elected last time from Nawada. After displaying initial reluctance to contest from Begusarai, he is finding it difficult to generate enthusiasm even among the local BJP supporters.

Popular youth leader Kanhaiya Kumar was widely anticipated to be the Mahagathbandhan candidate for the constituency. When the RJD decided to field MLC Md. Tanveer Hasan instead — a candidate who had lost in 2014 to the BJP — many felt disappointed. Since the announcement of Kanhaiya Kumar’s candidature by the CPI, however, spontaneous support has poured in from all sections of the Begusarai electorate. Large turnouts in Kanhaiya’s mass contact programmes are already visible besides the overwhelming response to his crowdfunding appeal through which Rs 70 lakh was raised in less than a week. The rally on April 9 (Tuesday), the day he files his nomination papers, is likely to be impressive.

Several factors have converged to lend momentum to Kanhaiya’s campaign. First, he has emerged as a symbol of resistance against the atrocities witnessed over the last few years, like the assassination of Gauri Lankesh, the institutional victimisation of Rohith Vemula or the disappearance of Najeeb. Those outraged by the alarming rise of hate crimes and lynchings are identifying with Kanhaiya’s spirited struggle against the Narendra Modi regime.

Second, while challenging Modi’s narrative on national issues, Kanhaiya’s campaign remains firmly rooted in Begusarai. Born in Bihat village, the son of the soil who returned with a doctorate in international studies from JNU after his eventful stint as the students’ union president, he has evoked a sense of pride among the local people. His active participation in the local struggles of the women anganwadi sevikas and farmers have helped in gaining the trust of the working people.

Despite attempts, communal polarisation is clearly not working for the BJP in Begusarai. Rather, the electorate is keen to listen, engage and debate on the issues of employment, farm prices, water availability, education, healthcare and the state of basic infrastructure, cutting across entrenched caste-community-political divides. The impact of demonetisation and GST on the informal sector is a major issue. Kanhaiya’s demand for setting up a university named after the famous poet Dinkar and an AIIMS at Begusarai have also been received well.

Begusarai had once been a stronghold of the CPI that threw up stalwart leaders like Chandrashekhar Singh. While the BJP had won the seat in 2014, with the former Left leader, late Bhola Singh, moving to the BJP, the CPI does retain significant influence. Kanhaiya’s candidature has not only energised the CPI cadre, but it is also attracting new sections from the first-time voters, youth and women.

This has the potential of upsetting traditional electoral equations.

Kanhaiya’s main asset lies in his capacity to present the progressive ideas of the Left in a fresh and popular idiom, free from past baggage - like calling the struggle of the left as one between plutocracy and democracy (“note-tantra nahin loktantra”). He has also characterised the elections as a battle between plunder and lies versus peoples’ rights and truth (“loot aur jhooth ke khilaaf haq aur sacchai ka ladai”), which has won many hearts. The challenge lies in translating the repository of goodwill into votes on April 29.