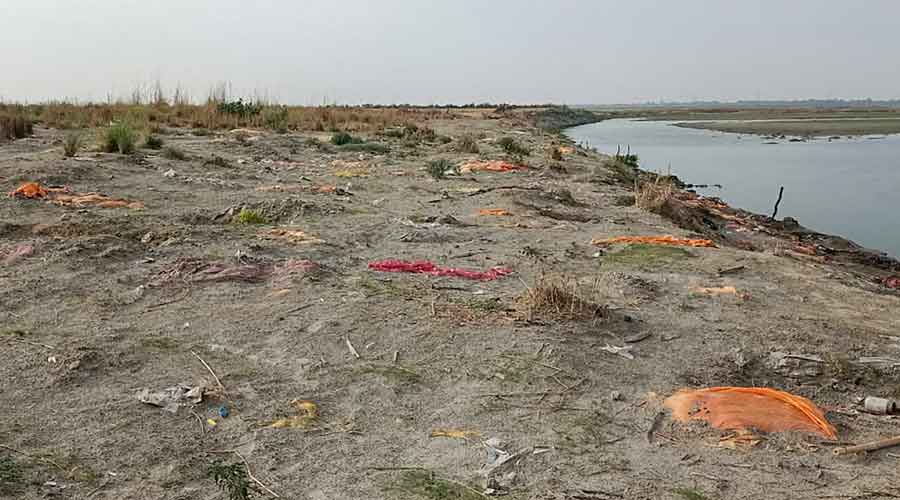 Prime Minister Narendra Modi on February 27 said that Varanasi no longer disgorged dirty sewage water into the Ganga, eight years after claiming “Mother Ganga” had summoned him to the temple town and that he would cleanse her soon.

On February 28, however, a senior engineer with the Uttar Pradesh Jal Nigam, which looks after the state’s sewage treatment plants (STPs), confirmed that Varanasi city discharged at least 100 million litres of untreated sewage into the river every day.

Other Jal Nigam officials and a river pollution expert, Saurabh Singh, said the actual volume of untreated sewage flowing into the Ganga was 200 MLD (million litres a day) in Varanasi.

Singh said the situation had been made worse by the slowing of the Ganga’s flow in recent years because of two ongoing government projects — dredging to set up a cruise service, and widespread construction for a riverfront tourism programme.

While contesting from Varanasi in the 2014 general election, Modi had declared: “Nobody has called me here, Mother Ganga has summoned me.”

He had made the cleaning of the river an election issue and launched the Rs 20,000-crore Namami Gange Programme a month after taking over as Prime Minister.

On February 27 this year, Modi told a meeting of booth-level BJP workers in Varanasi: “The content of all the 80 sewer lines in Varanasi first go to treatment plants now, before the cleaned water is discharged into the river.”

A Jal Nigam official told this newspaper: “Varanasi produces 450 MLD of sewage every day but we treat only 250 MLD. The remaining 200 MLD flows directly into the river. This is because the five STPs here don’t work at full capacity. The reasons are many, and include poor management.”

The official’s boss, a senior Jal Nigam engineer, pared the figure down. “There are two nullahs between Raj Ghat and Assi Ghat that we have yet to cover for treatment. While we are treating 250 MLD of sewage at our five treatment plants in Varanasi, the city is generating 350 MLD (daily). We are working on new projects to treat all the sewage before the water is released into the river.”

The engineer admitted a funds problem. “We have outsourced the maintenance work of the STPs. There is some problem because we have not been receiving funds for this purpose for the last one year,” he said.

Singh, who runs the Innervoice Foundation, an NGO that works on water pollution, said: “Varanasi produces 450 million litres of sewage per day but treats only 250 MLD. That too doesn’t happen every day because of frequent technical snags and a lack of maintenance at the plants.”

Mannu Sahani, 68, a boatman at Adi Keshav Ghat, said: “We used to drink the Ganga’s waters 15 years ago. Now we use tap water, which comes just once a day for one hour in the colonies near the Adi Keshav Ghat.”

He said that earlier, too, many nullahs carried untreated sewage into the river.

“But the flow of the river was fast and used to take the filth away. Now, with the dredging and riverbank constructions, the river has slowed substantially,” Sahani said.

“At least six nullahs still directly eject untreated sewage into the Ganga. Among these are the Shahi and Assi nullahs, the two biggest in the city.”

Saurabh said: “The dredging and riverbank constructions have slowed the river’s base flow (derived from groundwater). There’s now a foul smell in the river because of the lack of flow.”

The government is building huge platforms along the Ganga to develop the riverfront under the Namami Gange programme. Several food kiosks have already come up at Assi Ghat.

“The ghats were meant for devotees of the Ganga and the Kashi Vishwanath temple here. Even foreign visitors were attracted to this place because of the spiritual ambience,” Saurabh said.

“But Modi and chief minister Yogi Adityanath want to monetise these places. From the cleaning of the Ganga, they have shifted their focus to ‘developing’ the river and the ghats as places for dining and recreation.”

Another source of dirty water in the Ganga is the Varuna river that originates near Jaunpur and flows into the Ganga at Varanasi near the Adi Keshav Ghat. While the Ganga’s waters are green in midstream these days because of an uncontrolled growth of algae, white foams of dirt cover the Varuna’s surface.

Chandrashekhar Kapur, general secretary of the Kashi Vikas Samiti, a social organisation, said: “Kashi is gradually getting fed up with Modi. Kashi accepts someone with zeal but dumps them silently when it realises it has welcomed the wrong person.”