Single mom in Kerala fights her way into police force

Aanie SP did it all, selling anything from curry powder to lemonade while she left her son at a crèche and then cooking, washing and studying at home 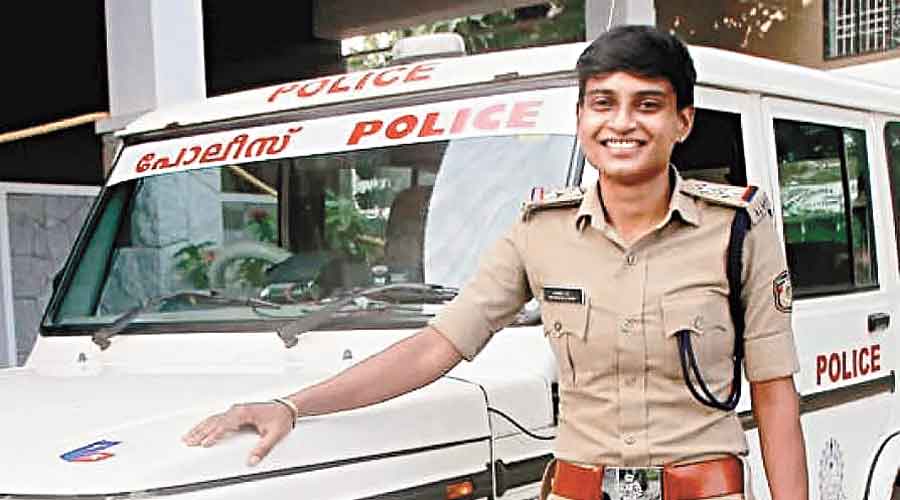 Ten years ago, Aanie S.P. was selling ice cream and lemonade at the Sivagiri Mutt fair in Varakala, an abandoned mother barely into her 20s struggling to raise a two-year-old son all by herself.

On Friday, the now 31-year-old was appointed a sub-inspector of police in the same town, located in Thiruvananthapuram district. Aanie is now basking in a shower of congratulatory messages from across Kerala lauding her single-handed and successful battle against odds.

Going by the social media messages, Aanie appears to be a hero Kerala desperately needed at a time a spate of suicides by newly married women over dowry and domestic abuse has pricked its conscience.

“I keep telling all women who contact me for whatever problems they face to never accept defeat, as a tiny ember of hope will always be there to help us find the spark of success and happiness,” Aanie told The Telegraph on Monday.

Aanie’s life had been thrown into turmoil when, still in her teens, she had defied her middle-class parents to move in with her boyfriend. She was then an undergraduate student of sociology at the K.N.M. Government College in Thiruvananthapuram.

Shortly after the baby’s birth 12 years ago, the father deserted mother and child. Aanie was left with a mountain to climb: pay rent, take care of herself and the boy, continue her own education.

She did it all, selling anything from curry powder to lemonade while she left the baby at a crèche at a concessional Rs 400 a month, and then cooking, washing and studying at home.

“I took refuge at my grandmother’s home (near her parents’ place) for over two months since I had to complete my degree exams. After that I lived alone in rented rooms in Thiruvananthapuram, taking care of my child and earning my livelihood,” she said.

Aanie received no help from her parents or elder brother. As with most single mothers, life was full of challenges.

“One can imagine the problems women face when they have to live alone. So I went for a makeover by cutting my hair and switched to trousers and shirts to look like a man,” she said.

“Now I’m very comfortable in this appearance and attire since I’m a police officer,” Aanie, who rides a Royal Enfield motorbike, grinned.

Her father, who used to work in the Gulf, had always wanted her to become an IPS officer. But it was a relative who in 2016 suggested she take the sub-inspectors’ test.

With the result of the test getting delayed, she took the constables’ test successfully and got a posting with the Special Armed Police in Thiruvananthapuram. But, determined to become a sub-inspector, she took the SI test again in early 2019 and cracked it.

As she began her sub-inspector’s training at the police academy in Thrissur, her mother moved in with her. But her father and brother remain estranged.

After a year’s training, Aanie was sent back to Kochi as a probationary sub-inspector. On June 25, she received her formal appointment as a sub-inspector in Varakala.

The police department has accepted her request for an immediate transfer to Kochi, where she believes her 12-year-old son Shivasurya can get better schooling.

On Sunday afternoon, the Kerala police celebrated her achievement with a Facebook post, titled “The story of our colleague who overcame challenges”. It immediately triggered a flood of applause from Keralites.

“Congratulations to Aanie who achieved success in life with her determination. Let her success inspire many others,” tweeted Malayalam film star Mohanlal.

Congrats Anie Siva, SI of police! Estranged at 18yrs, Anie beat the odds alone to build life for herself & her son.
In a dismally male dominated society where atrocities against vulnerable women are occurring everyday, her life and achievements are truly inspirational. pic.twitter.com/f3FLiqng6H

Leader of the Opposition V.D. Satheesan of the Congress congratulated Aanie for building a “life for herself & her son” against heavy odds.

Appearing to allude to the recent dowry suicides, Satheeshan tweeted: “In a dismally male-dominated society where atrocities against vulnerable women are occurring every day, her life and achievements are truly inspirational.”