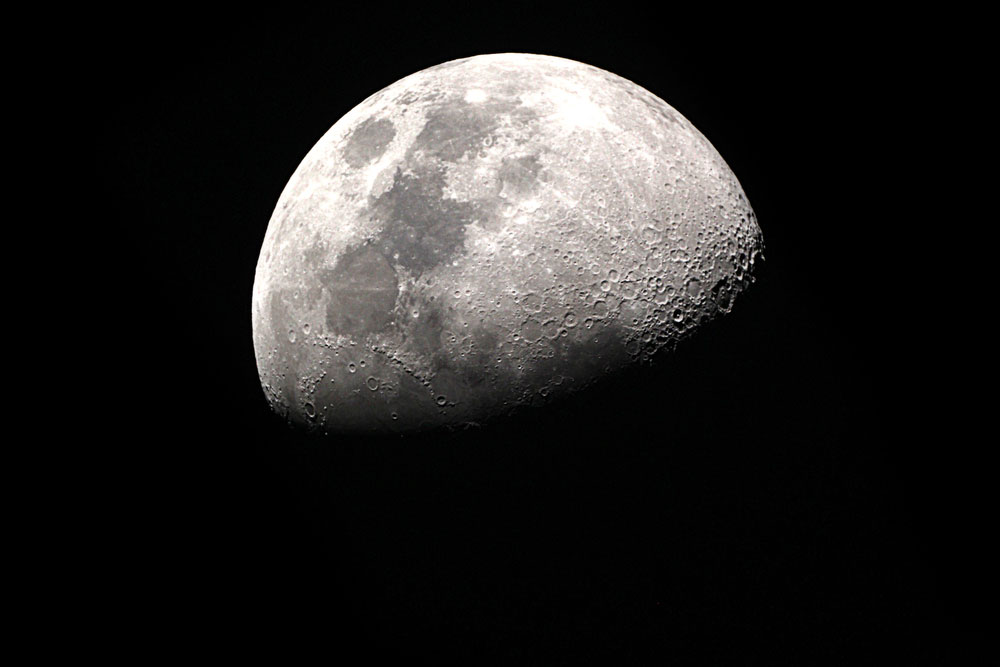 The scientific goals of the Rs 978-crore mission include studies and analyses of the lunar terrain, minerals and dust and a search for the signatures of the hydroxyl radical and water ice on the Moon.
(Shutterstock)
G.S. Mudur   |   New Delhi   |   Published 14.07.19, 07:31 AM

India hopes to become the fourth country to soft-land a space probe on the Moon through the Chandrayaan-2 spacecraft, to be launched early on Monday into a 53-day journey to an unexplored territory near the lunar south pole.

The spacecraft — made up of a box-shaped orbiter and a soft-lander carrying a rover — sat on Saturday atop a 12-storey rocket, India’s most powerful launcher to date, at the Sriharikota island spaceport, awaiting the final countdown to its 2.51am launch on Monday.

The scientific goals of the Rs 978-crore mission include studies and analyses of the lunar terrain, minerals and dust and a search for the signatures of the hydroxyl radical and water ice on the Moon.

A follow-up to the Chandrayaan-1 lunar orbiter mission in 2008, the Chandrayaan-2 lander mission is expected to help refine the current ideas about the origin and evolution of the Moon, the Indian Space Research Organisation has said.

Engineers and scientists at multiple Isro sites have worked on the Chandrayaan-2 mission since its approval by the Manmohan Singh government in September 2008, designing the orbiter, lander, scientific payloads and trajectory for the 384,000km journey.

Only three countries — the former Soviet Union, the United States and China — have explored the Moon by soft-landing spacecraft on its surface. The European Space Agency and Japan have probed the Moon through orbiters and impactors, as did India with Chandrayaan-1.

“Technology has evolved since the first successful landings during the 1960s, but new technology can add to the complexity of missions, and such a mission is always a huge challenge.”

The giant rocket, the Geosynchronous Satellite Launch Vehicle (GSLV) Mark-III, is designed to ferry the Chandrayaan-2 orbiter-lander pair into an initial “Earth parking orbit”, with the nearest position at 170km and the farthest at 40,400km.

Over the next several days, Isro engineers will fire rockets from the spacecraft multiple times to nudge the spacecraft into higher orbits until it moves into a lunar transfer trajectory, an orbit that carries it close to the Moon.

As the spacecraft enters the Moon’s “sphere of influence”, onboard thrusters will slow it just enough to be “captured” by the Moon’s gravity and slip into a lunar orbit.

On September 6, the scheduled landing day, the lander carrying the rover will separate from the orbiter and perform a series of complex manoeuvres to slow itself down and land on the Moon.

Chandrayaan-2’s lander, Vikram, carries a rover, Pragyan. Both are crammed with scientific payloads, bundles of lightweight electronic components, sensors and probes designed to measure lunar surface temperatures, look for any seismic activity, and determine the abundance of elements around the landing site.

The sensors aboard Chandrayaan-1 had helped detect signatures of water molecules, but the extent to which such molecules are distributed on the lunar surface, below the surface, and in the lunar exosphere remains unclear.

Senior Isro officials, explaining the choice of the landing site, have said the lunar south pole is attractive from the point of view of looking for water because the surface area that remains in the shadow there is much larger than that near the Moon’s north pole. Scientists speculate that water ice may be found in the permanently shadowed areas.

The six-wheeled, 27kg Pragyan, powered by a 50W solar power source, can travel up to 500m at a speed of 1cm per second.

Pragyan is expected to make India the third country to explore the Moon with a robotic rover after the former Soviet Union (through Lunokhod-1 in November 1970) and China (Yutu in December 2014).

The orbiter too carries scientific payloads, including a high-resolution camera to help ensure the lander’s safe touchdown away from craters or boulders, and a radar to quantitatively estimate water ice in the Moon’s polar regions.

The orbiter has a planned lifetime of one year, while the lander and the rover are to remain functional for 14 days, or one lunar day.