Dikshit says ‘no’ to AAP alliance but door not shut 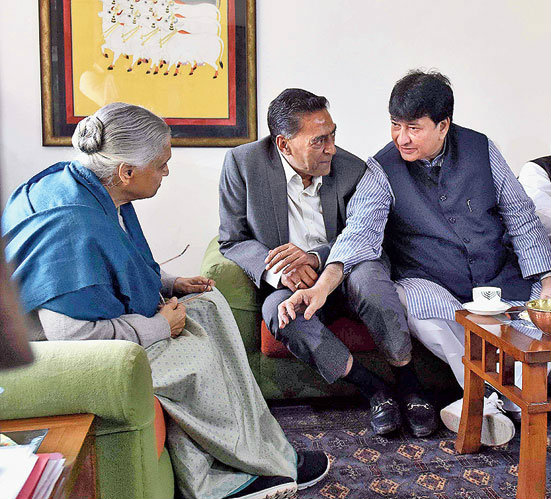 The possibility of a Congress alliance with the Aam Aadmi Party (AAP) has not been extinguished despite a categorical rejection by the party’s Delhi unit in a meeting with Rahul Gandhi here on Tuesday.

Although Delhi Congress chief Sheila Dikshit and AICC Delhi in-charge P.C. Chacko categorically ruled out an alliance with AAP after a meeting, insiders privately said the pressure on both parties to come together had not evaporated and the high command might have to finally enforce a decision against the will of the local unit.

The issue will now go to the Congress committee on alliances and the core group, which may assess the situation in the wider perspective of the national goal to curb the BJP. There is a fear among senior leaders that the party might end up harming its primary objective of preventing Narendra Modi’s return to power by giving primacy to local factors.

This fear has forced veterans in the Opposition camp to revisit the question of alliances in other states too, including Uttar Pradesh where the Samajwadi Party and the Bahujan Samaj Party had shut the door on the Congress. There are murmurs of a fresh negotiation on an offer of 8 to 10 seats to the Congress. The rethink has been forced by feedback that the BJP might have recovered some ground amid the war hysteria.

After the meeting in the morning, Chacko told The Telegraph: “Though I am personally of the opinion that there should be an alliance, nobody in our party is in favour. Rahulji has always said he cannot go against the majority sentiment. It is now decided that there will be no alliance with AAP.”

Of the 11 senior leaders present at the meeting, only Ajay Maken argued in favour of an alliance while Dikshit, former state presidents and current working presidents unambiguously opposed it. Ironically, Maken was the main opponent of an alliance till a couple of months ago when he was heading the Delhi unit.

On Tuesday, Maken confronted Dikshit when she told Rahul the situation had improved for the Congress in the past two-three months.

A leader who attended the meeting said on condition of anonymity: “Maken asked if Sandeep Dikshit (Sheila’s son) will contest his old seat of East Delhi if the situation had indeed improved. Dikshit tried to wriggle out, describing it as an irrelevant question, but Rahul intervened to say that all senior leaders should contest. Maken was suggesting that a three-way split in votes would help the BJP.”

Some leaders brought up the question of Assembly elections, arguing that the prospects of Congress revival in Delhi would weaken if there was an alliance for the Lok Sabha election and that Kejriwal would return as chief minister. To this, Maken responded by asking what if the Congress failed to win any Lok Sabha seat or came third, fighting alone. He asked if that would not seal the Congress’s fate for the Assembly elections, and whether winning a few seats in alliance with AAP was not a wiser option.

Rahul, however, said his conscience does not allow him to overrule such an overwhelming majority. He has decided to honour the state leadership’s collective opinion and that is how the Congress is contesting against Trinamul in Bengal. The party president could not have bluntly overruled the majority opinion as that reflects the grassroots workers’ sentiment. But if that view is overruled after following due process and seeking the opinion of higher committees, Rahul will not be blamed personally.

AAP minister and Delhi unit convener Gopal Rai accused the Congress of going against public sentiment but added: “Our stand remains unchanged. All grand alliance leaders don’t want (Opposition) votes to be divided, hence, despite 100 ideological differences with the Congress, we are ready to drink this poison for the nation… We never spoke to the Congress about seats. In fact, they haven’t spoken to us for the last three days.”

The last word on alliances has not been spoken yet and realignments could take place soon after the announcement of election schedule, probably after March 8.