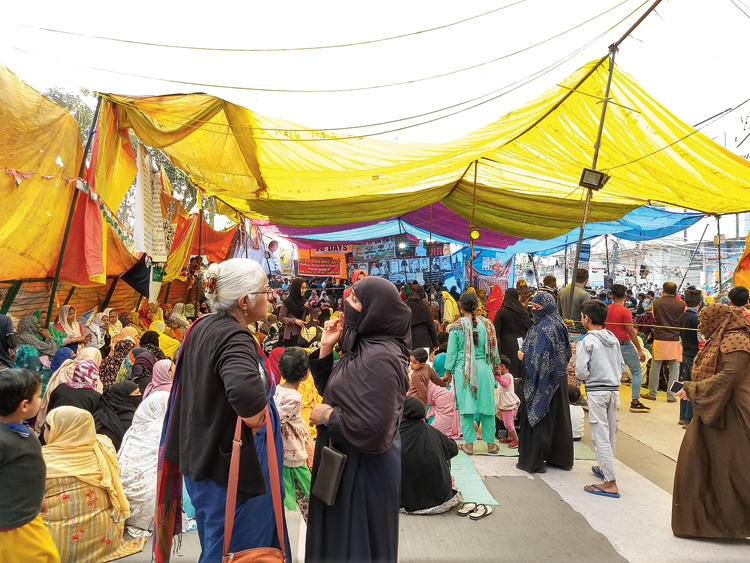 The Shaheen Bagh protesters kept chanting “Hindu-Muslim bhai bhai” on Sunday but shunned loudspeakers on police advice, amid renewed threats from extremist Hindu groups to evict them against the backdrop of the riots in northeast Delhi.

Police presence has been strengthened at the barricades and assemblies have been banned under Section 144 in the surrounding areas in response to the fresh threats from two little-known Hindutva outfits.

All the major sites of protest against the new citizenship matrix have higher numbers of police guarding them following the Delhi riots, but the participants have stepped up their own vigil against any possible mob attack.

At Shaheen Bagh, venue of the largest and longest-running women-led agitation, local volunteers are keeping guard at night.

“The police have assured us about safety, but we are cautious. Local people sit on (guard) duty at night,” one of the organisers, Shaheen Kausar, told The Telegraph.

“We have decided to ignore the calls from extremist organisations for us to be evicted; we know these are scare tactics. We don’t fear the mobs.”

On Saturday evening, two Hindutva groups had called off a planned demonstration near the Shaheen Bagh protest venue under police pressure. A similar stunt they had tried earlier in February too had fizzled out, with few turning up after the police warned of strict action.

But with their threat of forcibly clearing the road still looming, neither the police nor the protesters are taking any chances.

“The police allowed the (Shaheen Bagh) protest to go on (on Sunday) but urged the women not to use the loudspeakers. They have accepted this condition,” said Khurshid Alam, standing guard near the venue. “We are watchful lest goons try to provoke us.”

There was a fairly big crowd at Shaheen Bagh, located in southeast Delhi, on Sunday. The women sitting inside the tent said they would resist any efforts to scare them away.

“We are ready to face any challenge,” said Mumtaz, a resident of the Batla House neighbourhood.

The women kept breaking out into chants of “Hindu-Muslim bhai bhai” to underline a message of unity against the backdrop of last week’s riots. The shops in nearby lanes remained closed for most of the day but began opening in the evening, emboldened by the continuing peace.

An activist associated with several anti-citizenship-act protests said there had been back-channel talks with the police, and even with a BJP leader, to ensure there was no violence on Sunday.

However, the protesters and residents have braced themselves for any riot-like situation, keeping in mind how last week’s violence erupted after a group led by BJP politician Kapil Mishra confronted anti-citizenship-act marchers in Jaffrabad.

On Saturday, after Mishra had led a “peace march against jihadi terror”, several young men chanted “shoot the traitors” inside Rajiv Chowk Metro station. Police detained six of them and the Delhi Metro issued a statement reiterating that any “demonstration or nuisance is prohibited” on its premises.

Incidents like this, and the frequent rumours of mobs regrouping, continue to keep Delhi tense.

“People have made up their minds not to go down without confronting the goons if they come. They feel the police can’t be trusted, given the videos of police complicity in the riots,” lawyer and anti-citizenship-act protester Firoz Khan told this newspaper.

“At night, several people keep watch on every street in Okhla (where Shaheen Bagh lies).”

During the riots the police had evicted the Jaffrabad and Khureji Khas sit-ins by women, and two activists there have been booked for attempt to murder. They are the Congress’s Ishrat Jahan and Aam Aadmi Party supporter and rights activist Khalid Saifi.

Currently, the Seelampur protest, which is off the roads, is the only major protest in northeast Delhi, which had several such sites.

In south Delhi, the protest at Hauz Rani continues even after several participants were booked for a scuffle with the cops.

Javed, an activist at Hauz Rani, said a conscious effort was being made to avoid any confrontation with the Right-wingers.

“At night, the police sleep in their bus — so it is pretty much our volunteers standing guard. We are aware that people will try to provoke us, attack us, but we must remain peaceful and remain in the park (where the protest is on),” he said.

Additional reporting by our bureau