Among those to resign was health minister Harsh Vardhan, who helmed the Covid response that has brought worldwide scorn on Prime Minister Modi 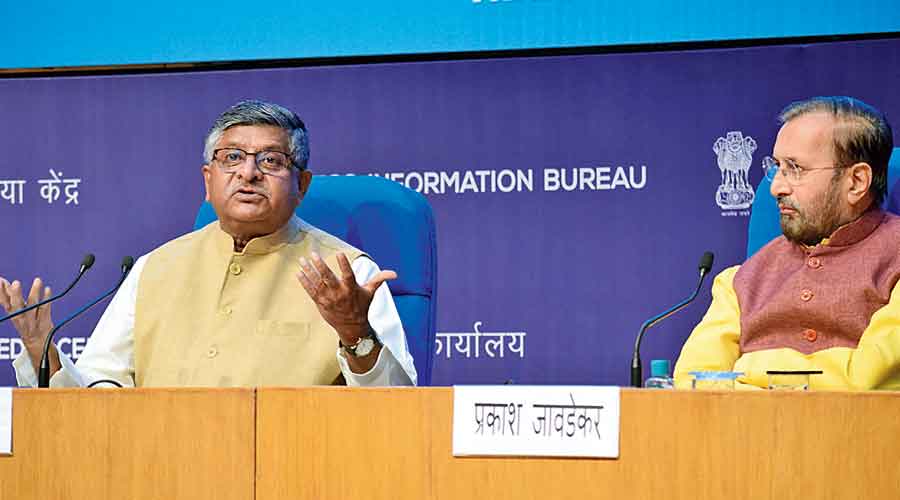 A spate of ministerial resignations from Wednesday afternoon marked the lead-up to the evening’s Union cabinet shuffle, the mayhem enlivened by Babul Supriyo who candidly admitted being “asked to resign” before quickly amending the disclosure.

Several key ministers were among the 12 who were dropped, their departures suggesting a government admission of failure in areas such as health and education, both severely impacted by the Covid crisis.

Among the cabinet ministers to resign — the government strove to cloak the open secret that they had been “pushed” — was health minister Harsh Vardhan, who helmed the Covid response that has brought worldwide scorn on Prime Minister Narendra Modi.

Also gone were heavyweights Ravi Shankar Prasad, who held the crucial law and IT ministries and led the government charge against Twitter, and Prakash Javadekar whose information and broadcasting portfolio made him the government’s official spokesperson. Javadekar also held charge of the environment, forests and climate change ministry.

The rolling of heads seemed to reflect a hunt for scapegoats in a heavily centralised administration where a Prime Minister who took all the decisions desperately needed an image boost.

The cat was let out of

the bag when Babul, junior environment minister and Asansol MP, wrote initially in a Facebook post: “Yes, I have been asked to resign & I have!!”

Unsurprisingly, he had to recant shortly afterwards, removing the earlier post and issuing a clarification: “Yes, I have resigned from the council of ministers (As I had framed it earlier, ‘Asked to resign’ may not be the right way to put it).”

Babul said he felt sad but was happy for the new faces from Bengal entering the government.

Raiganj MP Debasree Chaudhuri, junior minister for women and child development, too stepped down. Babul and Debasree made way for fellow Bengal MPs Shantanu Thakur, the Matua community leader, and Nisith Pramanik, reflecting a consistent pattern of the replacements (not portfolios)being picked from the same state or region.

Harsh Vardhan, 66, has been replaced with fellow Delhi MP Meenakshi Lekhi, 54. Lekhi will be minister of state in the external affairs and culture ministries.

Government and BJP sources said the ministers who quit had been dropped following an extensive review by Modi. They said these ministers received calls from the leadership saying the Prime Minister wanted them to put in their papers.

The first two resignations to become public were those of education minister Ramesh Pokhriyal and labour minister Santosh Gangwar. Another cabinet minister to step down was Sadananda Gowda (chemicals and fertilisers), who is from Karnataka.

Pokhriyal cited poor health while the 72-year-old Gangwar said he would reveal the reason for his exit in a couple of days.

On Tuesday, the 73-year-old Thaawar Chand Gehlot had been eased out as social justice minister and appointed governor of Karnataka. Sources in the BJP said Modi wanted his cabinet “young and dynamic”.

The resignations by Prasad and Javadekar became known only when the President’s office issued a media release ahead of the swearing-in of the new faces and promoted junior ministers.

“The President, as advised by the Prime Minister, has accepted the resignations of the following members of the council of ministers, with immediate effect,” the release said, listing 12 names including that of Gehlot.