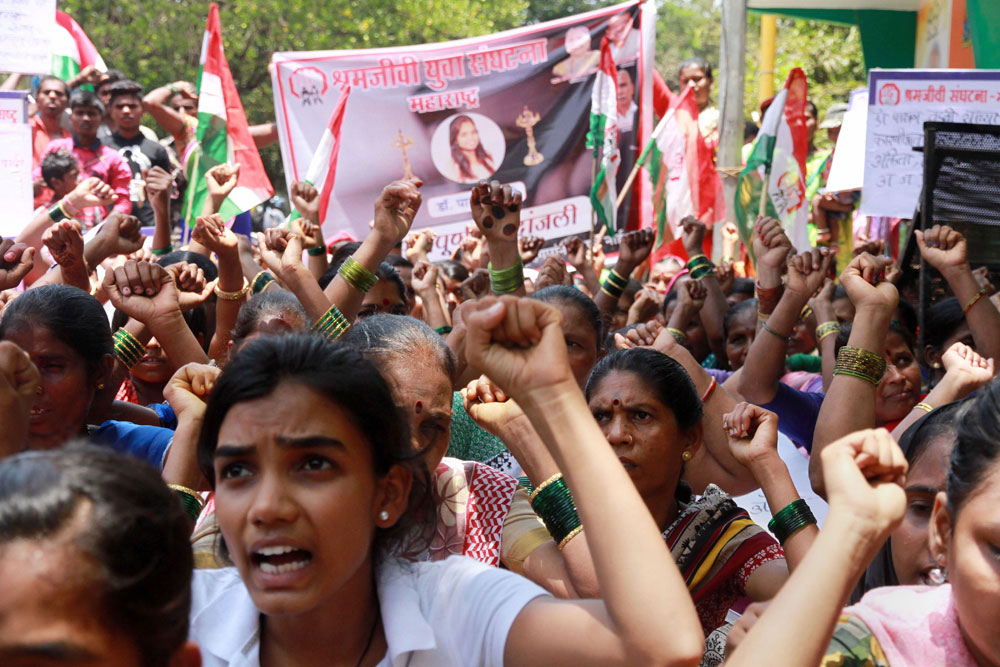 Activists stage a protest condemning the death of Payal Tadvi and demanding the arrest of the seniors who harassed her in Thane on Tuesday
Picture by PTI
PTI   |   Mumbai   |   Published 29.05.19, 01:15 AM

A doctor at a state-run hospital accused of driving a junior colleague to suicide after months of alleged caste-shaming was arrested on Tuesday, nearly a week after the tribal first-year postgraduate student of gynaecology had hanged herself in her hostel room.

Mehere was one of the three senior doctors against whom an offence had been registered after Dr Payal Tadvi, 26, killed herself on May 22.

The other two — Dr Ankita Khandelwal and Dr Hema Ahuja — have moved a sessions court for anticipatory bail, the official added.

All three have been booked under the Atrocities Act, the Anti-Ragging Act and the IT Act and under the penal code’s Section 306 (abetment to suicide).

Payal, who belonged to the tribal Bhil community and came from Jalgaon in Maharashtra, had twice complained to the campus authorities that three senior students were harassing her with caste taunts, her family members had said, but the Mumbai college took no action.

Tadvi’s family protested at the state-run hospital where she worked. Other protesters also joined Tadvi’s mother Abeda and husband Salman, demanding action against the three seniors accused of “torturing her by ragging and hurling casteist abuse at her”.

Protesters from the Vanchit Bahujan Aghadi and other Dalit and tribal organisations held demonstrations outside the BYL Nair Hospital here over Tadvi’s death, which has drawn comparisons to Dalit PhD scholar Rohit Vemula’s January 2016 suicide that had roiled campuses across the country.

Abeda said her daughter would have been the first woman MD doctor from their community. “Payal used to tell me about the torture she was facing from her seniors on petty issues. They threw files on her face in front of patients,” she said.

“Payal used to tell me not to give a written complaint against her seniors despite being harassed by them. She would say that would adversely impact their career.”

Chandrashekhar Azad, chief of the Bhim Army, a Dalit outfit, said he would visit Maharashtra if needed to “fight for justice for our younger sister”.

The Maharashtra State Commission for Women has taken cognisance of the matter and issued a notice to the hospital authorities seeking a reply within eight days on the action taken to implement the anti-ragging law.

On Monday, the three accused women doctors had sought a “fair probe” in the case.

In a letter to the Maharashtra Association of Resident Doctors (MARD), they said they wanted the college to conduct a fair investigation in the matter and “give justice” to them.

“This is not the way to do an investigation through police force and media pressure, without hearing our side,” the three said in the letter. The MARD has suspended the three doctors.

“We have credible inputs that the three doctors made casteist remarks against Dr Payal Tadvi, who allegedly committed suicide. We will cooperate with the police for further investigation,” a senior MARD official said.