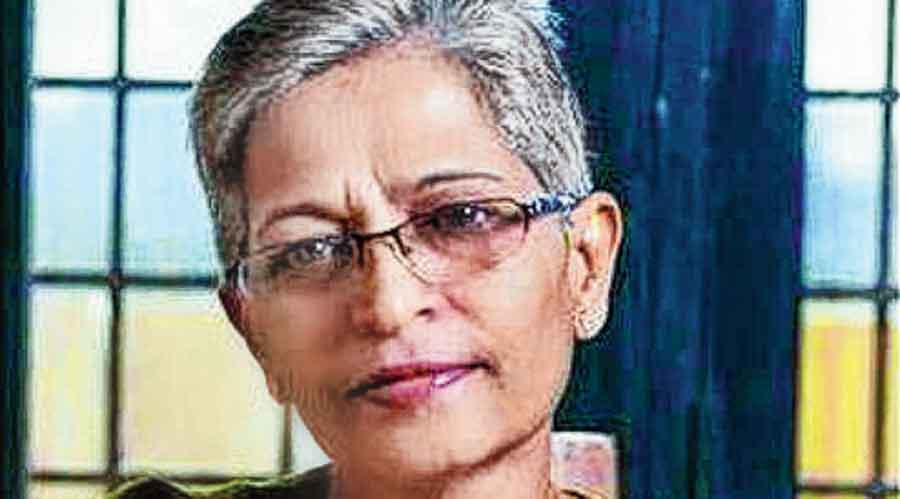 A man accused of harbouring the killers of journalist Gauri Lankesh will face stringent charges of organised crime that Karnataka High Court had set aside, the Supreme Court ruled on Thursday.

The high court order quashing the charges filed under the Karnataka Control of Organised Crime Act (KCOCA) against Mohan Nayak was “manifestly wrong and cannot be countenanced”, the bench of Justices A.M. Khanwilkar, Dinesh Maheshwari and C.T. Ravikumar said.

Gauri, a trenchant critic of the BJP-RSS, was shot dead outside her Bangalore home in 2017 and the investigators have linked many of the suspects to the Sanatan Sanstha, a Right-wing outfit.

Thursday’s verdict came on separate appeals filed by Gauri’s sister Kavita Lankesh and the Karnataka government challenging the quashing of KCOCA charges against Nayak. The BJP-led state government filed the separate appeal in the Supreme Court on July 26, some three weeks after Kavita filed her plea in the apex court and over three months after the high court pronounced its order.

Apart from the charges of murder and conspiracy under the Indian Penal Code, all the 18 accused — one of them absconding — face charges also under the KCOCA.

The 2000 act takes into account not just one specific offence but also other possible crimes committed by the accused or other members of the organised crime syndicate they allegedly belong to.

The Bangalore police commissioner had in August 2018 sanctioned the invocation of the KCOCA against the Gauri murder accused. But the high court quashed these charges against Nayak on an appeal from him, ruling the material wasn’t strong enough.

The high court had “completely glossed over the crucial fact” that sanction for the KCOCA charges had come from “the competent authority” (police commissioner) and that the trial court had taken cognisance of the “offence of organised crime committed by the members of organised crime syndicate including the writ petitioner (Nayak) — to which there was no challenge”, the apex court said.

“Further, the high court has clearly exceeded its jurisdiction in quashing the chargesheet (against Nayak) for offences punishable under (various sections) of the 2000 Act.”

The KCOCA sections mandate a jail term between five years and a life sentence.

Nayak, arrested in July 2018, is at Bangalore central jail. The investigators have linked him to the Sanatan Sanstha and accused him of putting up the alleged killer, Parashuram Waghmare, in the run-up to the murder.

Writing the judgment, Justice Khanwilkar stressed that the police commissioner had rightly approved invocation of the KCOCA against Nayak and the other accused, focusing at that stage only on the commission of crimes by an organised crime syndicate and on being prima facie satisfied about the material on record.

“Therefore, the specific role of the concerned accused is not required to be and is not so mentioned in the stated prior approval,” the judgment said.

“That aspect would be unravelled during the investigation.... The high court, thus, examined the matter by applying erroneous scale. The observations made by the high court in the impugned judgment clearly reveal that it has glossed over the core and tangible facts.”

But he added that Thursday’s judgment expressed no opinion on the merits of the case.