Dating back to the Mughal era, the district is crammed with buildings 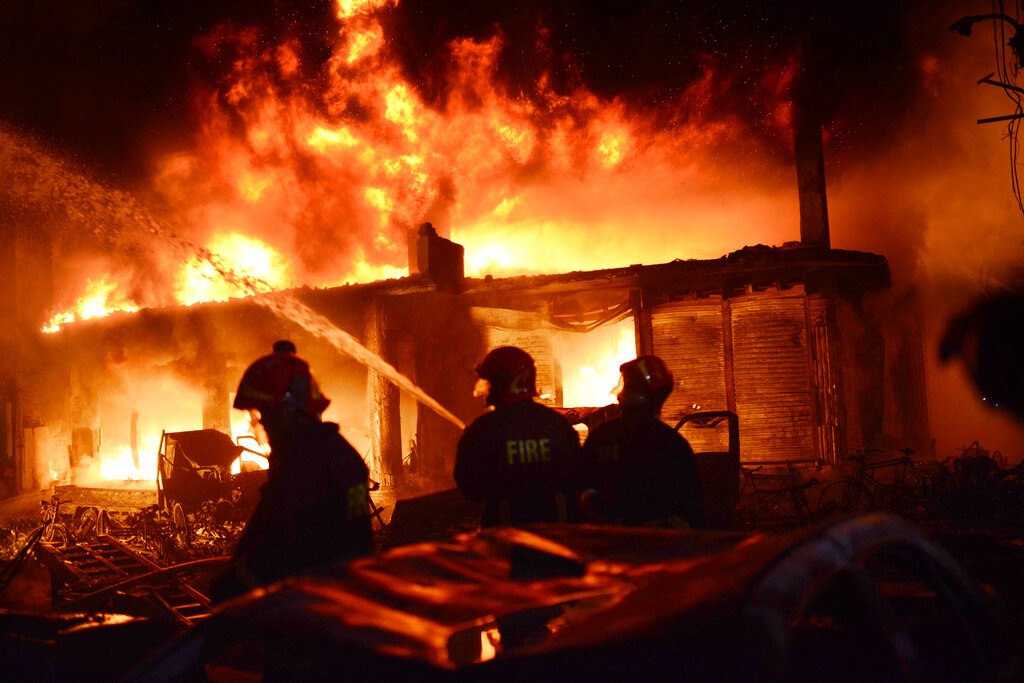 A devastating fire raced through densely packed buildings in a centuries-old shopping district in Bangladesh's capital, killing at least 70 people, officials and witnesses said on Thursday.

The fire in Dhaka's Chawkbazar area was mostly under control after more than 10 hours of frantic firefighting efforts. Some of the about 50 people injured were critically burned.

The district dating to the Mughal era, 400 years ago, is crammed with buildings separated by narrow alleys, with residences commonly above shops, restaurants or warehouses on the ground floors.

Locals and firefighters gather around buildings that caught fire on Thursday.
AP

Many of the victims trapped inside the buildings, said Mahfuz Riben, a control room official of the Fire Service and Civil Defence in Dhaka. 'Our teams are working there but many of the recovered bodies are beyond recognition. Our people are using body bags to send them to the hospital morgue, this is a very difficult situation,' he told AP by phone.

The fire services director, Maj. AKM Shakil Newaz, said 70 dead have been recovered and were taken to Dhaka Medical College Hospital. Ambulances were arriving carrying bodies, and relatives were mourning in front of the morgue.

Locals help a Bangladeshi firefighter who got unconscious for a while, while trying to douse flames, on Thursday.
AP

Most buildings in Chawkbazar are used both for residential and commercial purposes despite warnings of the potential for high fatalities from fires after one had killed at least 123 people in 2010. Authorities had promised to bring the buildings under regulations and remove chemical warehouses from the residential buildings.

Such tragedies are shockingly common in Bangladesh, where fires, floods, ferry sinkings and other disasters regularly claim dozens of lives or more.

In 2012, a fire raced through a garment factory on the outskirts of Dhaka, killing at least 112 people trapped behind its locked gates. Less than six months later, another building housing garment factories collapsed, killing more than 1,100 people.

Firefighters stand next to a charred vehicle in Dhaka's Chawkbazar on Thursday.
AP

The death toll from the latest fire could still rise as the condition of some of the injured people was critical, said Samanta Lal Sen, head of a burn unit of the Dhaka Medical College Hospital.

Sen said at least nine of the critically injured people were being treated in his unit.

Witnesses told local TV stations that many gas cylinders stored in the buildings continued to explode one after another. They said the fire also set off explosions in fuel tanks of some of the vehicles that got stuck in traffic in front of the destroyed buildings.

Some reports suggested many of the dead were pedestrians, shoppers or diners who died quickly as several gas cylinders exploded, and the fire engulfed the nearby buildings very quickly.

Officials said the firefighters struggled to get close to the scene because of heavy traffic and narrow alleys that were busy when the fire started.