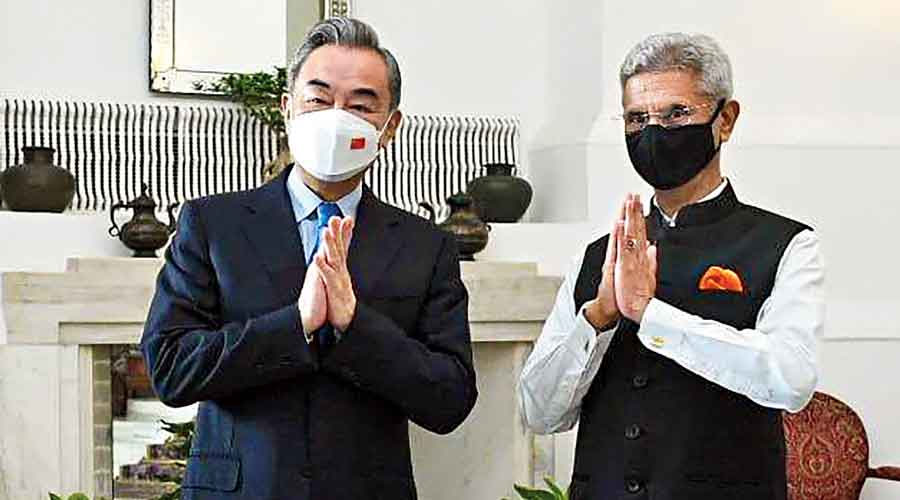 India on Friday ruled out normality in relations with China as long as troops remained amassed on the border, apparently declining Chinese overtures to reset ties on an assurance that Beijing does not seek a unipolar Asia and accepts New Delhi’s traditional role in the region.

Asked whether the three-hour meeting with his Chinese counterpart Wang Yi here was an indication of bilateral ties returning to normal, external affairs minister S. Jaishankar said an emphatic “no”.

“It is not. And it cannot be normal if the situation in the border areas is abnormal. And surely the presence of a large number of troops there in contravention of agreements is abnormality,” he said.

Reuters quoted Wang as saying that India and China should work together to promote peace and stability around the world and put the differences on the boundary issue in an appropriate position in bilateral relations.

“China does not pursue the so-called ‘unipolar Asia’ and respects India’s traditional role in the region. The whole world will pay attention when China and India work hand in hand,” he was quoted as saying.

Essentially, both Jaishankar and Wang were repeating their stated positions of the past two years since the Galwan Valley clash in June 2020. The only difference this time is that China sought the meeting in India as an outreach aimed at ensuring Prime Minister Narendra Modi’s participation at the BRICS Summit it will be hosting later this year.

However, China has not invited India to the regional conference it is convening on Afghanistan, Jaishankar confirmed.

“The impact of the tensions in the border areas on the overall relationship has been visible in the last two years. This is only natural since peace and tranquillity in the border areas have been the foundation of stable and cooperative ties,” Jaishankar said.

“Indeed, we have agreements that were designed explicitly to strengthen this foundation and prevent the kind of situation that we are seeing today,” he added.

Jaishankar said: “I was very honest in my discussions with the Chinese foreign minister, especially in conveying our national sentiments on this issue. The frictions and tensions that arise from China’s deployments since April 2020 cannot be reconciled with a normal relationship between two neighbours.

“Foreign minister Wang Yi spoke about China’s desire for a return to normalcy, while also referring to the larger significance of our ties. I was equally forthcoming that India wants a stable and predictable relationship.

“But restoration of normalcy will obviously require a restoration of peace and tranquillity. If we are both committed to improving our ties, then this commitment must find full expression in the ongoing disengagement talks.”

On the status of the disengagement, Jaishankar said progress had been achieved at several friction points.

“This needs to be taken forward since the completion of disengagement is necessary for discussions on de-escalation to take place,” he said.

“I would describe our current situation as a work in progress, obviously at a slower pace than desirable, and my discussions with FM Wang Yi today were aimed at expediting the process.”

Jaishankar said he had also told Wang that India found his statement on Kashmir at the Organisation of Islamic Cooperation (OIC) meeting in Islamabad “objectionable”.

Without getting into the specifics, Wang had endorsed views expressed on Kashmir at the OIC meeting and India had publicly made its displeasure known on the eve of his India visit.

Stressing there was a larger context to the issue, Jaishankar said: “I conveyed that we hoped that China would follow an independent policy in respect of India, and not allow its policies to be influenced by other countries and other relationships.”

In response to questions, Jaishankar said Wang had not brought up either the Quad — which Beijing refers to as the Asian Nato — or the Indo-Pacific, where India is coordinating with the US, Japan and Australia, all of whom have issues with China.

This is the fourth time Jaishankar and Wang have met in person since the Galwan Valley clash, and despite the pandemic. They first met in Moscow in September 2020 and then twice in Dushanbe, Tajikistan, in July and September 2021, all three times on the sidelines of multilateral meetings.

On the shroud of secrecy around the meeting, which neither capital had announced even after Wang had landed in New Delhi on Thursday night, Jaishankar said the Chinese had “for whatever reason” not wanted an earlier announcement of Wang’s current set of visits.

Before coming to Delhi, Wang had visited Pakistan and Afghanistan. He headed to Nepal from India.