Sons Tejaswi, Tej and party members take out bicycle rally in protest against rising prices of petrol and diesel 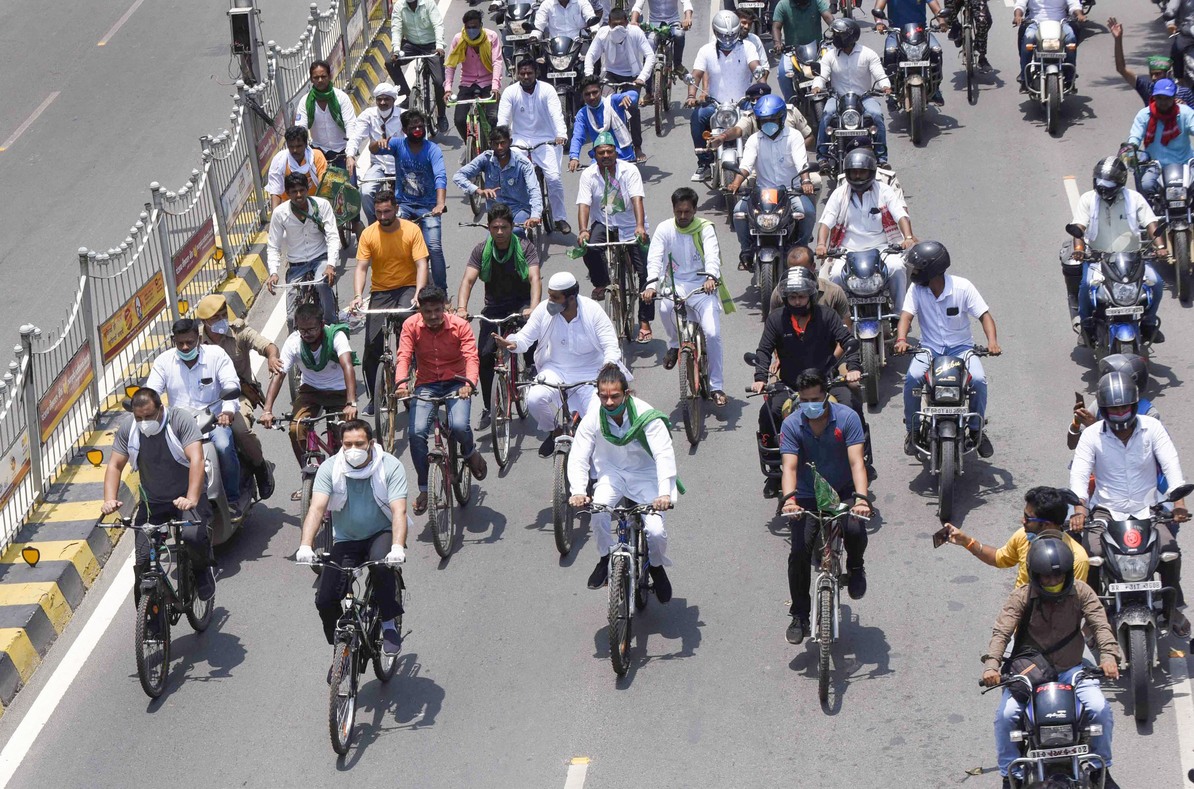 The Rashtriya Janata Dal (RJD) was floated on this date in 1997.

The party came into being as a result of a split caused in the Janata Dal by Yadav, who was then its acting president and feared a defeat at the hands of challenger Sharad Yadav in organisational polls.

The move helped the wily former chief minister to pass the baton to his wife Rabri Devi -- a demure homemaker who had till then stayed away from politics -- when he faced imminent arrest on account of a chargesheet filed against him in the infamous fodder scam.

The party celebrated its foundation day in the absence of its charismatic founding president for the third consecutive year, as Yadav has been away in Ranchi serving sentences in a number of cases related to the scam.

"I was too young back then, so I do not remember much of those days. Lalu is not an individual but an ideology. He is missed not only by us, but the people at large," Yadav's younger son and heir apparent Tejashwi Yadav told reporters before embarking on the cycle rally.

Tejashwi, who under the wings of his father made a spectacular debut in 2015 Assembly polls and went on to become the deputy chief minister at the tender age of 25, is set to face the hustings later this year as his party's chief ministerial candidate and the principal challenger to his former boss Nitish Kumar.

"Bihar owes a lot to Lalu ji in terms of social justice and job creation. Three railway workshops came up in the state when he held the portfolio at the Centre for just five years. At present, when unemployment and petroleum prices are at an all-time high, his interventions would have been invaluable," the Leader of the Opposition in the state Assembly said.

Clad in a T-shirt and track pants, Tejashwi, who stays with his mother in the house allotted to her in her capacity as an ex-CM, thereafter left for the state headquarters on a bicycle, followed by hundreds of supporters who pedaled through the nearly five-kilometer-long route they took to reach Birchand Patel Marg.

Prominent among those who cycled besides Tejashwi was his elder brother Tej Pratap Yadav, who recently returned from a pilgrimage to Mathura.

However, en route, the RJD workers had to encounter gigantic, disparaging posters put up by supporters of the JD(U)-BJP combine, which had decimated the Opposition party in the general elections last year and intends to give it no quarter in the upcoming assembly polls.

The posters carried an image of Tejashwi Yadav calling him "Failasvi", a distortion of the name sought to indicate that he was a failed leader. The posters also listed "24 benami properties" allegedly owned by the 30-year-old RJD leader.

State minister and senior JD(U) leader Neeraj Kumar, who had set the trend recently when he came out with a list of 73 assets allegedly amassed by Lalu Prasad Yadav who celebrated his 73rd birthday last month, chuckled at the posters.

"It is just the beginning. The RJD which stands for nothing except corruption, dynasty rule and patronisation of criminals, will be called out repeatedly for its sins in the days to come," he said.